Geographically, where’s the greatest money-making momentum right now in the marijuana industry? The lotus land of California? The hipster haven of Colorado? The sun-splashed playground of Florida? Nope to all three.

Say hello to marijuana’s new regional powerhouse: the Mid-Atlantic, specifically Virginia, Maryland and the District of Columbia. The area isn’t as staid as you might think. I happen to live in Maryland and I’ve personally observed medical marijuana dispensaries popping up over the landscape, like toadstools in the rain.

Virginia, Maryland and the District are contiguous and highly populated, especially the Washington metroplex that spills over into the two states. The region is home to influential consumers with considerable disposable income. These well-heeled denizens along the midsection of the Atlantic seaboard represent marijuana’s next big growth opportunity.

The financial stakes are huge and bode well for the entire marijuana industry. In a report published March 15, marijuana research firm New Frontier Data estimates that annual sales of cannabis in existing legalized medical markets in Virginia and the District of Columbia will reach a combined $119 million by 2025. If the proposed adult-use laws pass in those two places, the marijuana market could be vast (see chart). 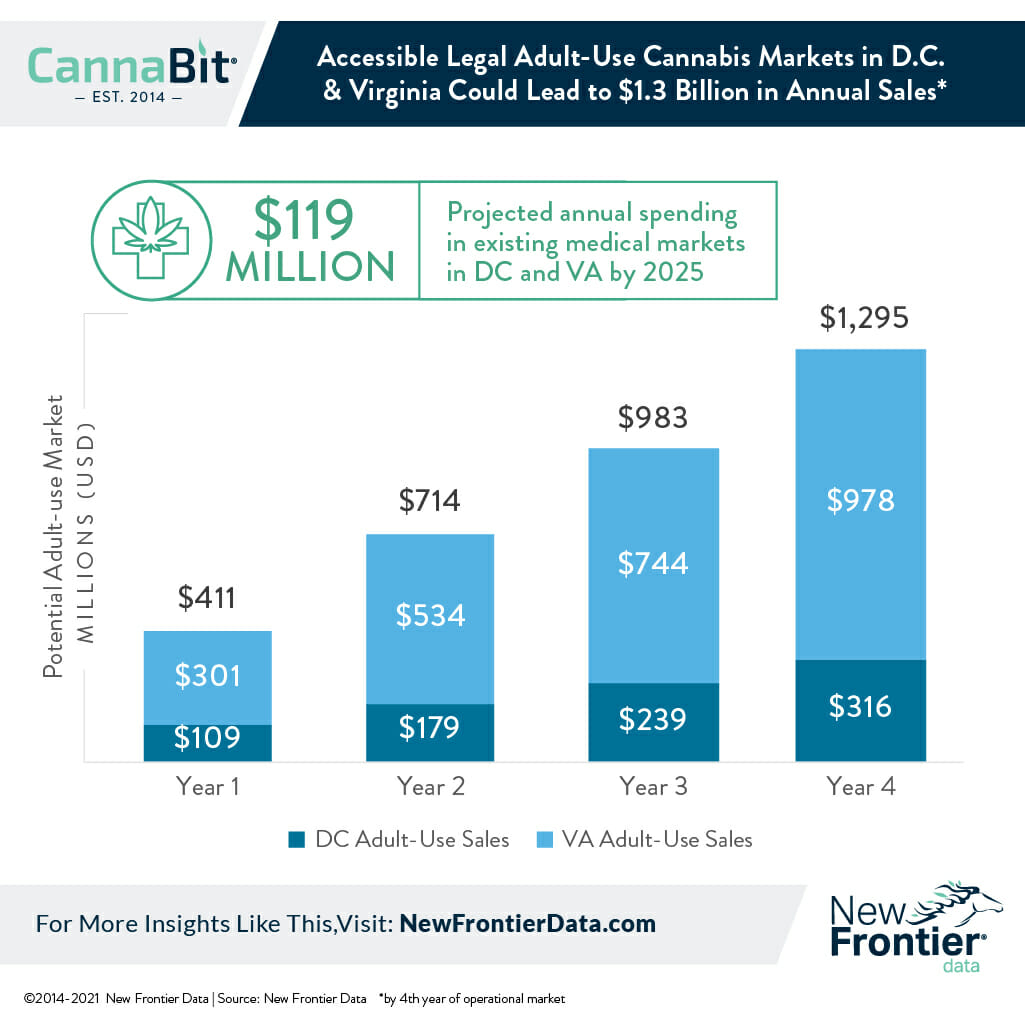 Virginia’s bill now heads to Democratic Gov. Ralph Northam (D), who has indicated that he will sign it. The bill establishes a 21% excise tax on marijuana and allows municipalities to add an additional 3% tax on retailers on top of existing sales taxes. Marijuana tax revenues would be earmarked for funding pre-K education, substance abuse treatment programs, and other public health programs.

Tobacco farmers in southern Virginia have been hit hard by declining sales of tobacco products, in a state where tobacco historically was the major cash crop. Now new cash crops, in the form of marijuana and hemp, are dethroning King Tobacco. Unlike several other states where marijuana is legal, the Virginia law specifically says that licensed cultivation is legal everywhere in the state. The Old South is turning over a new leaf.

DC Mayor Muriel Bowser initiated the proposal to legalize adult-use cannabis in the District. The Safe Cannabis Sales Act of 2021, introduced February 26, would legalize recreational marijuana sales in the District for people 21 and older.

Bowser’s proposed bill would impose a 17% sales tax on pot sales. The move in the nation’s capital is likely to influence other state and local governments.

On the other side of the Potomac, an increasing number of lawmakers in Maryland are getting behind a bill to legalize recreational cannabis this year. The bill allows people to possess up to four ounces of pot for personal use. Smoking in public would carry a $50 fine. The bill’s sponsors claim that legalizing pot in Maryland would generate $300 million a year in additional economic activity in the state.

The bill establishes a graduated excise tax from 10% in 2022 up to 20% in 2027. Local jurisdictions could impose an additional 3% sales tax. In 2012, a state law was enacted to establish a state-regulated medical marijuana program.

State-level lawmakers of both parties are smart enough to read the public opinion polls on marijuana. Americans of all stripes have embraced legalization.

Gallup first gauged the public’s views of marijuana legalization in 1969, when Richard Nixon was president and getting ready to wage what he called a “War on Drugs.” Back then, only 12% of Americans supported normalizing pot laws.

As recent developments in the Mid-Atlantic region make clear, there’s a gold rush taking place in the marijuana market. In fact, a group of ordinary individual investors are earning up to $55,362 a year from one company’s marijuana profit-sharing “program.”

This marijuana company, based in Maryland, is legally obligated to share 90% of its profits with investors across America. As the Old Line State and the rest of the nation increasingly lift restrictions on pot, the company’s fortunes are poised to soar. For details about this unique program, click here.