The World Is Getting Hip to Hemp

There are countless rock and roll anthems to marijuana and psychedelics, but I have yet to hear a rock star rhapsodize about hemp.

The environmental movement is emerging as a key driver of demand for hemp. According to a new report released March 29 by the research firm New Frontier, governments around the world are showing greater interest in hemp as a way to reduce carbon emissions and combat global warming.

More than 30% of total carbon emissions around the world are generated from the manufacture of physical products and materials such as cement, steel, aluminum, and plastic. Sturdy bio-based materials such as hemp are increasingly deployed among a wide range of industries as a way of reducing their carbon footprints.

The Biden administration is putting eco-friendly policies back to the front of the agenda, especially in regard to alleviating climate change. Government spending on renewable resources, in the U.S. and around the world, is poised to soar this year and beyond.

Biomass fuels produce less carbon dioxide than fossil fuels such as petroleum. Biomaterials take carbon out of the atmosphere via photosynthesis, and convert it into useful products.

Hemp fiber conveys significant potential in this realm. The following chart depicts the projected wholesale value of hemp from 2020 to 2025. 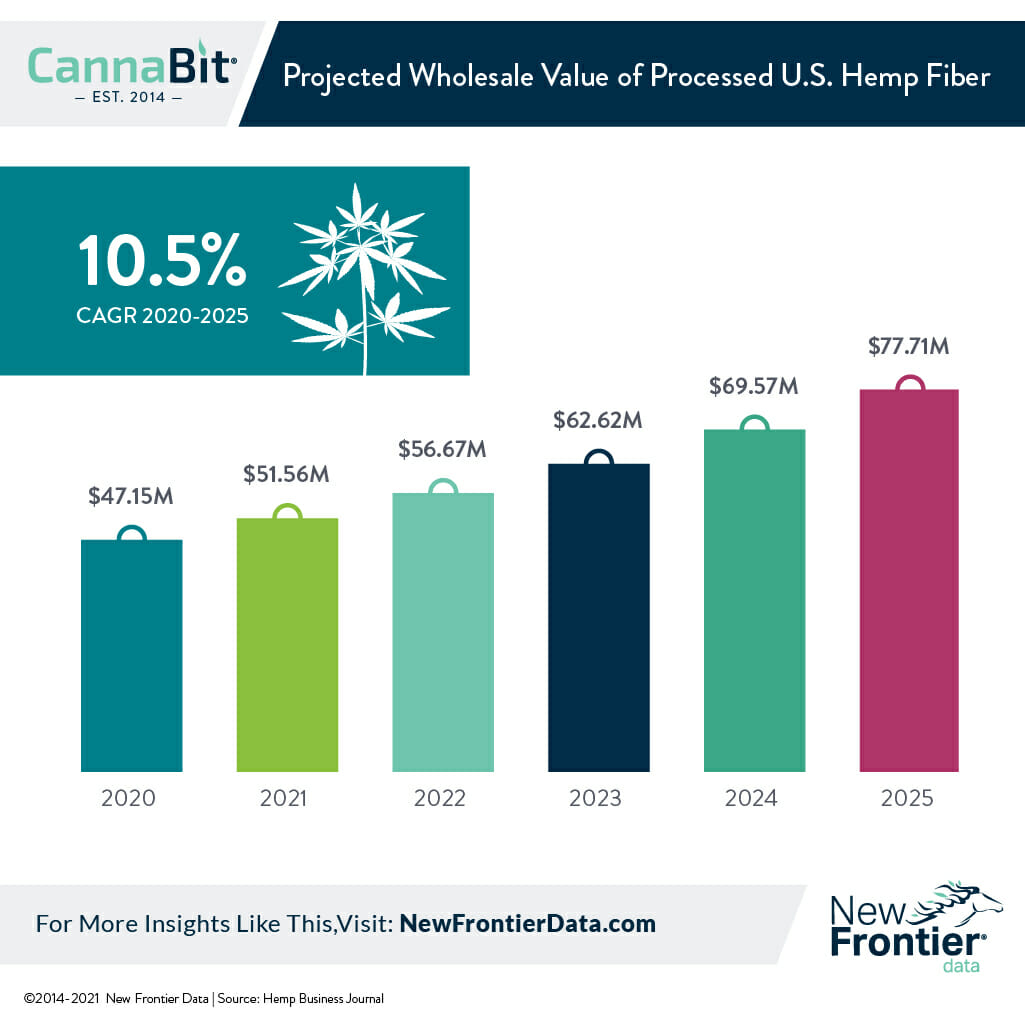 Also consider the growing bioplastics industry, growing at a compound annual growth rate (CAGR) of nearly 14%. Hemp fiber’s strength gives it unique applications within the polymers market, and it is approaching price parity with fossil-fuel-based alternatives.”

My readers sometimes express confusion about the difference between hemp, cannabis and marijuana. Let’s get our terminology straight.

Cannabis the drug and hemp the industrial product both contain tetrahydrocannabinol (THC), the substance that produces the “buzz,” but they are distinct strains with unique chemical compositions and uses.

Hemp is naturally high in cannabidiol (CBD) and low in THC; the reverse is true of cannabis.

Growing industrial hemp became illegal in the 1970s when the federal government strengthened the criminal code on marijuana and related products. Hemp got caught up in the “war on drugs,” but it contains very little of the psychoactive component THC found in marijuana. For decades, hemp has gotten a bum rap.

But these days, hemp is legal (thanks to the 2018 Farm Bill) and corporate America is incorporating the plant within a multitude of everyday consumer products.

Hemp is the strongest natural fiber in the world and boasts up to 50,000 uses, many of them in the industrial sector. Hemp also conveys several food, beverage, health, and personal care applications.

Both marijuana and hemp are sources of CBD, the cannabis-derived compound that consumers increasingly use for relief from muscle and joint pain, anxiety, depression, insomnia, and a host of other psychological and physical ailments.

Cannabis companies are eyeing hemp-related firms for acquisition, as the cannabis industry continues to consolidate. The economic and political trends are clearly in favor of hemp and marijuana, especially the latter. Notably, New York State this week legalized recreational marijuana.

You can reap exponential profits by investing in marijuana and its ancillary sectors. But not all marijuana stocks are created equal. After painstaking research, we’ve pinpointed the best cannabis investments available. Every portfolio should contain at least one pot stock. Click here to learn more.

Questions about profitable opportunities in marijuana and hemp? You can reach me at: mailbag@investingdaily.com