Beware The Wolves of Weed

Stock picking is particularly treacherous in the cannabis industry. Marijuana poses huge investment opportunities, but you need to be careful. Financial wolves stalk the world of weed.

The marijuana industry is pervaded by dubious penny stocks with weak balance sheets. They’re burning through their limited cash, and they’re destined for bankruptcy. The cash flow problems of these small fry are exacerbated by the industry’s chronic difficulty in accessing mainstream financial services. Federal legislation to remove banking impediments for marijuana companies has stalled in the eternally feuding Congress.

Corporate marketing in the marijuana industry often lapses from hyperbole into outright fraud. Many marijuana penny stocks are aggressively promoted, even though they have lousy fundamentals, because they’re pump-and-dump schemes. After the insiders cash out, the sheep get slaughtered.

When researching a stock in any industry, our investment team digs deep into earnings estimates…to look under the hood, so to speak…to gauge the true source of earnings growth. The volatile marijuana industry requires extra effort. Let’s review the key criteria we apply when evaluating a potential pot investment.

For starters, we emphasize the time-proven yardstick EBITDA. That intimidating-sounding acronym stands for earnings before interest, taxes, depreciation, and amortization. EBITDA is a reliable marker for the cash earnings that a company can generate.

EBITDA removes the noise of tax rates, interest payments, and non-cash charges. EBITDA isn’t perfect, but it’s a better metric than growth created by one-time windfalls (say, from a tax cut). It helps separate the true profit catalysts from the smoke-and-mirrors.

Other factors we look for include sufficient cash flow to service debt; professional and experienced management (many marijuana companies are run by amateurs); product diversity; specialization (be wary of a company whose offerings are easily commoditized); and a ticker symbol traded on a major exchange (watch out for the loosely regulated “pink sheets”). Vertical integration (“seed-to-sale”) is another plus.

We also prefer a healthy market cap. Small is fine, but our Spidey-sense starts to tingle when facing micro-caps (between $50 million and $300 million), and we typically shun nano-caps (less than $50 million).

If you make the right choices in the marijuana industry, you can reap exponential gains. After a shake-out in late 2019, pot stocks have been on fire.

The benchmark Amplify Seymour Cannabis ETF (CNBS) has greatly outperformed the S&P 500 over the past 12 months, 75.29% versus 30.75% respectively (see chart). 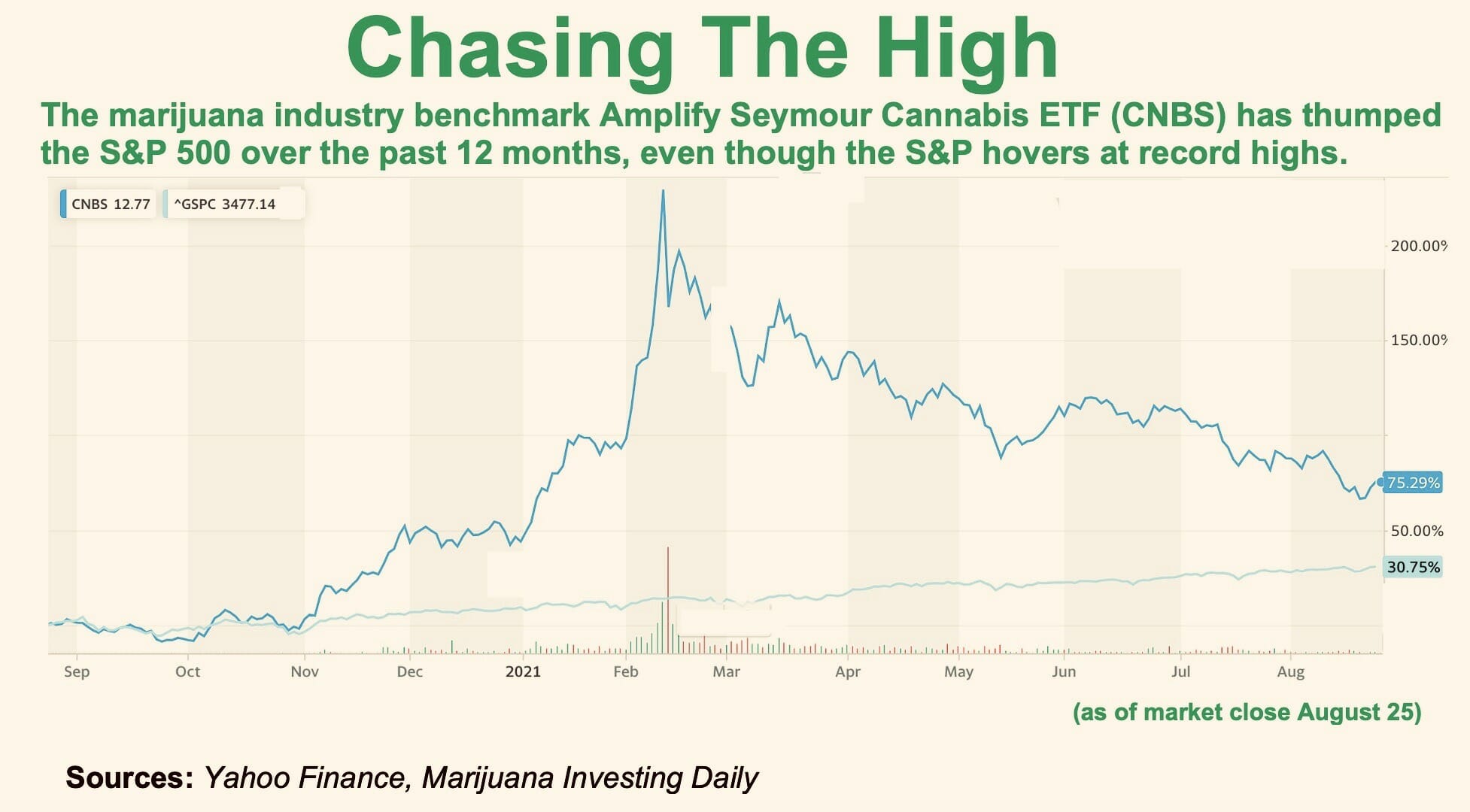 CNBS’ market-beating performance is all the more impressive, when you realize that the S&P 500 currently hovers at all-time highs. To be sure, marijuana stocks have cooled since their highs in February 2021, as exuberance over pro-marijuana initiatives in Congress collided with the reality of persistent political partisanship. Still, over the past year, the CNBS has more than doubled the gain of the S&P 500.

Legalization on the federal level has taken a back seat to President Biden’s top priority of infrastructure investment, but at the state level, legal marijuana is more popular than ever. One factor cementing marijuana’s importance with state leaders is the enormous and growing tax revenue from weed.

Case in point: The California Legislative Analyst’s Office reported on Monday that the state generated $817 million in marijuana excise and cultivation tax revenue in the most recent fiscal year, representing a year-over-year increase of 55%. That amount doesn’t even take into account additional sales and local taxes generated by cannabis.

As a testament to marijuana’s resilience as an industry, sales and tax revenue from pot has been soaring amid the coronavirus pandemic. Marijuana sales flourished under COVID, even though cannabis businesses were ineligible for the federal assistance that was doled out to other industries.

According to marijuana research firm New Frontier Data, if full legalization existed in all 50 states today, we’d see the creation of more than one million new jobs by 2025.

The anti-pot crusaders are stubborn and they’re trying to roll back legalization at the federal and state levels, but it’s my contention that their efforts are doomed to fail. Many “canna-billions” are at stake. If you keep a wary eye on the predators, you can grab your share of the spoils.

Looking to make money from the marijuana bonanza? Applying rigorous criteria, our stock-picking experts have unearthed hidden gems in canna-business that most investors don’t even know about. Click here for our marijuana report.