The Top Stock to Profit from Nuclear’s Comeback

Due to concerns about global warming, many prominent environmentalists who once protested nuclear plants now speak in favor of nuclear energy as a “green” source of electricity.

My own personal evolution is instructive. As a long-haired member of the no-nukes movement in college, I ardently protested nuclear power in the 1970s. Fast forward 40 years and I now embrace nuclear, as a cleaner alternative to fossil fuels. (The story of humankind is a story of endless ironies.)

The search for low-carbon energy is one of the most important long-term investment trends of our time. For all the fuss raised by anti-nuclear activists, the fact remains that nuclear power is a lot cleaner on a day-to-day basis than oil or coal. Nuclear power has gotten considerably safer over the years and it doesn’t emit the gasses that contribute to global warming.

Hurricane Ida, which recently devastated the Northeastern U.S., has cast a favorable spotlight in Congress on nuclear energy. Hurricane Larry now follows in Ida’s wake. As extreme storms probably caused by climate change continue to pummel the world, many energy policymakers would rather split atoms than split hairs.

The demand for uranium should remain strong in coming years. The one company that’s best positioned to profit is the little-known Canadian firm Cameco Corp. (NYSE: CCJ), the largest and lowest-cost uranium producer in the world.

The U.S. and most other countries import the vast majority of the uranium they use as fuel. With emerging markets stepping up plans to build nuclear power plants, a bull market in uranium is unfolding that will extend over many years.

The price of uranium has skyrocketed this week to its highest level since 2015, surpassing $40 per pound (see chart). 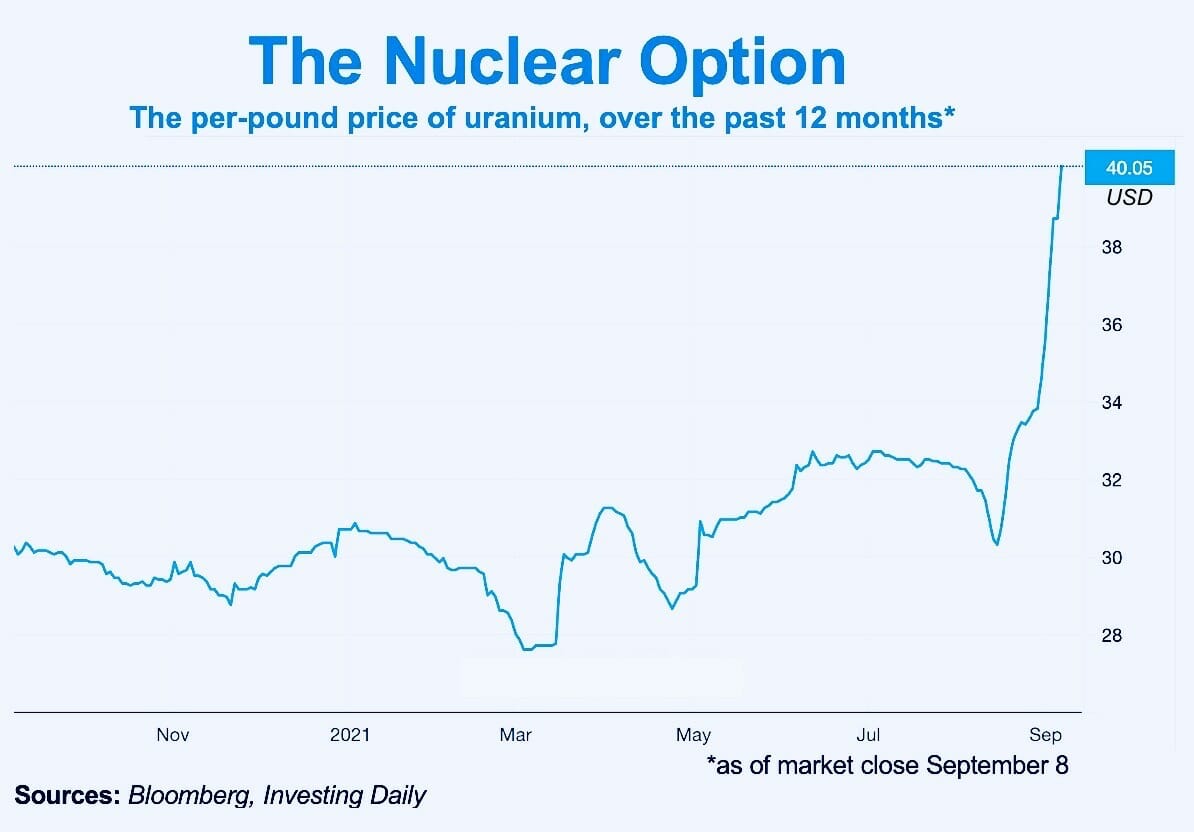 The surge in the price of uranium largely stems from Sprott Asset Management, a Toronto-based alternative asset manager, buying up uranium for its newly launched Physical Uranium Trust. However, uranium prices will probably continue rising, to meet utility demand.

The international climate change accords in Paris, which the Biden administration this year rejoined, endorsed nuclear as a way to reduce carbon emissions.

Since the days of the Obama administration, the federal government has been providing seed money for advanced nuclear designs that are safer and eco-friendlier, as a way to make sure nuclear stays in the U.S. “energy mix” for the next several decades. It’s another example of how government research into new technologies eventually benefits investors.

President Biden’s $1.2 trillion infrastructure bill proposes to revive the nuclear power industry, which provides about 19% of the nation’s electricity.

Cameco owns the production and exploration rights to about 1.9 million acres of land, mostly in Northern Saskatchewan. Canada is the world’s second-largest uranium-producing nation, behind Kazakhstan.

The company also is a leading provider of nuclear fuel processing services, supplying much of the world’s reactor fleet. With a market cap of $9 billion, Cameco is in fact the world’s largest publicly traded uranium company. Cameco’s status as a “mid-cap” stock puts it in the sweet spot for growth. It’s large enough to withstand economic ups and downs, but it’s small enough to confer outsized growth.

Read This Story: Why The Pessimists Are Wrong About China

China continues to make a big bet on nuclear, in large part to wean itself away from coal and to mitigate a horrendous air pollution problem that’s becoming a safety as well as political crisis. The country has 26 nuclear power reactors in operation and 25 under construction, with nearly 100 on the drawing boards for 2030.

Cameco will especially benefit from soaring Chinese demand for uranium. The company is the primary supplier of the country’s “yellow cake” (uranium concentrate powder) under a contract that runs through 2025. India’s accelerating pursuit of nuclear power also will boost demand for Cameco’s uranium.

Cameco employs a conservative marketing strategy, selling around 40% of its production under long-term contracts at fixed prices that provide a cushion when uranium prices are low.

Cameco’s stock has risen 70.5% year to date, compared to about 20% for the S&P 500, making CCJ pricey. However, I think the stock has much further to run, as uranium demand (and prices) skyrocket. Cameco is a play on unstoppable energy mega-trends.

Indeed, prices for a wide range of commodities are surging and should continue their upward trajectory, as global growth and the push for green energy accelerate. For details about a small-cap mining company that’s positioned to reap a windfall, click here now.