Yup, you read my headline correctly. Mary Jane is the new Morning Joe.

In America, coffee and sugary pastries are taking a back seat to marijuana, underscoring how cannabis is increasingly popular with the consumer mainstream.

The numbers are all the more striking, when you realize that coffee is legal everywhere, whereas marijuana is banned on the federal level and in several states. Currently, 18 states and the District of Columbia have legalized recreational marijuana and 37 allow medical marijuana.

Also noteworthy is how pot sales in the U.S. exceeded Starbucks sales in all of North America. The green mermaid is losing out to the green rush.

As a protective measure against a possible recession and bear market, I’ve been advising investors to increase their exposure to “essential services” sectors that have a history of weathering tough conditions. Marijuana has evolved into an essential service.

It’s an investment truism: invest in products that people will always want, in good times or bad. And when it comes to providing a product that people crave the world over, marijuana passes the test. As product choices proliferate, 46% of U.S. consumers report using cannabis daily.

A bevy of cannabis products…

According to a separate survey released May 10 by New Frontier Data, U.S. cannabis consumers increasingly enjoy a wide range of marijuana products. See the following chart: 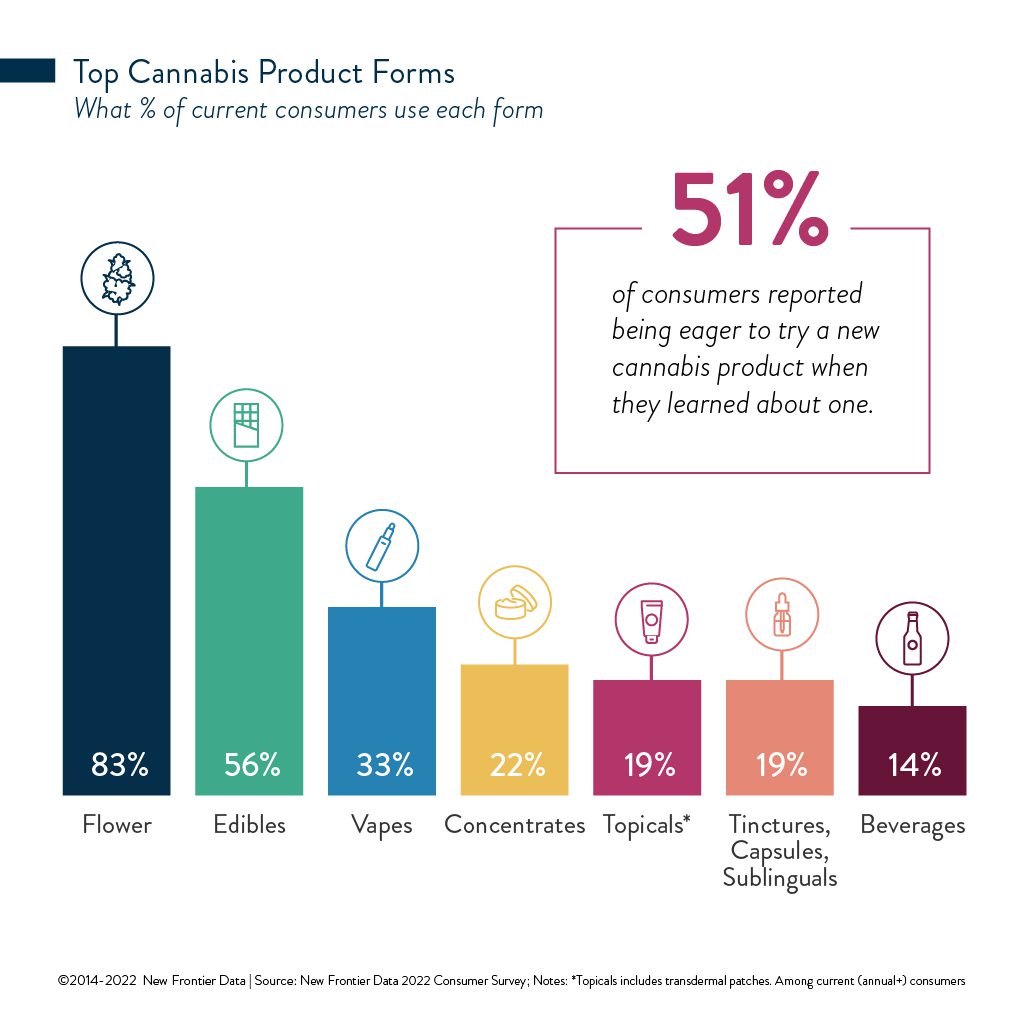 It’s important for cannabis companies and their investors to understand the many nuances of consumer preferences for marijuana. Partaking of weed these days involves a lot more than just lighting up a joint or bong. The panoply of cannabis products is getting more varied and innovative.

Cannabis contains more than 100 biologically active chemical compounds, known as cannabinoids. The most popularly known cannabinoids are delta-9-tetrahydrocannabinol (THC), which produces the “buzz,” and cannabidiol (CBD).

CBD accounts for up to 40% of the cannabis plant’s extract. Unlike THC, CBD isn’t a mind-bending psychotropic. Sales of CBD are driven by claims (some of them hyperbolic) that it confers many benefits, such as reducing pain, calming anxiety, and enhancing mental focus.

CBD is one of the biggest investment opportunities you can find; its presence in grocery stores and pharmacies has become ubiquitous.

During recessions, so-called sin stocks (alcohol, tobacco, etc.) tend to outperform. Add recreational cannabis to the list. Many consumers now ingest a THC-infused edible as casually as they consume a croissant and latte.

In fact, as they contend with shrinking markets, large-cap tobacco companies are buying promising marijuana companies, to diversify their product portfolios and move away from nicotine. Tobacco companies realize that marijuana is competition, so they’re working hard to co-opt it.