In the last issue of The Energy Strategist, we looked at Technical Due Diligence for Investors. This week we examine a particular company, applying some of those due diligence techniques.

Later, the phrase “cellulosic ethanol” was dropped and the company began referring to their product as “renewable crude oil” or as drop-in diesel or gasoline replacements.

The company’s technology is a variation of the fast pyrolysis process. Fast pyrolysis occurs when biomass is rapidly heated to around 500 degrees Celsius. The resulting products are pyrolysis oil—which is a mixture of water and a number of oxygenated organic compounds like acetic acid—and char.

KiOR’s claim to fame is that they use a common oil refining process called Fluid Catalytic Cracking (FCC) technology for the pyrolysis step in a process they call Biomass Fluid Catalytic Cracking (BFCC). The existing product is partially upgraded pyrolysis oil (still very different from crude oil), which is further upgraded to gasoline and diesel blendstocks via another common oil refining process called hydrotreating.

Misleading headlines and simplistic explanations of the company technology aside, the technology is legitimate. There is always the small possibility of fraud when dealing with a company claiming novel technology, but in this case aspects of this technology have been around for a long time. Further, the Department of Energy forecast earlier this year that while the current cost to produce gasoline from pyrolysis oil is well above the cost to produce gasoline from petroleum, by 2017 the cost of pyrolysis-derived gasoline is projected to fall to $2.32/gallon.

As we start the due diligence process on KiOR, we would find that some of the needed information is publicly available. For example, there are many news articles describing KiOR’s steps toward commercialization. They are going through the normal—and for those conducting due diligence, critical—steps of laboratory experiments to pilot facility to demonstration facility to commercial facility.

Thus, KiOR is going through the appropriate scale-up steps. We would still like to know the answers to specific questions about any outstanding technical issues at demonstration scale. These should be resolved prior to scaling up. Some companies believe they will resolve these problems at a larger scale, only to find that the problem is even more intractable at the larger scale.

KiOR was in the news last month because it began to make crude product at their demonstration plant in Columbus, Miss. KiOR CEO Fred Cannon stated in a 2010 interview that the $110 million plant would have an estimated capacity of 750 barrels per day (although some media reports indicate the capacity is 850 barrels per day). The company has announced that it will break ground on a larger facility in Natchez, Miss, in 2013. 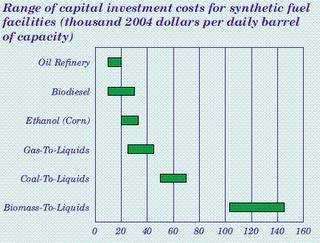 A company press release indicated the Columbus plant would use 500 bone dry tons of biomass to produce “over 11 million gallons of gasoline, diesel, and fuel oil blendstocks annually.” I will spare readers the dry calculations, but a rough energy balance of wood in and blendstocks out indicates about twice as much energy leaving the plant as is entering in the form of wood. This is evidence that there are other substantial energy inputs into the plant, and in fact natural gas is an important feedstock for producing hydrogen used in the upgrading process.

Thus, I note with some irony that this process benefits greatly from the fracking revolution in the US that has driven natural gas prices so low, because the KiOR process is really about half natural gas and half biomass to liquids based on the energy balance of the plant.

The company announced that their projected production cost upon scale-up in 2013 would be $5.95/gallon. They further projected that as they proceed up the learning curve and scale further that the cost of production would fall to $3.73 per gallon in 2014, and then to $2.62 per gallon at full-scale.

Based on this information, a question I would pose for KiOR is around the sensitivity of the cost of production if the cost of wood rises from their presumed cost of $72/ton, and if natural gas prices rise to $6/MMBTU.

These questions barely scratch the surface and are simply meant to illustrate the initial steps. To do an adequate job of technical due diligence on KiOR would require access to additional information, and peeling several more layers of the onion. If we worked through the important questions on KiOR, we would identify some technical risks, but would likely conclude that the technology is promising enough for a possible investment at the right price (and depending on how much appetite for risk an investor possesses).

The focus would then turn to the sort of financial due diligence most investors are familiar with, with particular attention paid to the company’s burn rate. Will they run out of money, or have to secure additional investors in order to continue their operations?

If both the technical and financial due diligence pass muster, the final challenge is to assign a value to the company. Some analysts will value the company as a technology company with a lofty forward-looking P/E ratio, but the company’s business ultimately more closely resembles that of oil refiners, which typically trade at low P/E ratios. Thus, there will be some wild discrepancies over the perceived value of the company.

An oil refiner inputs crude oil and goes through a number of refining steps—utilizing hydrogen from natural gas at some steps in the process—to produce gasoline, diesel, fuel oil, and other finished products. KiOR’s process looks very similar—right down to the refining equipment and the use of hydrogen from natural gas—to produce the same products. The real difference is that KiOR inputs wood instead of crude oil. Therefore, if we know the natural gas and wood inputs, as well as the volumes and composition of finished products, we should be able to calculate a rough crack spread and compare it to the crack spreads of a refinery. Unless KiOR’s crack spreads are far greater, I would argue that the company should be valued similarly to an oil refiner.

A year ago I argued that the company’s then-$2 billion market capitalization was much too high based on:


Since that column was published, the market cap of KiOR has fallen to under $700 million. However, it is more difficult for me to estimate today whether the current valuation is reasonable without obtaining more detailed technical and financial information. KiOR’s odds for long term success are still long, but they have hired competent people (I personally know some of them) to give them the best chance of making it.

KiOR’s share price will continue to be volatile, and the company’s fortunes will be dependent upon obtaining additional financing. In the short term, incentives for 2nd generations biofuels will help ease their burn rate, but there are uncertainties around continuing these incentives. They are also exposed to risks in biomass and natural gas pricing.

But with strong continued government support for 2nd generation biofuels, KiOR has a realistic chance of crossing the Valley of Death and becoming a company that could maintain a viable business, even if they never manage to become a threat to ExxonMobil.