Finding the ‘Squeaker’ in Vera Bradley and Brunswick

I have a new Jack Russell puppy. Thank you for the condolences.  He’s quite cute but likes to chew, especially stuffed dog toys. He attacks them with gusto and the sole mission of finding and removing the squeaker. A brief moment of play is followed by systematic, singularly-focused exploratory surgery (see photo for dramatic effect). 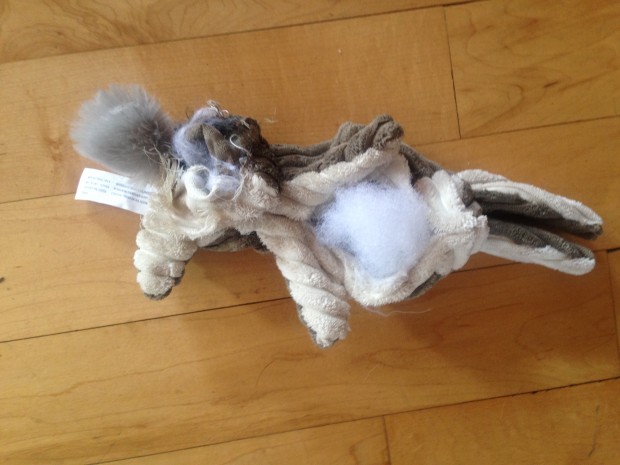 Adorable, but here’s the point: every stock has a squeaker: one metric or trend that must be discovered as it determines the stock’s short-term price action. An analyst’s job (and my job as the resident stock picker for Profit Catalyst) is to find that squeaker for each stock I recommend.

While this metric may not influence the stock’s performance over the long haul, it will be a determining factor in how any stock behaves for a few quarters.

Long term investors typically do not trade based on this super important metric. However, it is critical to be aware of it so that you can make intelligent decisions regarding your investment. If the metric is something that doesn’t change your investment thesis, sit tight and ride out the wave of selling. Alternatively enjoy the thrill of the upward surge when the data is favorable.

Digging Through the Stuffing

Sometimes the squeaker is evident and easy to follow. Obviously, earnings per share and promised revenue targets are squeakers that get stocks moving. Other times, it takes a bit of digging to identify the single metric swaying investor sentiment. However after an additional scouring of company transcripts or a more through analysis a company’s earnings model, the squeaker usually presents itself.

A growth rate is often the most critical metric. Most momentum stocks, typically those that do not earn a significant amount of profit, have their fortunes tied to an ever increasing rate of revenue growth. Investors have a long history of overpaying for companies that can generate increasing revenue growth every quarter. When these stocks hit a speed bump in growth, though, look out below.

For other stocks, it might be a unique internal metric.  Take Electronic Arts, for example.  In late January it reported impressive results, beating earnings estimates with revenue growth of 26%. However, revenue from digital sales came up short. The stock immediately dropped 14% and traded down almost 20% before a recent rebound.

Brunswick, a stock recommended by Profit Catalyst, dropped 7% after reporting earnings in late January. Earnings of 52c were 7c better than expected. Revenue was just 1% shy of estimates, a miss that would not normally inspire such angst for a reasonably priced stock.

Yet a drop in stock price coincident with earnings is not to be ignored. To get a better picture of investor sentiment I spoke with Bruce Byot, head of Investor Relations at Brunswick. Post earnings he spoke with roughly 25 analysts. Over the course of those conversations, he found no specific alarms going off with investors. However, if he had to point to one common concern, it was fear that the marine market would suffer due to weak consumer demand.

Investors are worried about a cyclical rout similar to the one in the earlier recession. Harley-Davidson and Polaris, who sell motorcycles and snowmobiles, recently warned investors that demand had slowed dramatically. Investors assumed demand for Brunswick’s boats and related accessories would follow suit.

So it feels like we’ve found the current squeaker on Brunswick—consumer demand for discretionary items. Recognizing the reason for the weakness gives us more conviction on Brunswick. While we appreciate investors’ concerns, we believe the company is less exposed to the whims of consumers due to its inclusion of commercial fitness equipment maker Cybex, which closed in January.

Vera Bradley, another of our stocks, is up next to show its squeaker. The handbag designer and merchant reports earnings March 9 before the market opens. Current estimates project flat revenue and earnings.

How could flat revenue and earnings be exciting you may ask? Well, the squeaker that is driving Vera Bradley’s numbers is its gross product margin. Vera has been quite successful with the introduction of its new monochrome stylish bags. These bags are priced much higher than the traditional floral patterned ones most are familiar with and produce higher margins.

Flat revenue for this quarter is a function of the company cutting back on distribution to specialty gift shops and lower unit sales due to draconian reductions in price discounts versus last year. Revenue and earnings growth re accelerate in the first quarter.

Gross product margins are expected to improve dramatically and I believe will be one of the most important metrics to watch.

Increased marketing and a year-end accrual of incentive compensation for management (a non-cash charge but Vera does not offer non-GAAP numbers) are responsible for the expectation of flat earnings.

Vera’s purse pals Coach and Michael Kors have both reported strong unit sales of handbags during the holiday quarter. While our bull story does not rest on a recovery in consumer demand, these are welcome beacons of light.

Of course finding the squeaker is just the start of the investment process. While it’s wonderful for a company to keep squeaking that metric each quarter, great stocks are born from companies that continue to build a solid business around that critical data point.