Don’t you hate those annoying ads that scroll across your computer screen blocking the article you’re trying to read? How about banner ads that skip around like Mexican jumping beans when you try to “x” them out? Miss the x, and you’re transported to an ad for something you don’t need or a story you won’t read.

These annoying ads rank with robo calls and junk mail as consumers’ top pet peeves. It’s no wonder investors were alarmed that Criteo (NSDQ: CRTO), a Paris-based digital-advertising firm, would feel the sting of new ad-blocking software rolled out to iPhones last fall. After all, the company earns a fee from advertisers when consumers click on an ad and then collects a bigger fee if that customer buys the advertiser’s product.

But on Feb. 10, Criteo showed investors that its unique technology, which delivers relevant, non-intrusive ads, could overcome any issues with ad blocking on mobile devices. On its earnings call, management guided to higher-than-expected 32% growth for 2016 revenue. 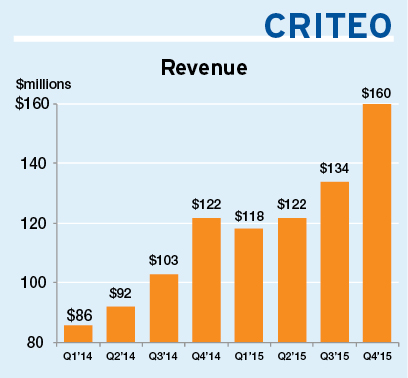 I did just this with Friederike Edelmann, manager of Criteo’s investor relations, who described the company’s edge:

“Advertisers are typically not running silo campaigns (deciding on delivery to PCs or mobile devices separately). Our algorithm decides what platform is best for the ad. In the December quarter 47% of revenue ex-TAC [traffic acquisition cost] was generated on mobile ads. Our win rate is twice as high in mobile, partly because we have so little competition.”

Blocking Is No Barrier

On Feb. 10 the stock traded 5.5 million shares, seven times its daily volume and rose a gigantic 28%. This outsized volume coincident with an up day is the hallmark signal for the Launchpad method, which helps me identify companies with specific and positive earnings’ catalysts.

Criteo’s stock was slammed last year because of fears about ad-blocking software. Apple, whose Safari desktop version has allowed ad blocking for some time, announced last summer that its next system update would include the ability to block ads on mobile devices. Criteo dropped from a high of $55 last summer to a low of $27 before the good news this February.

Like Lazarus rising from the dead, Criteo reported 31% revenue growth in the December quarter. Revenue guidance for 2016, a metric closely watched for cracks due to ad blocking, came in at 32% versus analyst estimates of 22%.

Whether we like it or not, digital advertising is here to stay. While some websites charge a small monthly fee for access, most profit from ad dollars.

And digital ads have evolved at a rapid pace. Flashing, jumping banner ads are becoming a thing of the past. Companies are realizing these intrusive, often offensive ads sap good will and don’t generate much revenue. New technology that allows advertisers to create personalized ads delivered in relevant spots has bred a middle ground where both consumer and advertiser are happy. 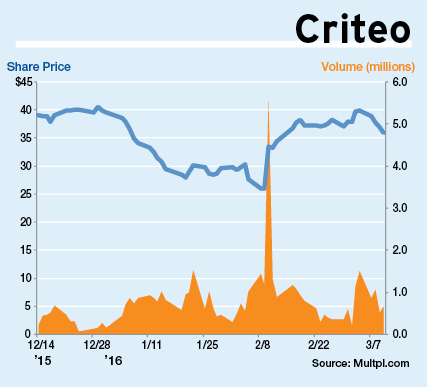 Criteo’s technology embeds browser cookies, tiny files that follow your Internet activity and allow websites to recognize users and their preferences when they return to a site. Criteo does this for about half of the 100 largest retail and travel websites in the U.S.

In the business of data analytics, more is always better. One of Criteo’s integral advantages is the warehouse of data it has been accumulating since 2005. Analyzing this data helps Criteo predict which ad in what spot will be the most effective.

I know it feels creepy when an ad for fishing gear is embedded in your Facebook feed right after you searched for a fly rod on Dick’s Sporting Goods, but these ads work. As we noted above, it is imperative to Criteo’s success that consumers engage with the ads it delivers. It doesn’t get paid otherwise.

The diagram below simplifies the incredibly complex process Criteo uses to deliver its customers’ ads on partner websites.

There has been a marked shift in the balance of power between websites and their readers. In response to ad-blocking software, many publishers offer only limited content to those blocking advertising. After installing an ad blocker on my laptop a few months ago I have been stymied by websites like Forbes and The Atlantic that kindly suggest you turn off your ad blocker to access their content.

After one too many frustrating searches for valuable content, I’ve banished my ad blocker and happily surf any site I choose.

Criteo does not create the ads nor does it own the websites where the ads are delivered. It pays an army of 13,000 publishers for their digital “inventory,” also known as spots where ads can be inserted. Criteo then delivers ads from its 10,000 clients to those spots.

One gripe from investors is the fear that large publishers will connect directly with the advertisers and cut out the middleman. This concern swirls mostly around Facebook, where Criteo delivers 10% of its ads.

Yet Facebook and other publishers have little incentive to shift away from Criteo. As long as its powerfully predictive delivery engine keeps persuading consumers to read ads and respond with future purchases, it will garner higher advertising rates than otherwise.

Luckily for Criteo, Facebook is busy improving user experience and increasing available ad inventory by promoting instant article publishing that allows users to add content to Facebook feeds. Most other publishers share that focus of improving their websites and leave the ad delivery to the experts.

Criteo is one of the only firms offering advertisers delivery across platforms. A consumer who begins searching on his laptop but completes a purchase on his mobile phone can be tracked easily by Criteo. According to CEO Eric Eichmann, over 40% of digital transactions start on one device and end on another. The ability to identify and track a user from desktop to mobile phone is a skill unique to Criteo.

Despite being up another 10% since the February earnings announcement, Criteo still trades at a price-to-earnings ratio below its growth rate. Earnings are expected to grow 24% in 2016 and ramp up another 29% in 2017, yet the stock trades at 16 times 2017’s $2.25 estimate.

Cash flow was a robust $137 million last year. Total net cash equals more than $5.00 per share and continues to build. I see the stock moving up to the low $60s as investors recognize its potential.

Investors should look no further than Criteo to find an exciting way to capitalize on the bothersome but increasingly prevalent trend of consumers spending more of their time scrolling through their phones.