When is one-tenth of a percent worth more than one hundred million dollars? The answer: when Shake Shack disappointed a highly fickle investor base with a lower than expected sales number.

The beloved purveyor of high end burgers and shakes saw its market value seared by almost $140 million when it recently offered an estimate for same store sales growth that was .1% (don’t blink or you’ll miss the decimal) less than hoped for. 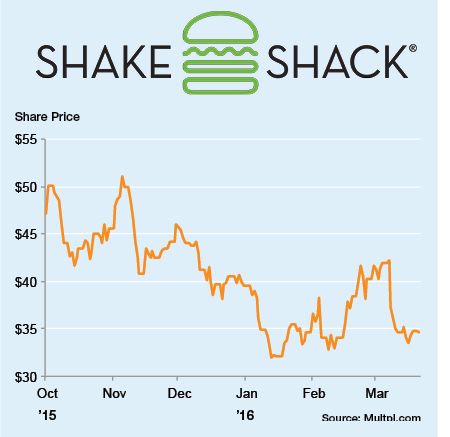 Such is the risk of momentum investing. As I’ve often noted, stocks enjoying generous valuations are also burdened with heaping risk, which is why I avoid them in Profit Catalyst Alert. Investors have little appetite for less-than-stellar guidance for stocks trading at stratospheric multiples.

I like strong growth (and a couple of my Profit Catalyst Alert picks have impressive gains already in 2016) but I don’t like playing momentum games. So let’s take a look at Shake Shack as an example of how fragile momentum stocks can be.

Shake Shack (NYSE: SHAK) reported earnings of 8 cents on March 7, one penny better than expected. Revenue was a hair better than hoped for. However, nestled in the earnings release was a cockroach: guidance for same-store comp sales between 2.5% to 3% for 2016. Investors had officially been expecting 3.1%, but quietly had been expecting a much higher number.

The stock burned up like a patty in a grease fire, dropping 12% immediately. It has been smoldering ever since, and is now down about 18% since the release.

Restaurant companies and retailers are often judged by performance of their “same-store sales,” often referred to as “comps,” which usually looks at sales growth for stores that have been open at least a year. As Shake Shack fancies itself as unique, it calls its comps “Same-Shack Sales.”

These critical comps measure how successful a company is at enticing customers to return to its stores more often, and to spend more money each time. Many restaurants chains that go public (Shake Shack’s IPO was January 2015, and its shares immediately doubled in price) have sales that are increasing rapidly and fuel that growth by opening heaps of new restaurants. Yet companies cannot increase their number of stores forever. 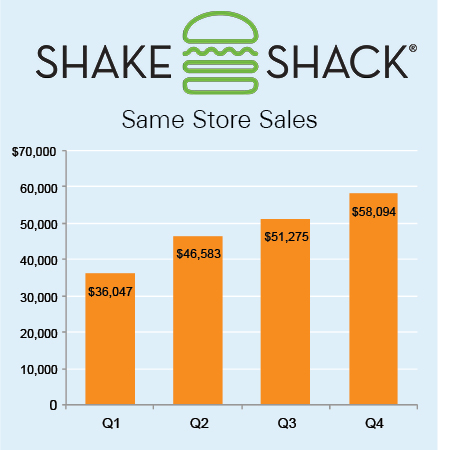 Shake Shack, for example, added 33% more stores in 2015. If each store performed exactly as its predecessors did, revenue could be expected to grow 33%. Investors, however, are always projecting earnings growth several years into the future and need to be confident that sales will continue to expand rapidly even when store growth slows.

The additional benefit of increasing comp sales is the operating leverage it offers a company. Anyone operating a store has a multitude of fixed costs; leases, utilities, people, etc. When those costs are covered and that store sells more, earnings fall right to the bottom line. Conversely, declining comps damage profit margins.

Comps at Shake Shack restaurants have been impressive, increasing 11% in the fourth quarter and 13% for the year.

Eleven percent is a nice number, but still lower than the 17% growth in the third quarter and 13% in the second. You can imagine the heartburn that bubbled up when management offered a 2.5% to 3% comp estimate for 2016.

Despite investor attention to this number I don’t personally think comps are the best metric on which to judge Shake Shack. As with many companies rapidly expanding their number of locations, comps can be swayed by the size and performance of stores being added or dropped into the comp base.

Public companies each have their own definition of what defines the comp base of stores. For Shake Shack, a store is included in the comp base when it has been operating for 24 months or longer. A store’s sales for the first 23 months of operation are included in total revenue but not in comp sales measurements.

For example, in the most recent quarter, only 21 of Shake Shack’s 84 domestic stores are included in the comp base. As you can see, this comp sales number fails to capture the performance of 63 stores opened for fewer than two years! For a quickly growing company this is a huge data gap.

I understand the logic behind measuring sales of a specific unit in January 2016 versus how that same unit did in January 2015. The location, the weather and number of holiday and the size of the unit is the same for both periods. The variability in the numbers can be explained only by differences in performance.

I find it more useful to look at sale per average store or average weekly sales for companies with a multitude of stores. This metric captures the performance of all stores operated by the company and has more direct correlation to reported revenue. 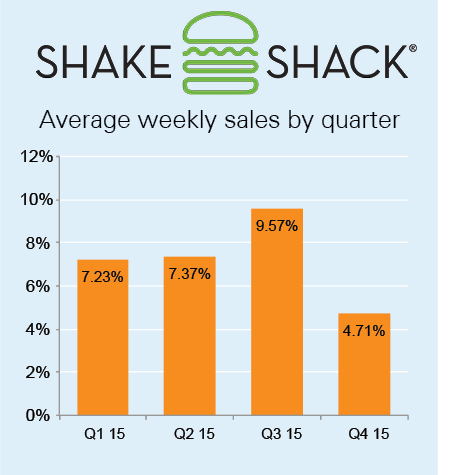 The bad news for Shake Shack is that growth in average weekly sales is slowing also. Despite a sales boost from adding new limited time only (LTO in company parlance) burgers and three LTO holiday shakes (gingerbread, Christmas cookie and chocolate peppermint – in case you were hungry), growth of average weekly sales in the fourth quarter slipped to 5% from 10% the prior quarter.

The slightly radical addition of chicken to this beef-laden menu will help increase sales but higher labor costs for this product will put a lid on profits.

Shake Shack trades at nauseating 71 times 2017 estimates. This kind of multiple is hard to swallow while numbers are on the upswing but is downright ulcer-inducing when a company hits speed bumps.

The mix of decelerating growth and a monstrous valuation is a bad recipe for this stock. So you won’t find companies such as Shake Shack on the Profit Catalyst Alert menu.