Every time crude oil nears $100 per barrel, you can count on the media to focus on how rising prices at the pump are pinching consumers. These days, pundits describe $100 oil to a major “tax” on the consumer that endangers the nascent economic recovery.

My 2011 outlook calls for crude oil to top $100 per barrel in the first part of 2011. In fact, several grades of crude oil have already topped the triple-digit mark, while others, such as all-important Brent crude, have come within a few cents of the century mark.

Although higher energy prices will weigh on consumer spending, $100 oil isn’t some wild card that will suddenly wreck household budgets. US consumer spending hasn’t returned to the robust levels witnessed during the credit boom, but American shoppers have exhibited few signs of concern about energy prices.

Meanwhile, higher oil prices are far more affordable to the average Chinese consumer than just a few years ago, thanks to rising incomes and currency appreciation.

Oil prices would need to jump to $120 per barrel–a distinct possibility later in 2011–to measurably affect US consumers’ spending habits. But oil would have to remain at this elevated level to have an adverse impact on the economic recovery. 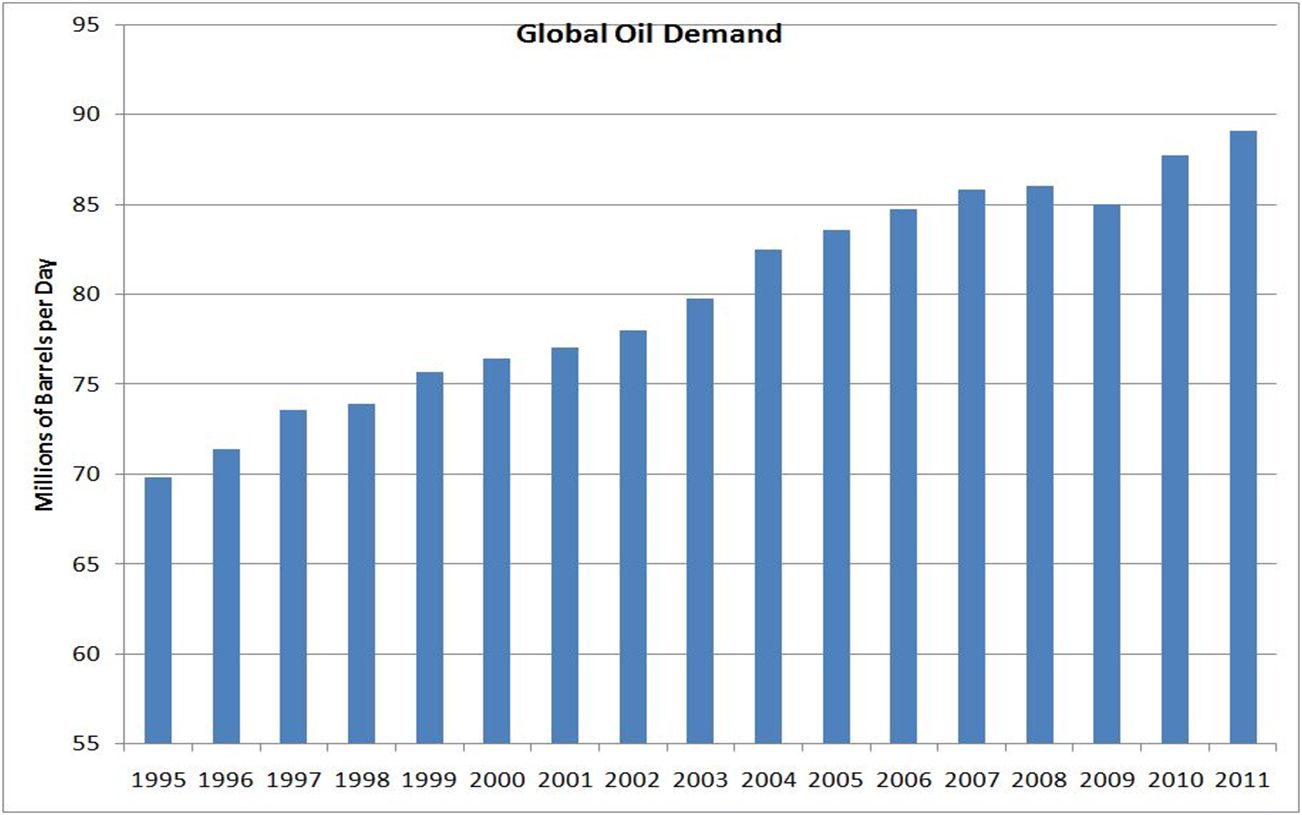 Oil supply is a more complex matter. Non-OPEC oil supply growth was robust in 2010, expanding by 1.1 million barrels per day. Russian output jumped by about 250,000 barrels per day, while US production increased by 360,000 barrels per day in 2010. These gains were offset somewhat by declines in the North Sea and Mexico, among other regions.

The surge in non-OPEC production stemmed from the billions of dollars in investments made during the 2003-08 oil boom. This supply growth should slow to about 600,000 barrels per day in 2011.

But with global oil demand rising faster than non-OPEC supply, there are two possibilities: OPEC will dip into its spare capacity to pump more crude oil or global inventories will decline rapidly this in 2011. Either eventuality is bullish for oil prices, but the latter scenario is more likely. OPEC appears comfortable with crude oil priced between $90 and $100: In December, it’s estimated that developed-world inventories plummeted by more than 33 million barrels of oil and refined products.

Meanwhile, many US pundits continue to kid themselves by focusing on West Texas Intermediate (WTI) crude oil prices. The official delivery point for WTI is Cushing, Okla., where a short-term glut of oil has depressed regional prices. As a result, WTI has traded at record discounts to other US crude oil benchmarks such as Light Louisiana Sweet (LLS) and key international benchmarks such as Brent crude and the official OPEC reference basket of oil. Brent has traded as high as 98.11 per barrel in 2011, while Tapis, a Malaysian benchmark, has traded as high as 104.78 per barrel.

Oil Prices: $100 Oil and the Consumer

Oil prices over $100 per barrel always give rise to a debate about inflation. But as I explained in the most recent issue of Personal Finance Weekly, Inflation Returns, fuel prices aren’t that big a component of household expenditures in the developed world.

Household fuels–heating oil, natural gas and electricity–account for another 5 percent or so of total consumer expenditures, but the number of consumers using oil for heat continues to decline. Meanwhile, natural gas prices are depressed, and December electricity prices were down from a year ago. Overall, household fuel costs rose just 0.8 percent year over year.

As much as Americans gripe about rising oil prices, the average urban consumer doesn’t spend much of his or her disposable income on gasoline. Individual circumstances vary from the averages used by BLS, but rising fuel prices aren’t the driving force of consumer spending that some assume them to be.

The average American consumes about 23 barrels of oil per year, including oil used for transportation, oil used by industry and oil used in plastics and other products. If oil increases to $105 per barrel from $90 per barrel, that amounts to an additional $340 in annual spending per person–slightly less than 1 percent of the average American’s $37,000 in annual per capita disposable income. I’m not arguing that rising oil prices and imports are good for Americans or the country but it’s hardly a death-knell for spending.

And despite the headlines, there’s no sign that Americans are worried about rising oil prices right now.

Oil prices last exceeded $100 per barrel in 2008. That summer oil soared to close to $150 per barrel, and Americans stopped buying trucks and sport utility vehicles (SUV) in favor of more fuel-efficient smaller cars. You may recall all the headlines about the death of the Hummer, those giant military-inspired urban assault vehicles that were infamous gas guzzlers. 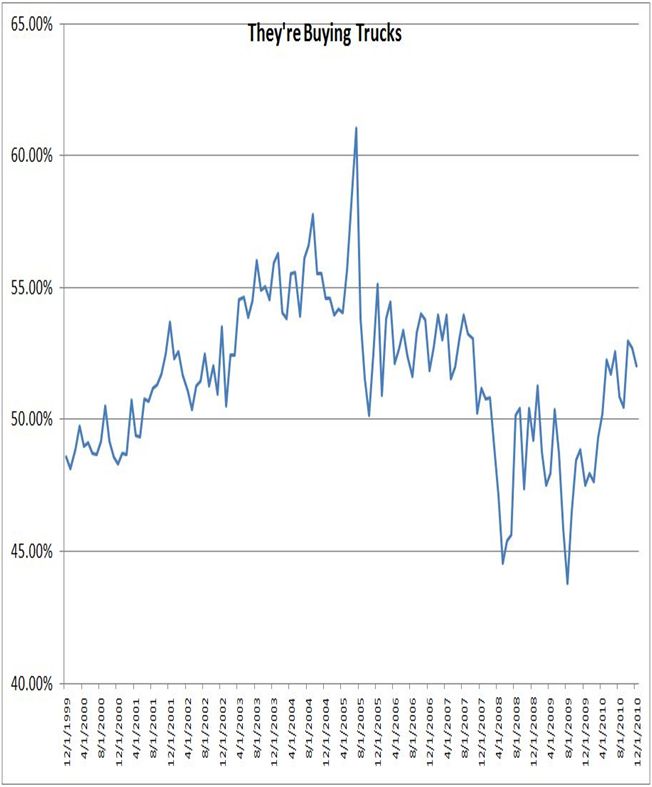 This ratio took a dive in spring 2008, about the time oil prices approached $120 per barrel. At their lows in 2008-09, trucks accounted for less than 50 percent of total US vehicle sales.

But this ratio is rising once again. Total US car and light truck sales have increased from about 9.5 million annualized units at the depths of the recession to just under 12 million as of the most recent data. More important, consumers are back to buying big vehicles: Trucks and SUVs once again account for about 53 percent of total vehicle sales.

Rather than listening to consumers complain about rising oil prices on the local news, watch their actual behavior: If households were worried about oil hitting $100 per barrel, it’s unlikely they’d be buying pickups and jeeps.

But in countries such as China and India, fuel prices are a much larger percentage of total expenditures than in the US or other developed nations.

That doesn’t necessarily mean that higher prices are a bigger problem in emerging markets. Disposable income has increased steadily in recent years in the developing world.

For example, since 2005 per capita disposable incomes in China have increased at a more than 12 percent annualized rate in local currency terms. In US dollar terms, per capita Chinese income has been rising at an annualized pace of almost 20 percent. A rapid jump in disposable income always drives demand for energy. Because personal incomes are much higher than in 2008, Chinese consumers can better afford higher oil prices today than they could in 2008. A similar logic holds in most of the major emerging markets.

Currency effects are also important. Oil is priced in US dollars, so the appreciation of most major emerging market currencies against the dollar makes oil less expensive and more affordable. Oil prices in dollar terms have rallied steadily since the first quarter of 2009, but emerging markets have been insulated from some of that impact because of currency effects. For example, the Indian rupee is up about 12.5 percent since early March 2009, the Brazilian real has rallied about 30 percent, and the Russian ruble is up about 15 percent against the dollar.

The media loves round numbers like $100 per barrel, but in reality oil demand is less price-sensitive that many pundits would lead you to believe.