The broader market snapped a five-day losing streak on Wednesday, racking up two days of gains that count as among the most powerful rallies of the year. However, it’s common to see the market put together 1 to 3 day rallies in the context of a correction. I’m still looking for the S&P 500 to undergo a total pullback of at least 7 percent to 10 percent from recent highs before this downdraft is over. This targets a range of roughly 1,275 to 1,325 on the S&P 500.

Some of the bearish factors I’ve been warning about in PF Weekly since the beginning of March are coming to the fore. In particular, the European sovereign-debt crisis appears to be deteriorating, with an increasingly negative affect on credit markets. Moreover, we’re beginning to see the first concrete signs that the stronger-than-expected US economic data since late last year may partly stem from seasonal factors, a trend that I’ve been warning about.

In last week’s issue, I wrote about the spike in Spanish and Italian government bond yields since the beginning of April, eerily reminiscent of the spike in the same nation’s borrowing rates in the summer of 2011. Yields saw a temporary respite mid-week because of a successful Italian bond auction, but yields on the benchmark 10-year Spanish government bond now stand at just shy of 6 percent, up from a low of around 4.82 percent in late February and early March. Yields on the Italian 10-year now stand at slightly over 5.5 percent, up from a low of under 4.8 percent just over a month ago.

The country to watch last year was Italy, but the nation has since introduced major economic reforms, putting it in better economic shape than Spain. While Italy’s debt-to-GDP ratio of around 120 percent is far higher than Spain’s, Italian citizens have lower household debt and the banking system is sounder. In Spain, there’s a huge question mark hanging over the banks and their exposure to soured real estate and construction loans.

While Spanish and Italian sovereign bond yields remain well under their 2011 highs, the credit default swap market is beginning to paint a more sinister picture – check out my chart below for a closer look. 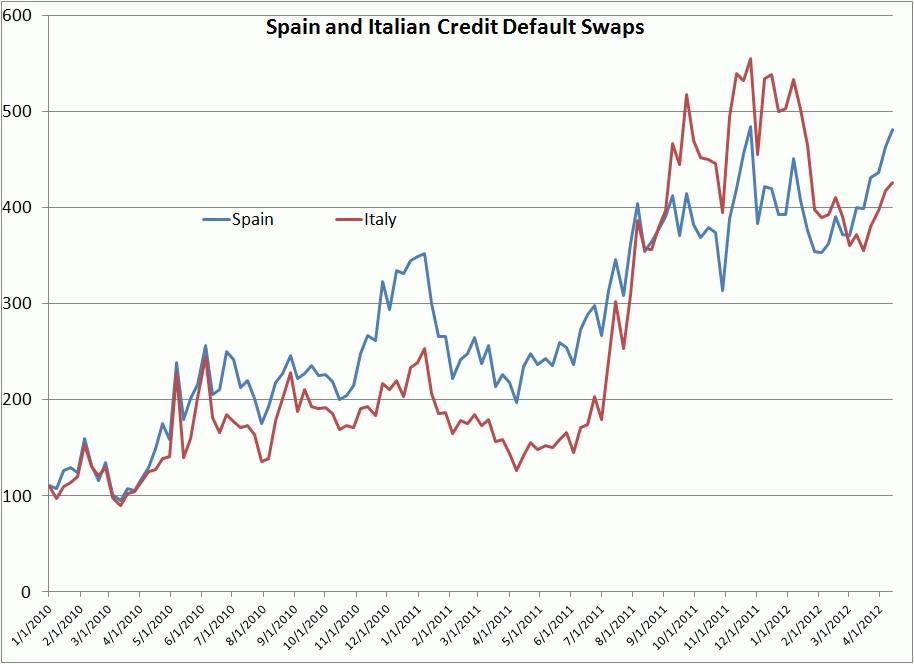 Credit default swaps (CDS) are essentially an insurance policy that pays out if the underlying borrower defaults on their debt. These credit default swaps show the cost of insuring Italian and Spanish government debt against default over a five-year term.

As the chart illustrates, both Italian and Spanish five-year default swaps fell sharply since late last year and bottomed out in March-April of this year. Italian CDS prices have spiked somewhat but remain well under their late 2011 and early 2012 highs. Spain’s CDS are a different story entirely – the yield on Spanish 5-Year CDS are now back to the same level as their 2011 highs. In fact, the 10-year Spanish CDS briefly hit a new record high on Friday, April 13. This suggests that the market is now far more worried about Spain and Spanish banks than it is about Italy.

This is a big reminder that while the European crisis may have improved somewhat it is far from solved. A new flare-up of the EU credit mess remains a considerable headwind for global markets.

Despite the alarmist headlines, some good news exists. Spain’s economy is smaller than Italy’s and consequently may be less expensive to prop up. More importantly, while worries surrounding Spanish banks have intensified, interbank credit markets in the US and Europe remain largely unaffected.

Long-time subscribers should be familiar with the TED spread, an index I track on a continuing basis. The TED spread measures the difference in yield between three-month interbank loans and the three-month US Treasury bill. TED is an acronym formed from T-bill and ED, the ticker symbol for the Eurodollar futures contract.

When the TED spread spikes it indicates that banks are becoming less willing to lend to one another. At the height of the 2008-09 credit crisis, the TED spread spiked to levels well over 400 basis points (4 percent), a level that indicated interbank credit markets had essentially ceased to function. 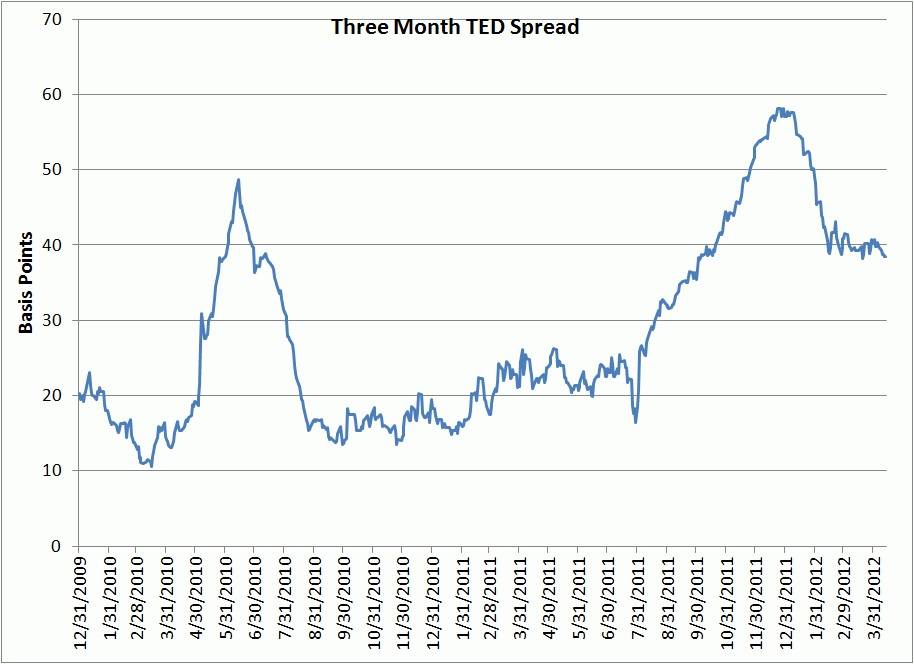 While the TED spread isn’t yet at levels that are a huge concern, the decline that started late last year has come to an abrupt halt and the Index is hovering at elevated levels. While this suggests interbank credit markets are healthy, I’d feel more comfortable if the TED spread declined back under 30 basis points in coming months. A move back over 45 or so on this index would raise concerns the EU credit crisis is intensifying.

A steady decline in US initial jobless claims—the number of people filing for first time unemployment benefits–since last year has supported the broader stock market. In that light, this week’s spike in claims to 380,000 from an expected 350,000 to 360,000 was an unwelcome surprise. I tend to track the four-week moving average of claims more than the raw data, because the latter is notoriously volatile, but even on that basis, claims increased.

Normally I would simply shrug off this miss, because it’s not at all unusual to see one-week blips in claims. In addition, there can be unusual patterns in the data around holidays, so the timing of Easter this year may have skewed the data and complicated seasonal adjustments.

Nonetheless, a potentially more sinister explanation is that seasonal adjustments in the month of April are smaller than in the January through March period because, in a normal year, the weather would begin to turn better by April. With the US experiencing its fourth-mildest winter since 1900, data from November through March might have been artificially inflated by the government’s seasonal adjustments. With those adjustments fading, we may be beginning to see the real employment trends in the US.

Bottom line: with the market still trading sharply higher from its late 2011 lows, stocks were already vulnerable to some profit taking. A modest intensification of the EU credit mess and the slight deterioration in US economic data should be enough to catalyze at least a modest additional pullback.

As I have been recommending for some time, investors should look to take at least some of their profits off the table in big winners and raise cash to deploy as the market comes off the proverbial boil. In Personal Finance, I have been beefing up our exposure to more defensive market groups such as the consumer staples.