Europe Debt Crisis is Back!

The upward momentum of the S&P 500 has been broken. After hitting a nearly four-year high of 1,422.38 on April 2nd, stocks have fallen 3.5 percent over the following three weeks. The S&P is still up a healthy 9.1 percent for the year, and a 3.5 percent decline is a mild drawdown, so there is no need to be overly concerned.

First-quarter corporate earnings have come in better than expected, with 72 percent of companies beating analyst estimates – the highest percentage since the first quarter of 2006. Furthermore, the percentage of companies raising guidance for the second quarter exceeds the percentage of companies lowering guidance by 2.4 percentage points – the largest positive divergence in the last four quarters and the first positive divergence since Q2 2011.  Keep in mind that the S&P 500 actually fell 2 percent in the second quarter of 2006, so companies beating analyst estimates don’t guarantee a bullish stock market.

U.S. economic data has remained modestly positive, but March orders of durable goods fell by the largest amount in three years, probably due to weakness in Europe.  Economists are expecting the overall U.S. economy to slowdown later this year based partly on “rising anxiety” about the presidential election, as well as a “massive fiscal cliff” facing the U.S. economy in 2013. The cliff would occur if Congress and the White House cannot agree on extending two tax-cut programs beyond their expiration date at the end of 2012: (1) Bush-era tax cuts that cut high-income marginal tax rates, as well as the capital gains tax rate and the tax rate on dividends; and (2) the two-percent reduction in the payroll tax from 6.2 percent to 4.2 percent. Economists estimate that if these tax-cut programs are allowed to expire, 83 percent of Americans would see taxes rise, including virtually everyone who makes $60,000 or more per year. The tax burden on the average U.S. household would increase by $3,000 and result in a 5-percent decline in after-tax income.

Combine all this with automatic spending cuts of $1.2 trillion over 10 years caused by the failure of the congressional “Super Committee” deficit-reduction talks last year, and you have – according to former Fed Vice Chairman Alan Blinder — the recipe for an “abrupt fiscal contraction of 3.5% of GDP” that would tip the U.S. back into recession. According to the Economic Cycle Research Institute (ECRI), a recession is likely regardless because the developed world has entered a period known as the “yo-yo years” where recessions will occur much more frequently. Don’t expect the housing market to rebound and save the U.S. economy. In March, new home sales dropped 7.1 percent and Yale economics professor Robert Shiller recently stated that the housing market may not experience a major recovery “in our lifetimes.”

Europe Debt Crisis is Back!

The European debt crisis is back in the news. On the positive side, the International Monetary Fund (IMF) announced that it received more than $430 billion in new funding commitments from member countries to stave off a sovereign default, nearly doubling the agency’s reserves available for loans to almost $1 trillion. The IMF also raised its forecast of global economic growth for the first time since early 2011.

On the negative side, the IMF warned of a “prolonged period of deflation” in the Eurozone if more financial stimulus is not forthcoming from the European Central Bank. In addition, French President Nicolas Sarkozy – a key ally of German Chancellor Angela Merkel and a strong proponent of the Euro fiscal compact signed in March – became the first French president in more than 50 years to lose the first round of an election and is almost certain to lose the  runoff election on May 6th against Socialist Party chief Francois Hollande. A Hollande victory could destabilize the Eurozone because Hollande has threatened to veto the Euro fiscal compact. On Monday after the French election, Germany’s stock market fell by the largest amount in the past six weeks. German business confidence rose in April for the sixth consecutive month, however, defying expectations for a slowdown.

More Eurozone instability could also result from the collapse of Netherlands’ government. Dutch Prime Minister Mark Rutte was forced to resign after a right-wing member of his minority coalition government withdrew in protest over proposed spending cuts aimed at bringing the country within Eurozone fiscal guidelines. The Netherlands is now considered in jeopardy of losing its triple-A credit rating.

Oh, and Spain is back in recession with the government now forecasting a 1.7 percent GDP decline in 2012. Spanish government 10-year bond yields are creeping up to the 6-percent level and will probably rise further as the contracting Spanish economy – helped along by the largest spending cuts since the Franco era — makes the country’s debt situation even worse. Speaking of worse, Greece expects its economy to decline a whopping 5 percent in 2012, more than previously forecast.

Back to the U.S. stock market . . . .  Apple has jumped 10 percent this morning (Apr. 25th) on its great first-quarter earnings and that means the entire market is up big because Apple’s $573 billion market cap is such a large part of the indices.  Is this the start of a sustainable market rebound? According to Morningstar, Apple’s profit margins are “not sustainable” so the stock’s price jump may be short-lived. NYU finance professor Aswath Damodaran – someone whose equity valuation skills I respect highly – recently sold his Apple shares after having owned them since 1997.

Prior to today’s Apple-induced stock-market rally, the S&P 500 was set to close below its 50-day moving average for the second consecutive week (it still might, since it’s only 2 points over it as I write).  If it does, it would mark the first time this has occurred since the panic lows back in October 2011!  I would view this as a negative technical condition that suggests further downside towards (but perhaps not reaching) the S&P’s 200-day moving average around 1280. 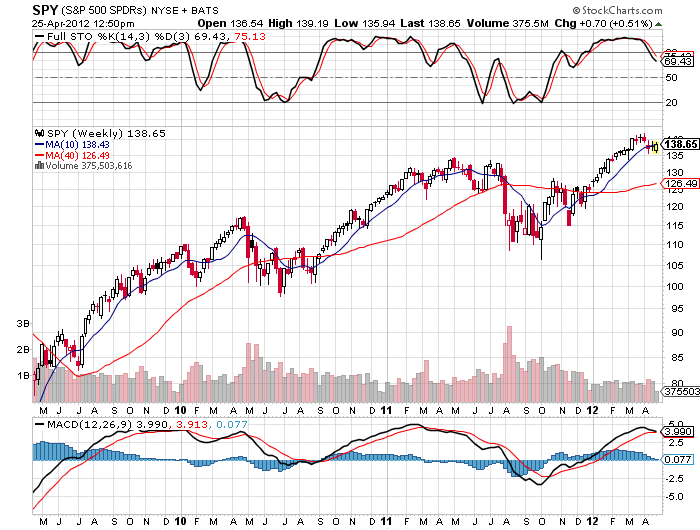