As we’ve been anticipating in this column for the past two months, the US economy has clearly entered a soft patch of weaker economic growth for the third summer in a row. Given chronic instability in European credit markets, a marked deterioration in US economic data and growing uncertainty ahead of the 2013 US “fiscal cliff,” I’m looking for at least another 1 to 2 months of pain before equity markets find a durable bottom.

Even when growth in non-farm payrolls disappoints expectations, there’s often at least a glimmer of positive news elsewhere in the monthly employment report from the US Bureau of Labor Statistics (BLS). However, even the most dedicated optimists would have trouble finding any good news in the May Employment report.

Total non-farm payrolls rose just 69,000, less than half the 150,000 expected by economists heading into the release. In addition, the BLS revised payroll growth for March down by 11,000 and slashed April payroll gains from an already disappointing 115,000 to just 77,000. Over the past three months, the US economy has added fewer than 100,000 new jobs on average compared to payroll gains of more than 200,000 per month in the October through February period.

The widely watched May Employment report wasn’t the only crucial piece of economic data hitting stocks on Friday. The US Purchasing Manager’s Index (PMI) for Manufacturing fell from 54.8 to just 53.5, compared to expectations for a less pronounced drop. And China’s official Manufacturing PMI fell from 53.3 in April to just 50.4 in May, significantly worse than the 51.5 expected. While any level over 50 indicates expansion, the sharp drop in China’s PMI is bound to prompt predictions of a hard landing in China.

The good news for investors is that some of the weakness in US economic data is a mirage. For most of the past winter, I have been writing that unseasonably warm winter weather threw off the government’s normal seasonal adjustments making underlying data look better than it actually was. Now, we’re seeing the seasonal payback. Because negative winter seasonals weren’t as strong as usual this year, neither is the normal springtime mini-boom.

This seasonal impact is evident in the May Employment report. In a normal winter, companies halt or slow construction projects during the coldest months, putting some workers on furlough. To counteract this effect, BLS seasonally adjusts the data by adding construction payrolls during the winter months to offset the normal slump.

Given the balmy winter of 2011 to 2012, many construction projects continued through the winter months, so the seasonal slump in construction employment was not as pronounced as it normally would be. However, because the BLS seasonally adjusts data using average historical trends, it over-adjusted for the normal seasonal decline.

In May, typically a much stronger month for construction employment, payrolls in the industry fell by 28,000. This is the seasonal payback—the BLS is subtracting construction payrolls to offset the normal seasonal uptick in hiring heading into the summer months.

I am also encouraged by the fact that employment data released by payroll processing giant ADP did not deteriorate as much as the BLS data this month. ADP showed private payroll gains of 133,000, up from 113,000 in April. Over the past quarter, ADP has estimated the US created nearly 150,000 private sector jobs per month compared to 209,000 in the October through February period. While that still represents deterioration, 150,000 jobs per month is a good deal healthier than the 100,000 jobs the BLS has estimated.

In the past, ADP data has also appeared less sensitive to weather-related disruptions than BLS data, so the divergence between these two measures may indicate that weather trends are behind a large portion of the decline in May payrolls.

As for China, while economic data has clearly deteriorated in recent months, the numbers are far from levels that would indicate risk of a hard landing. Investors also should not forget that the Chinese government has multiple levers available to stimulate the economy, including further cuts to its bank reserve requirements or, if necessary, some sort of fiscal stimulus plan. Recent comments from China’s Premier Wen Jiabao indicate that the country is now focusing its attention more on promoting growth rather than fighting inflation.

Europe remains a concern as well. Spanish 10-year government bond yields recently spiked over 6.5 percent, their highest level since the height of last year’s European sovereign debt crisis. It’s looking increasingly likely that Spain will need a bailout or bank recapitalization aid from the EU to prevent borrowing costs from spiraling out of control. And, of course, investors continue to monitor the polls in Greece ahead of that country’s June 17 elections.

The most obvious sign of strain in Europe is that investors are piling into what’s considered the Continent’s safest asset: short-term German government debt. As the chart below shows, German 2-year bond yields actually dipped into negative territory at one point last week and are down from a yield of 1 percent as recently as the middle of 2011.

A negative yield implies that investors were actually willing to pay the German government for the privilege of lending that government money over a two-year period. When investors favor a guaranteed small loss to the risk of a much larger potential loss in the stock market or corporate debt, you know that panic is the main emotional driver.

What’s even worse news is that we’re beginning to see signs that Europe’s credit woes are spilling over into the US credit markets. 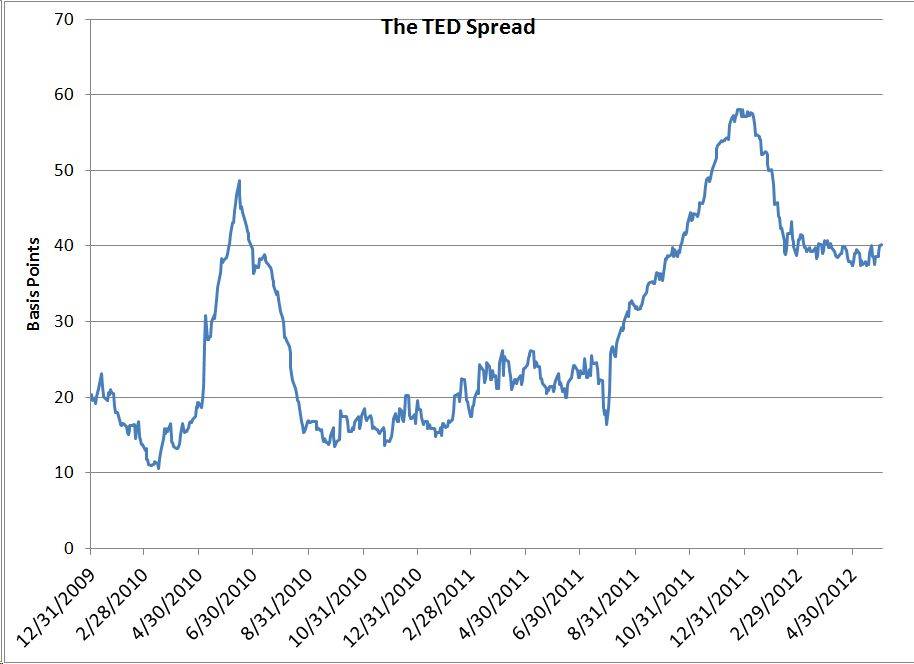 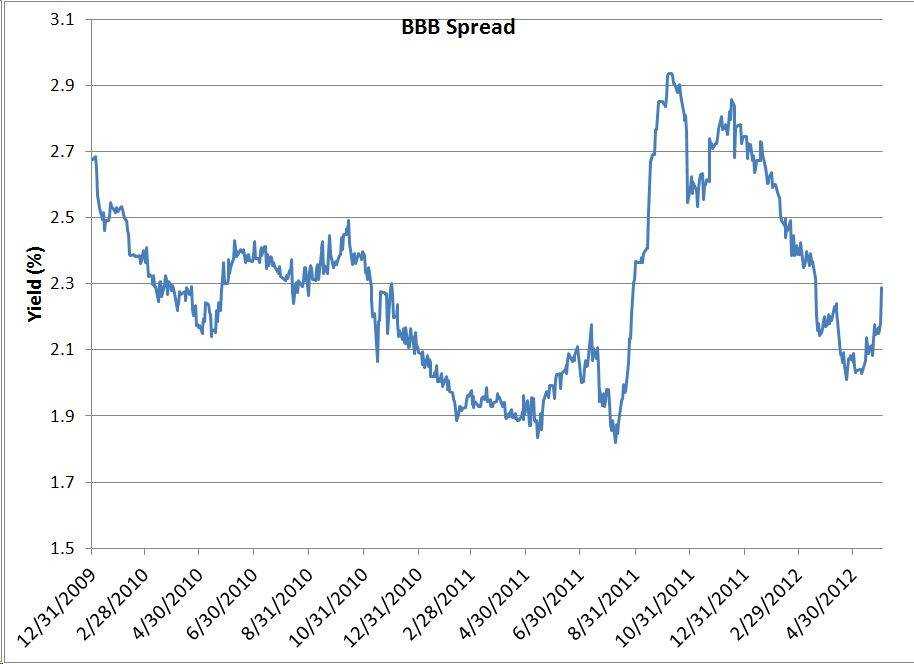 The jump in BBB yields is not dramatic yet, and they’re still far lower than their September to November 2011 highs, but a similar spike in this indicator has presaged broader market sell-offs in each of the past few years. I suspect the stage is being set for a similar result this year.

I see little chance that all of the concerns facing global markets will abate in the near-term. That said, the real outlook for the global economy hasn’t changed as much as perceptions have in recent months. The US economy has continued to grow at a lackluster 2 percent to 3 percent annualized pace.

As seasonal headwinds fade later this summer, I’m looking for the data to firm up just as it did last year. I also wouldn’t be surprised to see the Federal Reserve announce a third round of quantitative easing at some point this summer. While I don’t think the impact on the economy would be that profound, such a move would send investors back into risky assets.

Europe will continue to be a slow-motion train wreck, but I expect leaders there to continue to look for ways to kick the proverbial can down the road. Signs of panic such as negative yields on short-term German government bonds indicate that sentiment on Europe is already so bearish that even a modicum of positive news could firm up markets.

I recommend the following steps for investors: