Gold has been a spectacular investment over the past decade, rising from lows of $278 an ounce in January 2002 to a high of $1,900/oz on September 6, 2011. That multiplied your money 6.8 times in a little less than ten years, for an almost 23 percent annualized compound return. Those are Warren Buffet-like numbers and all you had to do was sit back and hold some of the yellow metal in a safe place. No valuation models were necessary, just some good old-fashioned patience.

The results look even better when you consider two of the three ten-year periods over the past 12 years have seen stocks with negative or very low returns.

Nonetheless, many investors look this marvelous gift horse in the mouth and ask: What have you done for me lately? After all, on May 30, gold was nearly 19 percent off the September 2011 high and at the close Friday, June 15, it was still more than 14 percent down. This is not the worst drawdown over the decade-long run. However, two larger losses were experienced from March 17, 2008 to November 12, 2008 (-29.4 percent) and May 12, 2006 to June 14, 2006 (-21.8 percent). Consequently, the current decline is not necessarily the end of the world for gold.

Of more concern is the comparison that I developed following my June 4 article on Investing Daily, “When to Buy Homebuilder-Related Stocks.” After that article was published, I looked at additional data and found that for the past three years, an investor would have made twice as much money invested in homebuilder stocks than from holding gold (see graph, below). 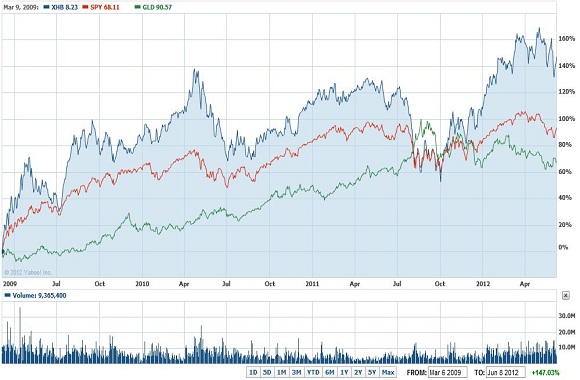 Moreover, for the past 39 months, the S&P 500 returned more than 40 percent more than gold.

SPDR Gold Shares (NYSE: GLD), a gold exchange-traded fund (ETF), was introduced November 18, 2004, so I have selected that date as a good starting point to evaluate how a retail investor could readily use gold in a portfolio. The first comparison is with the SPDR S&P 500 ETF (NYSE: SPY), shown in the following graph: 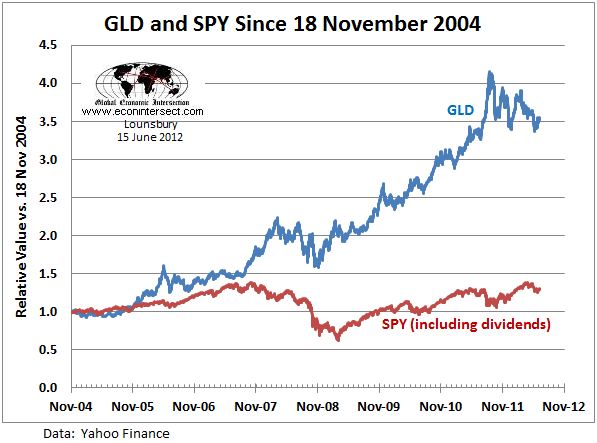 Looking back more than seven years, the advantage of gold over stocks is remarkable. It appears that a big contribution to that advantage is the relatively smaller hit to gold during the Great Financial Crisis of 2007-2009. When we calculate the correlation coefficient for all the daily changes of the two ETFs, the value is near zero (R = 0.059). That is R2 of 0.0035, extremely close to a zero correlation.

Consequently, the two ETFs are totally uncorrelated over the past 7 ½ years. I examined whether I could smooth out some of the volatility evident in the graph above, by constructing a portfolio containing both GLD and SPY. The result with a 50:50 mix is shown in the following graph. (Note: The 50:50 mix is set at day one and never rebalanced. In real life, rebalancing is commonly done every year or so, to keep the portfolio close to the initial ratio.) 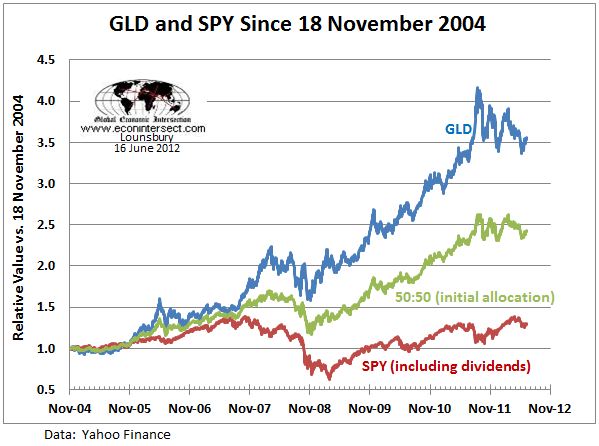 At first glance, we appear to get the results that we might have expected:

Because I am one to look a gift horse in the mouth, I want to know if this horse has teeth. That’s why I ran drawdown measurements on all three of the investments in the graph above and displayed them in the following table:

We can derive three conclusions based on the above table:

The drawdown data for SPY is dominated by the colossal market crash from the October 2007 all-time high. If the largest drawdowns are eliminated from all three data sets, the results are:

The 50:50 portfolio clearly offered a substantial advantage during the market crash of 2007-2009. The benefits of including gold were less in the other time periods examined. Adding gold to a portfolio of stocks still provides a modest improvement during an average drawdown, but does come at the cost of a significantly greater number of drawdowns in excess of 5 percent.