The Summit Surprise: No Sustainable Upside

The fact that investors’ expectations heading into last week’s EU Summit were low should hardly come as a big surprise. After all, EU leaders don’t have an encouraging track record of producing meaningful reforms to permanently solve the region’s continuing credit problems.

Since the crisis began two years ago, EU leaders have convened a total of 19 Summits to address sovereign debt woes and all measures introduced to date have exerted, at best, modest and short-lived effects on markets. We’ve outlined just a few of the most important developments in the following chart of Italian and Spanish 10-year bond yields (see below). 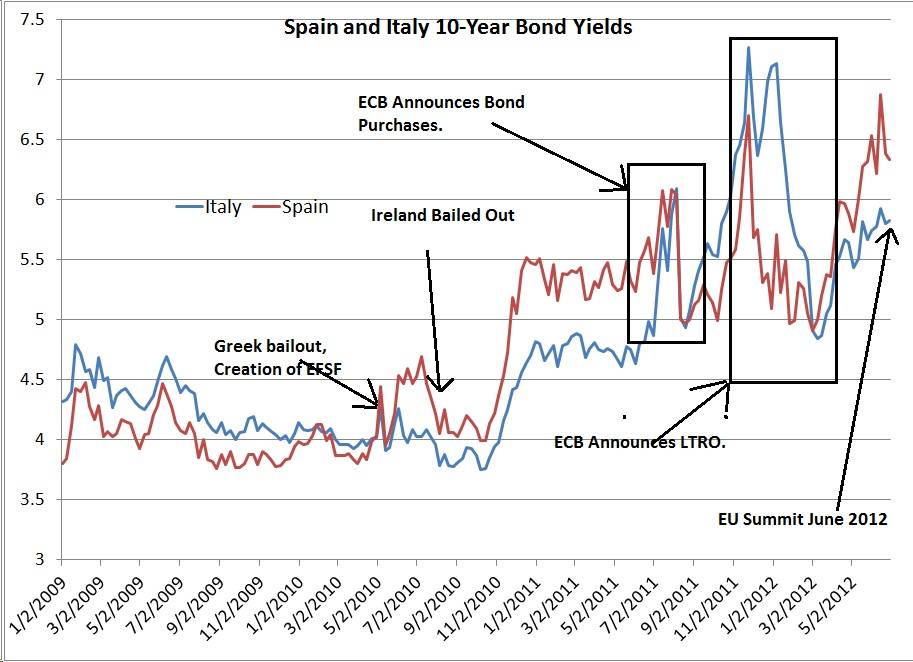 As the chart shows, the EU’s modus operandi appears to be to wait for the market to panic and for yields on fiscally troubled EU debt to spike to unsustainable levels—and then announce partial reforms or a support package to calm market jitters.

For example, in August of last year, the yields on Italian and Spanish government debt spiked well over 6 percent, as it became clear neither country was likely to meet its deficit targets despite announced austerity packages. To combat the crisis, the European Central Bank (ECB) announced it planned to purchase Italian and Spanish government bonds in limited quantities to help push down yields.

For a time, that move worked and yields fell back under 5 percent for both countries. However, by November the market was in panic mode, as it appeared that Greece might hold a referendum on its membership in the euro. Yields for Italy spiked to well over 7 percent.

Once again, the ECB rode to the rescue, announcing the Long-Term Refinancing Operation (LTRO), three-year loans for euro zone financial institutions at ultra-low interest rates. Banks soaked up more of that LTRO money than most analysts expected, a sign that the banks’ liquidity position was a lot shakier than markets had imagined at the time the policy was announced. As fears of a liquidity-driven collapse receded, yields on Spanish and Italian government bonds once again plummeted to below 5 percent by March.

And now, here we go again. Yields spiked again over the past few months, this time led by a surge in borrowing costs for the Spanish government. The main fear this time is that Spanish banks are sitting on billions in bad loans made to homeowners and developers during that nation’s property bubble years. To make matters worse, Spain’s economy is in a severe recession with unemployment around 25 percent, making it even more difficult for borrowers to repay. Spain’s banks are estimated to need between 60 billion and 100 billion euros (USD125 billion) in additional capital.

However, on Friday June 28, the EU announced yet another series of policies to address the credit crisis. Apparently, Germany caved on some of its prior demands under tremendous political pressure from France, Italy and Spain.

Here are the three main policies announced at the Summit:

1. Europe plans to set up a new banking regulator under the auspices of the ECB. Once this new regulator is in place, the European Stability Mechanism (ESM)—the region’s 800 billion euro (USD1 trillion) permanent bailout fund—will be able to recapitalize banks directly. Prior to this agreement, the ESM and its temporary predecessor the European Financial Stability Fund (EFSF) were set up to lend to countries that could, in turn, lend to banks.

This new policy is particularly good news for Spain, because it will allow the nation to accept the funds received from Europe to bail out the nation’s banks, but keep the entire USD125 billion off its sovereign balance sheet. The cost of bailing out Spain’s banks could have added 10 percent or more to the Spanish government’s debt-to-gross national product (GDP) ratio, further limiting the nation’s ability to borrow money.

2. Bonds purchased and loans made to support Spain will not gain seniority status. Prior to this agreement, funds lent to Spain by the EU would rank above loans or bonds bought by private investors in the event Spain were to default on its obligations. By removing this seniority status, Spanish bonds become more attractive to private investors. The idea is to encourage private investors to buy Spanish government debt, making the country less reliant on bailouts going forward.

3. The ESM and EFSF can purchase bonds issued by governments such as Italy and Spain on the secondary market. Previously, the bailout funds were set up to lend money directly to governments in exchange for strict austerity measures aimed at reducing deficits and forcing reform.

By purchasing bonds in the secondary markets, the ESM and EFSF can directly influence market interest rates on Spanish and Italian government debt and help push down yields. Countries must agree to additional monitoring in exchange for this support, but do not have to sign up for additional austerity measures.

Market expectations heading into the EU Summit were low and Germany has made significant compromises as part of this deal. Predictably, the initial market reaction was positive, with yields on Spanish and Italian sovereign debt falling sharply while stocks in Europe and the US soared.

While a skeptic could argue the merits of a policy aimed at bailing out fiscally weak countries, the outlook for Europe has improved significantly since mid-June. First, the election of a pro-bailout coalition government in Greece dramatically reduced the odds that the nation will be forced to exit the single currency in a disorderly fashion.

The region’s moves at the Summit should serve to lower borrowing costs for Spain and Italy over the near-term; the spike in Italian and Spanish yields above the 7 percent level has been one of the biggest headwinds facing global markets in recent months. These moves also dramatically reduce the odds that Europe’s troubles will escalate into a global credit contagion similar to that witnessed in 2008.

However, plenty of unanswered questions remain. For one thing, the ESM is an 800 billion euro fund but that headline figure is a bit misleading because it includes the 300 billion euros the EFSF has already lent to countries requesting bailouts. There is really only 500 billion euros in new money and not all of this capital is immediately available for withdrawal. That might not be enough capital to support the USD1.4 trillion Spanish economy, much less the USD2.1 trillion Italian economy if credit market pressures continue.

Moreover, the Netherlands and Finland have both announced that they plan to block an expansion of the ESM that would allow the purchase of bonds on the secondary market. Perhaps the two nations can be persuaded to change their minds; if not, this would eliminate one of the most positive parts of the Summit agreement. At the very least, this suggests that European leaders remain deeply divided as to how to address the crisis.

In addition, the deal stopped short of even greater fiscal union such as the creation of common EU debt known as euro bonds or a central deposit guarantee system for EU banks. The deal also doesn’t change the fact that Europe’s economy is in recession and some of the largest countries in the region including Italy face a significant drag on growth from fiscal austerity measures—tax hikes and spending cuts—adopted in recent years to reduce deficits.

Investors should also remember that Europe is only one headwind facing the market. On Monday, the Institute for Supply Management (ISM) released one of the indicators we watch most closely in gauging the strength of the economy: the US Purchasing Manager’s Index (PMI) for Manufacturing.

The PMI plummeted from 53.5 in May to 49.7 in June; levels under 50 indicate contraction in the Manufacturing segment of the US economy. This is the first negative PMI reading over the past two years and was well below consensus expectations for a decline to just 52.

Even worse, a look inside the report yields an even more dismal picture. The new orders index plummeted from a red-hot 60.1 to 47.8. New orders are important because they’re a good gauge of future manufacturing demand. PMI can be a volatile indicator and we’d typically need to see readings below the 46 to 47 range before getting worried about an imminent recession. Nonetheless, this latest reading is disturbing news and suggests the US is clearly still mired in a summertime soft patch.

While a summer rally is possible over the next two weeks as the market digests the news from Europe, we’re suspicious of the sustainability of any upside for the broader markets. We’re still looking for the S&P 500 to re-test the 1,200 to 1,225 region over the next two months before finding a durable bottom.