I’ve been expecting the Federal Reserve to announce a third round of quantitative easing (QE3) at some point in 2012, given the continuing deterioration in economic data. Most economists and market participants were looking for the Fed to at least strongly hint at additional stimulus measures at its September 12-13 policy meeting.

However, the central bank managed to surprise the market with a bolder-than-expected plan that’s being dubbed QE Infinity. This latest round of quantitative easing will involve the purchase of roughly $40 billion in agency mortgage-backed securities (MBS) per month.

The Committee will closely monitor incoming information on economic and financial developments in coming months.If the outlook for the labor market does not improve substantially, the Committee will continue its purchases of agency mortgage-backed securities, undertake additional asset purchases, and employ its other policy tools as appropriate until such improvement is achieved in a context of price stability. In determining the size, pace, and composition of its asset purchases, the Committee will, as always, take appropriate account of the likely efficacy and costs of such purchases.

In other words, the Federal Reserve will continue buying MBS until the labor market improves. The central bank is also leaving the door wide open to purchases of other assets such as additional government bonds in an effort to drive down interest rates. Theoretically, there is no limit to the amount of bonds the Fed could buy or to the duration of QE. The Fed also changed its language to indicate that it anticipates keeping rates at exceptionally low levels through at least mid-2015.

The statement went on to note that current expectations are for inflation to remain under the central bank’s 2 percent objective over the medium term. At least over the short-term, the Fed’s statement appears to have been enough to push up investors’ inflation expectations significantly (see chart, below). 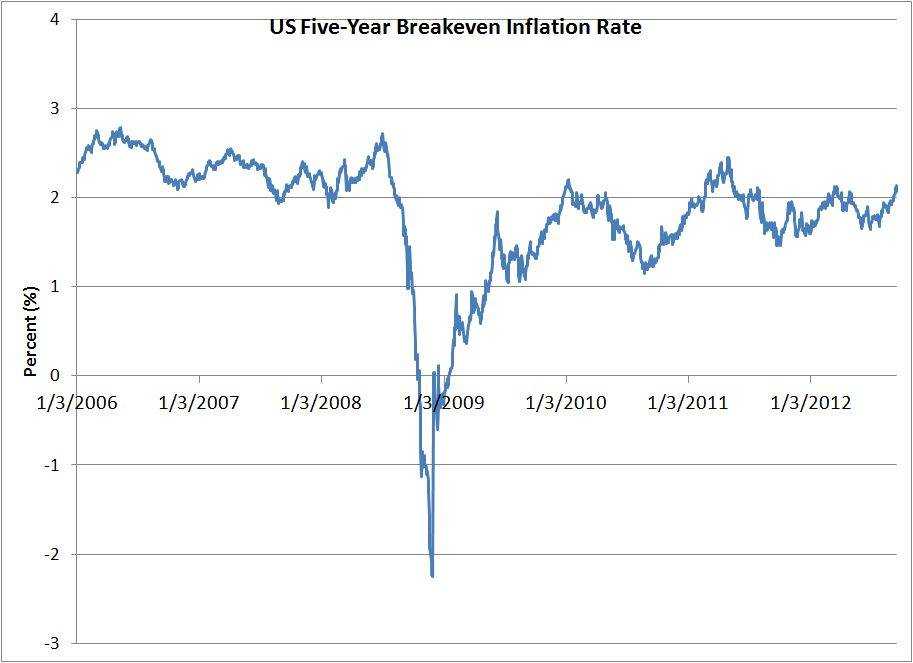 This chart shows the difference in yield between a standard Five-Year US Treasury bond and the yield on a Five-Year Treasury Inflation-Protected Security (TIPS) bond. The rates on an inflation-protected security are adjusted based on the consumer price index (CPI) rate of inflation. Consequently, the difference between the yield on a five-year bond and that of an inflation-protected bond gives a rough estimate of the market’s expectations for inflation rates over the coming five years.

The current five-year breakeven inflation rate is roughly 2.15 percent, up from a low of about 1.72 percent in late June and at the highest level since May of 2011.

As noted in last week’s issue, the European Central Bank (ECB) announced its own version of QE Infinity, saying it would buy sovereign bonds of fiscally troubled EU nations in unlimited quantities as needed to keep borrowing costs from spiraling out of control. While the ECB is sterilizing these purchases, meaning that they will not have an impact on the region’s overall money supply, the central bank’s Outright Monetary Transactions (OMT) are also broadly seen as inflationary.

In both cases, it doesn’t really matter how many bonds the ECB or the Fed actually buys. What’s important is that both banks have announced an open-ended policy for achieving a particular objective. It’s tough for investors to justify fighting the ECB and Fed both of which have a theoretically unlimited balance sheet. Just the announcement of these policies has been enough to talk down the yields on Italian and Spanish government bonds and to push up inflation expectations in the US.

Global equity markets have cheered this latest round of quantitative easing, with the S&P 500 breaking out to its highest levels since early 2008. This rally has occurred despite lackluster US economic data and a European economy mired in recession. For example, the four-week average of initial jobless claims rose again this week to 375,000, suggesting that the jobs market continues to be sluggish in September. It’s unclear if this latest round of easing will actually be enough to stimulate growth in the US and EU; most economists agree that each additional round of quantitative easing has been less effective than the prior round.

However, the fact that the Fed is determined to push up inflation expectations means that the stock market can continue to levitate even if the economy continues its 1.5 percent to 2 percent sluggish pace of growth.

Rising inflation expectations are particularly bullish for commodity prices. Energy stocks should continue to perform well, with West Texas Intermediate (WTI) already approaching the psychologically important $100/bbl level while Brent crude oil has broken over $115/bbl. The latest round of monetary easing has even pushed US natural gas prices back over $3/MMBTU, despite a severe glut of gas in storage.

Another group that continues to look strong is precious metals and related mining stocks. Gold has soared over $1,750 per ounce, up from lows around $1,500 earlier this year. While the yellow metal looks extended on the charts and could be vulnerable to a short-term pullback, any downside in gold is a buying opportunity and I am looking for gold to top $2,000 per ounce by early 2013.

Rising inflation expectations is also pushing up gold and silver mining stocks with the widely watched Philadelphia Gold & Silver Index breaking out to its highest levels in nearly a year in response to rising expectations for Fed and ECB monetary stimulus.

In addition to energy and precious metals, I continue to recommend a defensive posture in the stock market. While the latest round of monetary easing is bullish for stocks across-the-board, even under the most optimistic scenario it will take months for economic growth to respond to the stimulus. I expect economic data to remain weak, continuing to pressure economically sensitive groups such as industrials, which have significantly lagged the S&P 500 so far in 2012.

Investors should focus on less volatile large-capitalization stocks, names that pay dividends and on more defensive S&P 500 sectors such as consumer staples and health care. Staying defensive will allow you to play the market’s upside without exposure to volatile market swings. That’s a smart way to protect your portfolio, as we approach the 2012 presidential elections and 2013 “fiscal cliff” of scheduled tax increases and spending cuts.