In the wake of dramatic and open-ended monetary easing from both the US Federal Reserve and the European Central Bank (ECB), global markets are clearly growing more concerned about inflation. In particular, some have begun speaking of a policy accident in which the Fed overdoes the stimulus, pushing inflation well above its 2 percent target comfort zone in coming years.

One of the most important indicators to watch in coming weeks is the five-year breakeven inflation rate, which I’ve covered in previous issues of this publication. The chart below shows the difference in yield between a standard Five-Year US Treasury bond and the yield on a Five-Year Treasury Inflation-Protected Security (TIPS) bond. 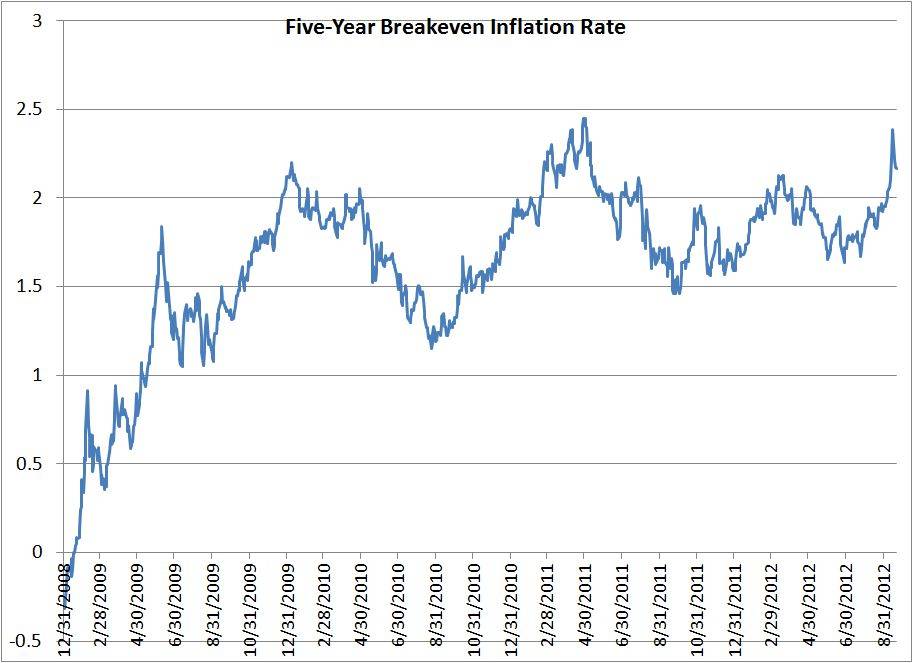 As this chart shows, the five-year breakeven inflation rate in the US recently spiked to a high just under 2.4 percent, up from about 1.65 percent just two months ago. This is the highest reading on breakeven inflation since April 2011 and suggests that the market believes the Fed will be successful in pushing up inflation with its third round of quantitative easing (QE3), dubbed “QE Infinity” because the central bank has vowed to purchase $40 billion in mortgage-backed securities (MBS) per month until there’s a significant improvement in the labor market.

Two other signs that the market is looking for an uptick in inflation are the decline in the value of the US dollar and the sell-off in bond prices (rising yields). The US dollar index—a trade-weighted index of the US dollar against other major currencies—has quickly collapsed from two-year highs in July to new 52-week lows by September (see chart, below). 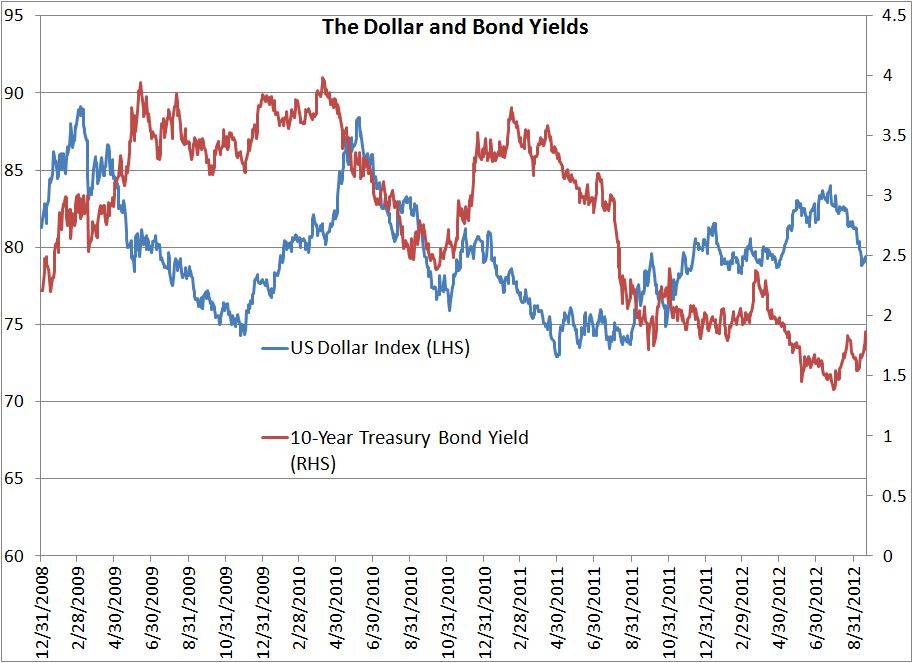 The dollar tends to sell off when the market expects inflation to rise or the US to monetize its debts by printing. Meanwhile, fixed income investments—government, municipal and corporate bonds—tend to get hit when inflation picks up. Rising inflation pushes down the real yield on fixed income products.

For example, with the current yield on the US Treasury bond at less than 2 percent, a spike in US inflation to well above the Fed’s current 2 percent target would push the real inflation-adjusted yield on US Treasuries well into negative territory.

To compensate for rising inflation, investors demand higher yields on fixed income products—when a bond’s yield rises, the price of the bond falls.

The spike in the US 10-Year yield—a decline in the price of these bonds—might seem counterintuitive when you consider that the Fed has been easing monetary policy by buying bonds. However, the market is demanding a higher nominal yield because it’s betting that QE Infinity will push up inflation.

The ECB’s pledge to buy up bonds of fiscally troubled EU nations in unlimited quantities to push down yields is also having its desired effect. Italy and Spain—the two countries at the center of the recent crisis—aren’t eligible for support from the ECB because neither country has yet applied for a bailout from the EU. The yield on the 10-year Italian government bond has tumbled from well over 7 percent in late 2011 to below 5 percent more recently (see chart, below). 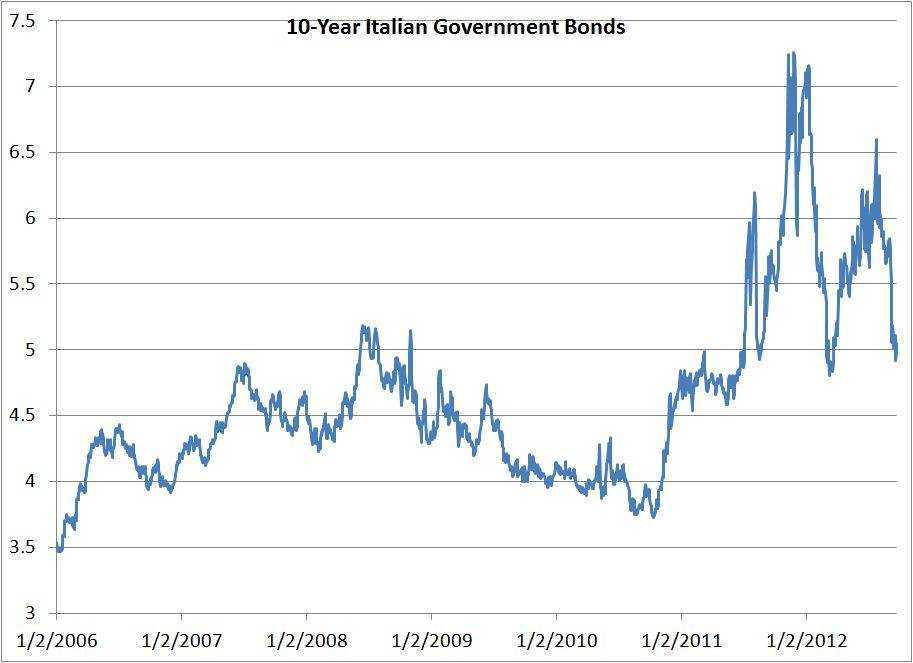 Ironically, the decline in European sovereign yields takes pressure off the Italian and Spanish governments to apply for support from the EU. With borrowing costs down so sharply, there’s also less immediate pressure to push ahead with fiscal reforms.

The risk is that fiscal reforms stall in both countries under popular protest, prompting another spike in yields as the market essentially forces these countries to apply for a bailout and receive support from the ECB’s bond-buying program. Regardless, the recent decline in borrowing costs is a positive for the EU economy, but it’s not a true solution to the underlying debt problems faced by Madrid and Rome.

Rising inflation expectations are pushing up stocks and commodity prices independent of global economic conditions. With the possible exception of US housing data, most of the economic news released over the past few weeks has been negative. I’ve written extensively about initial jobless claims data in this publication over the past few months, because it’s one of the best leading indicators of US economic health. It’s worth repeating that the labor market continues to deteriorate (see chart, below). 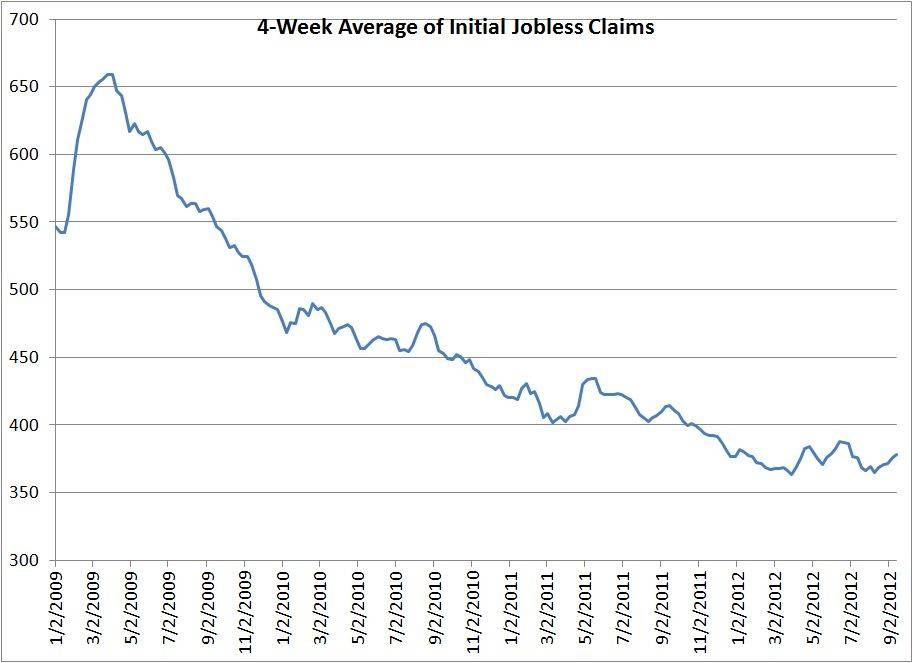 The four-week moving average of initial jobless claims is a better measure than the raw data, because it smoothes out some of the week-to-week volatility. On this basis, jobless claims bottomed out in March and are approaching their 2012 highs, raising the risk that we could continue to see a few more months of lackluster employment reports from the Bureau of Labor Statistics.

Meanwhile, the Empire Manufacturing Survey of General Business Conditions, a survey of manufacturers in New York State, fell to -10.41 in September, its lowest level since early 2009 when the US was still in the midst of the Great Recession (see chart, below). While regional manufacturing surveys can be volatile, this doesn’t bode well for the next national Purchasing Manager’s Index (PMI) release early in October. Additional monetary easing may be pushing up stocks and inflation expectations, but it’s not yet having much of an impact on the labor market or manufacturing sentiment. 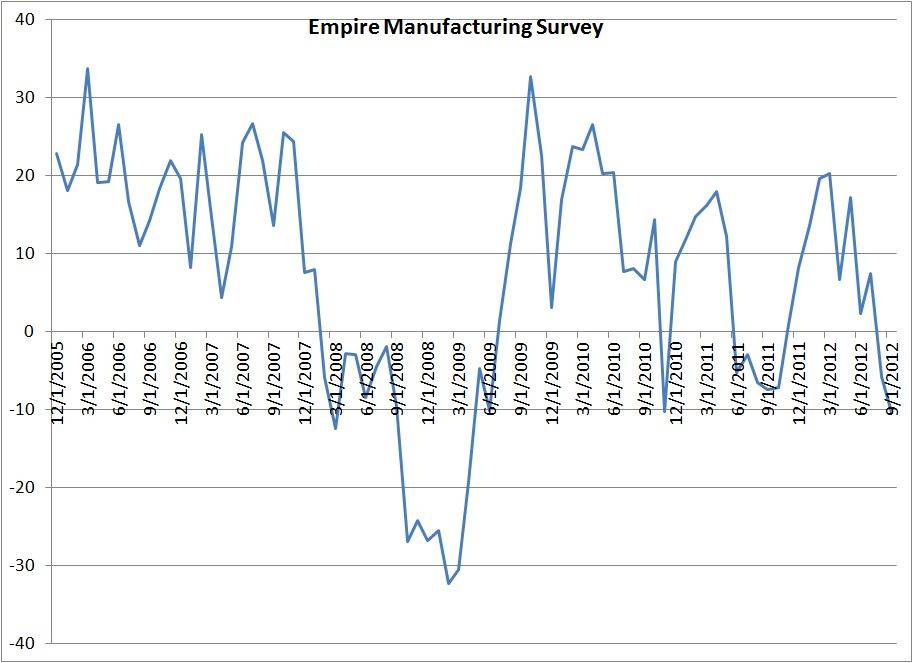 There’s an old saw on Wall Street that investors should never fight the Fed and that’s holding true these days, as investors shake off negative economic news and buy on expectations of more quantitative easing. Certainly, the rally could continue for at least a few more weeks; the S&P 500 has broken higher through key technical resistance at around 1,425.

However, there are many opposing forces at work that will likely come into focus before the November elections, including the looming fiscal cliff of tax hikes and spending cuts as well as a steady drumbeat of negative economic data. This raises the odds the market will see a significant pullback this autumn.

To play the current market environment, I continue to recommend staying defensive with large capitalization stocks and groups such as consumer staples that do not need a strong economy to post solid earnings results. In addition, the biggest beneficiary of rising inflation expectations is commodities including gold, gold mining stocks and the energy complex.

With interest rates ultra-low and inflation expectations on the rise, investors should largely steer clear of investment grade bonds. A better play for income-oriented investors is to look for stocks that have the potential to raise their dividends significantly; rising dividends provide an offset to rising inflation.

One of my favorite groups remains the Master Limited Partnerships (MLPs) that offer average yields of about 5.75 percent, with some yielding over 10 percent. MLPs also have a long history of growing their payouts and some have exposure to commodity prices, a hedge against inflation.