This past week the US Environmental Protection Agency (EPA) denied a waiver request of the federal Renewable Fuel Standard (RFS) that would have temporarily reduced required national ethanol production levels going forward.

A coalition of livestock, poultry and dairy organizations, nine governors, and a bipartisan group of 34 US senators and 156 House members made the request in the wake of the Midwestern summer drought, which reduced the corn crop and drove corn prices to record highs. Since about 40 percent of the nation’s corn crop is used to produce ethanol, the idea behind the waiver was that this would make additional corn supplies available and bring corn prices back down — but at the expense of ethanol producers, who would lose some of their mandated market.

In denying the request, the EPA wrote, “The agency has not found evidence to support a finding of severe ‘economic harm’ that would warrant granting a waiver of the Renewable Fuels Standard.”

Ethanol producers were happy, with Jeff Lautt, the CEO of POET — the nation’s largest ethanol producer — stating “The EPA today made a sound decision in denying a waiver of the Renewable Fuel Standard. As studies have shown, a waiver would have likely had little to no impact on commodities prices in the aftermath of the recent drought. This effort was nothing more than the latest attempt by renewable fuel opponents to undermine policy that has helped make America stronger.”

Groups requesting the waiver expressed disappointment. A coalition of dairy and meat producers released a joint statement that read in part: “We are extremely frustrated and discouraged that EPA chose to ignore the clear economic argument from tens of thousands of family farmers and livestock and poultry producers that the food-to-fuel policy is causing and will cause severe harm to regions in which those farmers and producers operate.”

The EPA made exactly the decision I had predicted back in the summer, when I noted that “ethanol producers will lobby very hard to keep that precedent from being set.”

If you understand ethanol politics in the US, then this decision isn’t surprising. The EPA has consistently sided with the ethanol industry, having denied a similar waiver request in 2008 from the state of Texas. Further, in 2011 the EPA allowed a waiver on behalf of the ethanol industry to allow 15 percent ethanol blends in cars that were not designed for them.

Given the clear strong support of the US government for the ethanol industry, are there threats and opportunities that arise as a result? One might think so, given the history of the ethanol industry in the US, and in particular the explosive growth since 2005.

History of the US Ethanol Industry

Efforts to commercially introduce homegrown ethanol into the fuel supply began when the US government introduced tax credits for ethanol usage with the Energy Tax Act of 1978. The tax credit was an exemption to the Federal Excise Tax on gasoline, equal to $0.40 for every gallon of ethanol blended into gasoline at the 10 percent level. This tax credit was increased to $0.60 per gallon in 1984, decreased in stages to $0.45 per gallon by 2009, and finally phased out completely at the end of 2011. From 2004 until the 2011 phase-out the tax credit was called the Volumetric Ethanol Excise Tax Credit (VEETC).

In addition to the tax credit, the US government made government-backed loans available to ethanol producers for plant construction and implemented an import fee to help protect domestic ethanol producers from cheaper ethanol imports. Despite these measures, the majority of the ethanol plants that were built in the early 1980s were bankrupt by the mid-1980s.

Ethanol simply could not compete head-to-head with gasoline on price. Despite all of the financial incentives for ethanol, the average annual price of a gallon of ethanol had exceeded the price of a gallon of gasoline in every single year on record through 2005. Not only was ethanol more expensive on a per-gallon basis, but since ethanol has two-thirds the energy content of gasoline, consumers were also sacrificing fuel economy when using ethanol blends.

The US government gave the industry a huge boost by mandating ethanol usage in the Energy Policy Act of 2005. One of the key provisions of the new energy policy was the Renewable Fuel Standard (RFS). The RFS started with a mandate that 4 billion gallons of ethanol had to be added to the fuel supply in 2006—just about the amount that was being produced at that time—and initially increased each year to 7.5 billion gallons of ethanol by 2012.

The ethanol mandate and phase-out of methyl tertiary-butyl ether (MTBE) as an oxygenate in the gasoline supply quickly achieved what nearly 30 years of subsidies did not: explosive growth in ethanol consumption, and a gallon of ethanol finally dropped below the price of a gallon of unleaded gasoline. An ethanol gold rush ensued, capacity was overbuilt, and suddenly the industry found itself in financial trouble as ethanol supply exceeded the mandates. 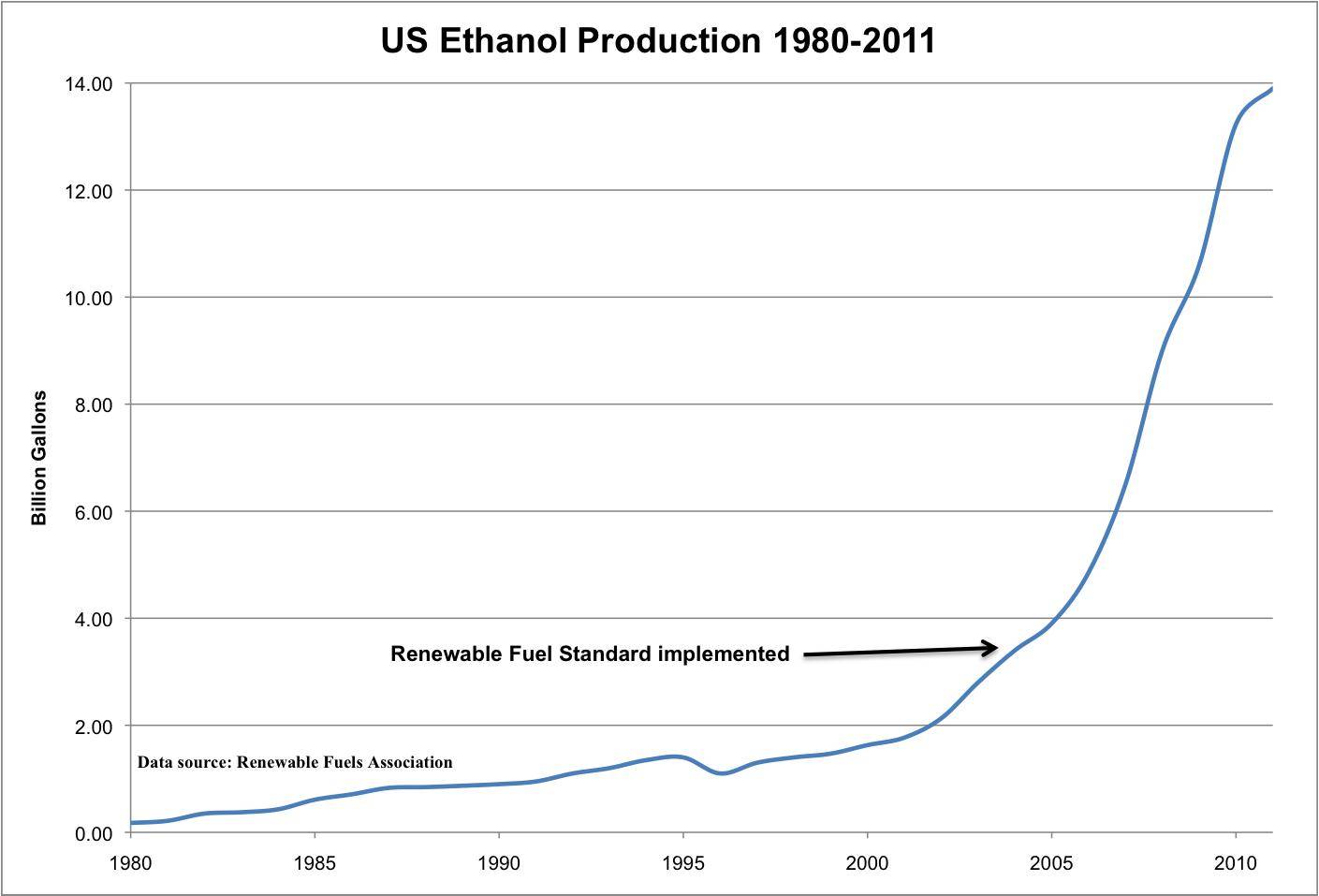 One of the controversial aspects of the Renewable Fuel Standard was that Congress did not eliminate the VEETC when it put the mandate in place. The gasoline blender—typically an oil company—collected the credit as an incentive to purchase ethanol, but when the mandate was enacted, the blender was compelled by law to blend specific amounts of ethanol. Thus, gasoline blenders were being paid to comply with the law, a situation akin to paying someone to obey traffic laws.

In addition to the tax credit and mandate, domestic production was protected from ethanol imports by a tariff of 2.5 percent tax plus $0.54/gallon. Thus, the US ethanol industry was built upon tax credits, mandates and a protective tariff, and usage of ethanol continues to be mandated by the RFS.

One might suspect that many investment opportunities arose as consumption of ethanol accelerated. To the contrary, ethanol companies like Pacific Ethanol (NSDQ: PEIX), Verasun Energy and Aventine Renewable Energy Holdings watched as their share prices plummeted; many of these companies were forced into bankruptcy.

Valero Energy (NYSE: VLO) purchased bankrupt Verasun’s ethanol plants at a bankruptcy auction for 30 percent of replacement value. Since Valero was being forced to blend ethanol, it made more sense to them to just make it themselves.

How could this happen, when the market was growing so rapidly?

First, the fact that ethanol has to be mandated to gain market share is a strong indicator that the economics don’t look good relative to gasoline.

Second, producing ethanol isn’t rocket science. The barriers for entry into the marketplace are low, meaning competitors sprang up everywhere. In some cases complete amateurs got into the ethanol business. This doesn’t happen in the case of oil refineries, because the capital costs and technical challenges pose a very high barrier that Bob the Dentist and his buddies aren’t going to overcome by pooling their money and channeling their passions.

Today, we are again in a situation in which ethanol capacity is overbuilt. Because of the escalating mandate, ethanol producers are anxious to get ahead of the mandate so they are in a position to immediately sell the additional mandated volumes that each new year brings. But too many companies are trying to do this, and the result is that the ethanol industry remains totally dependent on the US government to continue mandating that we use ethanol in the fuel supply.

What the ethanol industry would really like is for the current 10 percent mandate to be increased to 15 percent, because it would increase their market by 50 percent. The EPA took some steps in that direction when they granted the waiver to allow 15 percent ethanol blends in newer model cars. Auto makers were just one of the groups who didn’t like this waiver for fear that they would be held liable for any damage caused by the introduction of E15.

But short of a new mandate, I expect E15 will get little traction in the marketplace. It will be a logistical nightmare to only allow E15 in certain vehicles, and retailers are not going to take the liability risk of someone putting E15 in the wrong vehicle.

The largest potential market out there for the industry—much greater than current domestic ethanol production—is the E85 market. But adoption of E85 has grown very slowly because ethanol prices are not usually competitive with gasoline prices. That is a situation that could be rectified with some modifications to the tax code (which could be done without a net tax increase).

The ethanol industry as a whole will continue to exist, as long as the government keeps the RFS in place. If the RFS is ever abolished, my prediction is that the entire ethanol industry would collapse. Despite having concerns about mandates, I do not want to see the Midwest devastated by collapse of the ethanol industry. Ultimately the industry must become more competitive.

The inherent instability of this government-supported market makes most direct ethanol plays unsuitable for equity investors. We will continue to prefer stocks of companies benefiting from sustainable trends driven not by government policy but by real-world supply-and-demand dynamics.