Over the last two years, the Keystone has become the most famous pipeline in North America.

For backers, it’s the key to the development of Canadian oil sands, the economic glue for a historic alliance and a likely source of thousands of jobs.

Opponents claim it could become a “fuse to the biggest carbon bomb on the planet,” hastening global warming and polluting groundwater.

For the Obama Administration, the Keystone has been a hot potato. With the election safely past, expect its proposed expansion to win approval in the next few months over howls of ill-informed protest.

The Keystone Pipeline is owned by TransCanada (TSX, NYSE: TRP). It already moves oil from the Athabasca oil sands region in Alberta, Canada, to hubs and refineries in the U.S. The pipeline system spans 2,150 miles and currently has the capacity to deliver up to 590,000 barrels per day (bpd) of crude oil. 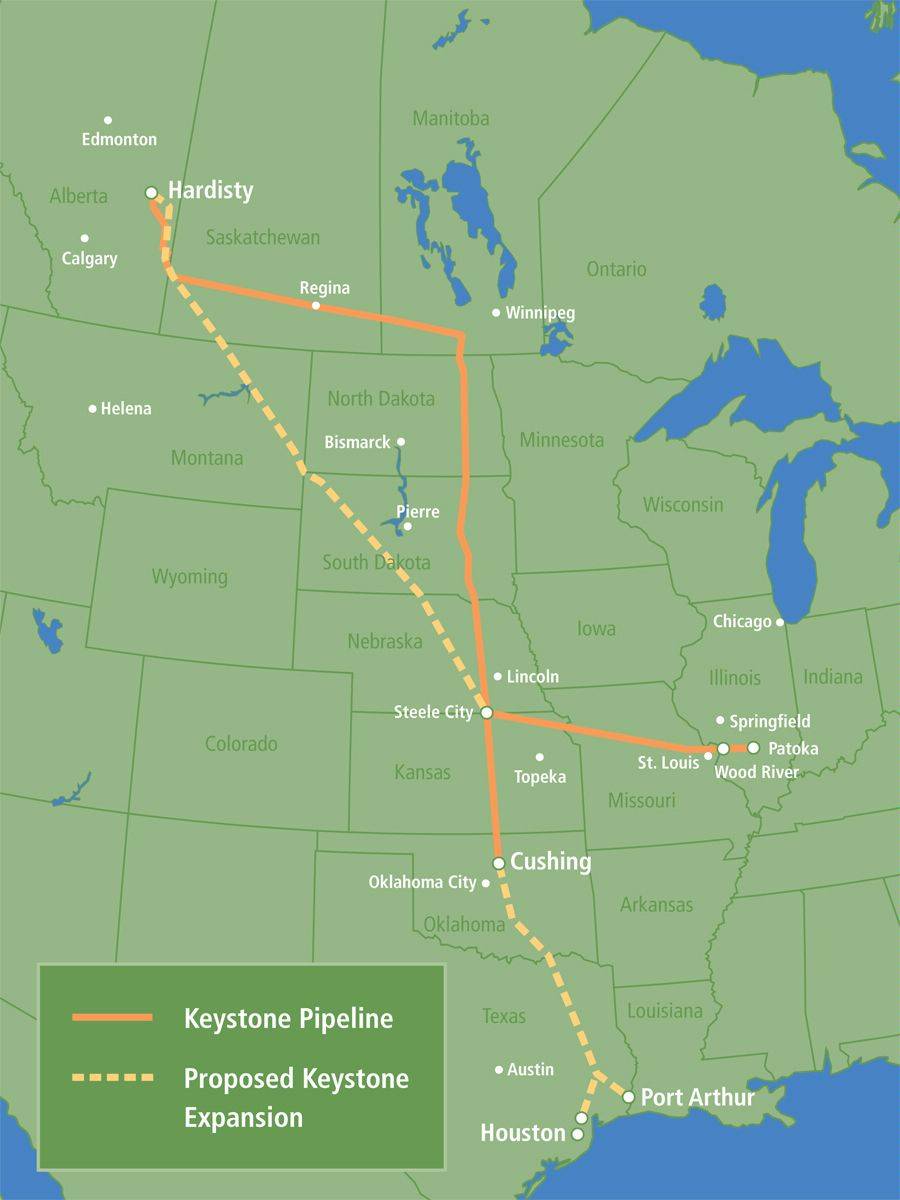 The first phase of the pipeline began operating in 2010, and moved oil from Alberta to Illinois. In 2011, the second phase of Keystone connected Steele City, Nebraska to the major oil hub in Cushing, Oklahoma. The oil flowing into Cushing contributed to a crude bottleneck there and helped push West Texas Intermediate (WTI) crude oil to a substantial discount from Brent crude.

There are two proposed expansions of the Keystone Pipeline that are collectively called Keystone XL (“XL” stands for export limited.) The southern leg of the pipeline is under construction and scheduled to come online this year. This Keystone-Cushing extension will have an initial capacity to transport 700,000 barrels of oil per day from the Cushing hub to Gulf Coast refineries. This was the project that President Obama endorsed on the campaign trail in 2012, promising to “cut through the red tape” to expedite it.

This was, however, political posturing because the southern leg does not require federal approval. The northern leg is a different story. This proposed 1,180-mile addition would extend from Hardisty, Alberta to Steele City, Nebraska, carrying up to 830,000 bpd of crude from the oil sands in Alberta and the Bakken oil fields in North Dakota.

Because the proposed pipeline would cross the U.S. border, the State Department must determine that the project is in the national interest in order to grant a permit.

In 2011 all indications were that the permit was forthcoming. The State Dept. issued a final Environmental Impact Statement (EIS) in late August 2011 that concluded the project would have “limited adverse environmental impacts.” The EIS further stated that the pipeline would carry crude oil that is “similar in composition and quality to the crude oils currently transported in pipelines in the U.S.”

The EIS was widely seen as a thumbs-up for the project, and this galvanized the opposition of environmentalists. Within days, protesters were picketing the White House. Actresses Daryl Hannah and Margot Kidder were arrested alongside NASA climate scientist James Hansen.

Bowing to the pressure, the Obama Administration delayed the decision on the project. In January 2012, Congress passed a Republican provision requiring the administration to make a decision. The State Dept. then rejected Keystone’s application, claiming it was not given enough time to study the project.

In May TransCanada submitted a new application to the State Dept., rerouting the pipeline away from Nebraska’s environmentally sensitive Sandhills region, which sits atop the Ogallala Aquifer. The State Dept. promised a decision in the first quarter of 2013 — conveniently after the presidential election.

Although environmentalists have tried to attack the pipeline from various angles, this really boils down to an attempt to slow down the development of the oil sands and force the U.S. to turn to other, preferably renewable, energy sources.

But a top expert on the Ogallala Aquifer, University of Nebraska professor emeritus James Goecke, has written that “any leakage would be very localized” given the structure of the aquifer.

Note that cities, factories and farms already sit on top of the aquifer. If it were that easy to contaminate, it would be contaminated all the time because farmers put tons of herbicides, pesticides, and fertilizers on the ground above the Ogallala every year.

Many Keystone opponents seem to think a pipeline crossing an aquifer would be unprecedented. They seem totally unaware of just how many pipelines currently criss-cross the U.S., and even the Ogallala Aquifer. Here is a map showing only the major pipelines in the U.S. pipeline system:

TransCanada ultimately responded to the objections by proposing a new pipeline route away from the Sandhills region. This did not appease environmentalists, who continued to insist that the Ogallala could be contaminated. But they did start to diversify their arguments.

Some began to argue that since the U.S. became a net exporter of refined products in 2011, that the crude would ultimately be shipped to the Gulf Coast, refined, and then exported. So what?

Consider the situation. Gasoline demand in the U.S. has fallen for several years. Refiners can respond by shutting down more refineries and laying off workers — as has taken place on the East Coast, which has limited access to Canadian and Bakken crudes — or they can seek other markets for their product.

Note that over 50% of the exported gasoline is going to Mexico and a significant proportion of the rest is shipped to Canada, Ecuador, Colombia and Brazil — countries that sell crude oil to the U.S. So we are importing crude and exporting back the higher-value refined fuels, creating jobs and tax revenue. That’s a favorable trade and a good deal.

Opponents may be right that the Keystone extension will likely raise fuel prices in the Midwest. After all, TransCanada is building the pipeline to alleviate a bottleneck of crude oil that currently benefits that region. But prices elsewhere, including the U.S. East Coast, would likely tick down a notch as a result.

But what about the real source of the objections — that the pipeline would help accelerate climate change? NASA scientist and climate change expert James Hansen declared that if the oil sands are tapped, “it is essentially game over” for the planet. Keystone opponents have called for a review of the climate change implications of building the pipeline.

They are not likely to appreciate the answer. A paper published in February 2012 in Nature Climate Change calculated that using the 170 billion barrels of proved reserves from the Alberta oil sands would produce just 0.02 to 0.05 centigrade degrees of global warming. One fiftieth to one twentieth of a degree does not support the hyperbolic statements.

Speed of development is another point that opponents haven’t considered. Canada’s oil production in 2011 was 1.3 billion barrels, or 3.56 million barrels per day. Over the past decade, that output has grown less than  3% annually (but still above the global average growth rate.) If we assume that the recent growth rate can continue until Canada reaches 10 million barrels per day, at that point its oil production would be on par with that of Saudi Arabia and Russia. Under that scenario, how long would it take for Canada to produce 170 billion barrels of oil and contribute the 0.02 to 0.05 C of warming? Until the year 2075!

So given the very low contribution to the overall climate change equation — plus the length of time it would take to extract and burn through that 170 billion barrel reserve — the focus on this issue is a tremendous waste of time and effort.

By far the dominant contributor to greenhouse gas emissions is rising coal consumption in developing countries. The contribution of oil sands is simply noise in the overall data given the magnitude of the contribution from coal. Pipeline opponents should instead be trying to figure out a way for the developing world to industrialize without consuming ever greater quantities of coal.

Approval in the Cards

I predict that the Keystone XL pipeline will be approved. The Obama Administration was leaning that way prior to the environmental uprising, and with the election out of the way is likely to follow through rather than alienate a key ally.

If the pipeline isn’t approved, the Canadians will redouble their efforts to build a pipeline to their West Coast so they can get this oil to markets in China. That would leave the U.S. dependent on Venezuelan crude. So if the pipeline is blocked the Canadian crude that could have been efficiently transported will end up making a much longer — and more carbon intensive — trip to China, while Venezuelan oil continues to make a long and carbon intensive trip to the U.S.

The stakes are high for TransCanada, which projects that Keystone XL will add $1 billion in earnings before interest, taxes, depreciation and amortization (EBITDA) when it begins to operate. Oil producers in the Canadian oil sands and the Bakken shale formation in the U.S. would also benefit.

Their gains would come at the expense of railroads that are transporting increasing volumes of crude oil from both the oil sands and the Bakken in the pipeline’s absence. The oil is still getting to market, but less efficiently than it would via pipeline. Approving Keystone XL would aid the economy without jeopardizing the environment.