Considered by posterity as the quintessential “oil baron,” John D. Rockefeller had amassed a fortune in today’s dollars of nearly $210 billion when he died in 1937. He holds the record as the richest American ever and certainly one of recorded history’s richest persons this side of Croesus.

For generations, the Rockefeller surname has been synonymous with vast wealth. How did he reach the pinnacle of capitalist success? By accumulating undervalued energy investments that exponentially appreciated in price as they went on to dominate their markets.

Despite the continual search for alternative fuels, we still live in the Hydrocarbon Era and oil remains the lifeblood of modern industrial society. It’s the prize coveted by nations and businesses, ever since Rockefeller and his Standard Oil Company mastered the art of exploiting black gold at the turn of the last century.

Global oil demand is exploding around the world, making the energy sector a huge investment opportunity this year and beyond. According to the BP Statistical Review of World Energy, global oil consumption reached 88 million barrels per day (bpd) in 2012.

The International Energy Agency (IEA) projects that global oil demand will increase by another 7 million bpd by 2020. The IEA also estimates that by 2030 the oil reserve equivalent of four Saudi Arabias will need to be discovered and tapped, merely to keep pace with the world’s appetite for oil.

In November 2007, Ecopetrol launched an initial public offering on the Colombian Stock Exchange (BVC), which raised 5.7 trillion Colombian Pesos (COP), or USD2.8 billion, from the sale of a 10.1 percent stake.

Ecopetrol has been on an upward trajectory ever since. The company temporarily dethroned Brazil’s Petrobras SA (NYSE: PBR, PBR A) last year to become the largest company by market cap in South America, according to Platt’s 2012 “Top 250 Global Energy Company Rankings.” (Petrobras has since resumed its dominant position with a market cap of $128 billion, compared to Ecopetrol’s $118 billion.) Ecopetrol also ranks as one of the top 50 oil companies in the world.

Despite Ecopetrol’s rapid ascent, Colombia is largely shunned by investors because of the country’s reputation as a socio-political basket case. Riven by a War on Drugs in tandem with a bloody civil conflict, the country has been symbolic of everything wrong with the Latin American region.

But that’s all changing. This beleaguered country is finally on the track to recovery, with an increasingly sophisticated economy and a government that has transitioned from “banana republic” to a parliamentary democracy that emphasizes human rights.

Colombia is now intent on leveraging its greatest economic strength: oil and gas. Colombia may be stained with a bloody history, but the country’s oil production growth over the past 30 years has been a regional success story.

Today, Colombia is the third-largest Latin American exporter of oil to the US, a statistic that would surprise many people. Considerable oil exploration in Colombia remains to be conducted offshore and in the dense Andean interior. Colombia’s energy officials last year determined that the country was home to about 2 billion barrels of proven crude oil reserves, up from an estimated 1.9 billion barrels in 2011. 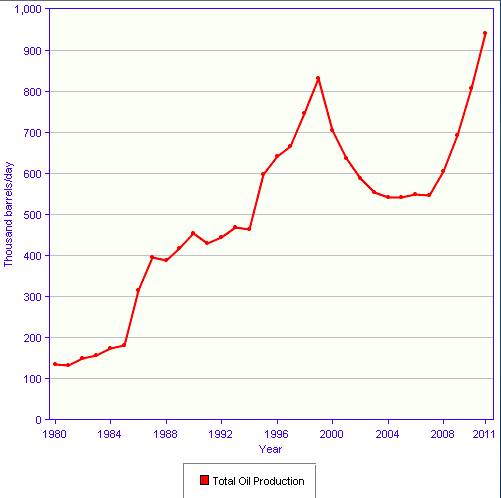 Partly government owned, Ecopetrol is by far Colombia’s largest oil company, with plans to double its output by 2020. The company now pumps an average of 780,000 bpd, accounting for 60 percent of Colombia’s total production.

Ecopetrol is expanding its exploration and production footprint in Peru, Brazil, and the US Gulf Coast. The company also owns the main refineries in Colombia, and the majority of the country’s oil pipelines and petrochemical plants.

Ecopetrol is benefiting from newly initiated peace talks between Colombia’s government and the Revolutionary Armed Forces of Colombia, or FARC. The peace process is the first in more than a decade and aims to end 50 years of bloody internecine war.

In late 2012, Ecopetrol officials reported a major decline in attacks by Colombian rebel groups on oil pipelines and other infrastructure, which will enable the company to maintain pumping rates with scant disruption.

One of the company’s key impediments has been its inability to efficiently transfer oil from its fields in eastern and interior Colombia to transshipment points along the coast. As a remedy, Ecopetrol constructed a USD4 billion pipeline to carry oil from these remote areas of the country to its Caribbean ports.

The company also is creating the necessary infrastructure to ship across the Pacific, to supply the insatiable energy demands of developing markets such as China and India.

Ecopetrol reported that revenues, operating income, EBITDA and earnings in the nine-month period ended September 30, 2012, increased by 10.0 percent, 3.7 percent, 4.1 percent and 2.3 percent, respectively, compared to the first nine months of 2011.

The company reported that third-quarter 2012 revenue reached USD9 billion, up 1.2 percent compared to the same period a year ago. However, earnings came in at USD1.8 billion, a drop of 12 percent quarter-over-quarter and 22 percent year-over-year. It should be noted, though, that the earnings decline largely stemmed from investments that will hold the company in good stead in 2013.

In 2012, the company unveiled an ambitious investment plan for 2013, with total expenditures of USD9.5 billion, for a production target of one million clean barrels by 2015 and 1.3 million by 2020. Ecopetrol’s estimated average production for 2013, including interests in affiliates and subsidiaries, is 798,000 bpd.

With a trailing price-to-earnings (P/E) ratio of only about 14, the company’s stock is a bargain considering its growth prospects and virtually unassailable position in the increasingly prosperous and peaceful region.

This Latin oil stock may not make you as rich as the Rockefeller paterfamilias, but it’ll likely pump significant gains into your portfolio.