Small-Cap Stocks: The Time to Invest is Now

In Buy Small-Cap Stocks Before They Grow Up, I discussed how small-cap stocks ($250 million to $3 billion) have outperformed large-cap stocks (over $10 billion) by a significant amount over the long term. Since 1926, an investment of $10,000 in large-cap growth stocks became about $10 million… but the same amount in small-cap value stocks exploded into almost $900 million! 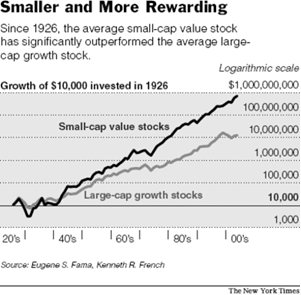 Small and mid-cap stocks comprise about 20 percent to 25 percent of total stock market capitalization (page 4), so a market-neutral exposure requires that a similar percentage of your personal equity portfolio should be allocated to small and mid-caps. Simply put, if you want outsized returns, you must invest in small-cap stocks. All ten of the top-performing stocks of the past decade were small caps and most were value stocks. I can almost guarantee that the top-performing stocks of the next decade will be small caps as well.

But long-term outperformance says nothing about the short term, and small caps don’t outperform large caps all of the time. As both Vanguard founder Jack Bogle and The Leuthold Group have pointed out, small-cap and large-cap stocks alternate multi-year time periods where one group does better than the other. The question investors face today is whether small caps or large caps are likely to outperform in the immediate future?

Looking at the political and economic landscape right now, I am convinced that the pendulum of future outperformance appears to be squarely in favor of small caps. My reasoning centers around two powerful forces:

Both of these forces are extremely favorable for small-cap stocks. According to a 2008 academic study: “Relative to large cap equities, small caps are more sensitive to changes in political and monetary conditions” (page 8).

A second Obama administration bodes well for small stocks. However you feel about the 2012 election, there’s a well-documented reality that can’t be ignored: stocks generally perform better during Democratic presidencies. Even better, a 2003 study and a 2012 study both conclude that small-cap stocks significantly outperform large-cap stocks during such periods of Democratic control.

The research backing this finding goes all the way back to 1929. Indeed, from 1927 to 1998, small-cap stocks perform an astonishing 18% per year better during Democrat administrations and beat large caps by 7.5% per year, compared to underperforming large caps by 4.5% per year under Republicans. What’s more, the updated numbers through 2010 (which include the Clinton and Bush years as well as the first two years of Obama) uphold the small-cap outperformance in Democratic administrations:

Most likely reasons: Democrats are believed to “help the little guy,” including small businesses. They’re also known to favor easy money to maximize employment, and don’t worry too much about triggering inflation. Since small companies don’t hold much debt or suffer from unfunded pension obligations, higher interest rates don’t affect them much, and they outperform relative to large companies carrying heavy debt.

Most of this surprising small-cap/Democrat advantage occurs during the first 13 months after the election. Consequently, time is of the essence! I’m advising my subscribers to expect a very good year for small caps in 2013.

Small caps outperform when inflation hits. Small companies excel during inflationary times because they typically offer unique products with few alternatives, so they have more leeway to raise prices than larger firms do.

What’s more, they can adjust pricing and behavior on the fly. A big company run by centralized management on a five-year plan isn’t as nimble. Like zippy little PT boats, small stocks can quickly change course. Large-cap “battleships” may have more fire power, but they take forever to change direction.

According to Doug Roberts, chief investment strategist for ChannelCapitalResearch.com, inflation is actually positive for small-cap stocks in the long run. During the 1977-79 peak of the inflationary 1970s, for example, blue-chip stocks went nowhere, but small stocks surged:

People say ‘stagflation, it’s going to kill the equity markets.’ And to a certain extent, it has in the past, but that’s from a large-cap perspective. If you take a look at small caps, even on an inflation-adjusted basis, it’s like a rocket ship taking off. Small caps actually had the rally of their lifetime during the stagflation environment [of the late 1970s].You had high double-digit returns during that entire stagflation period with the exception of one year.

In six major inflationary periods since World War II, including the Korean War, the Vietnam War, the OPEC oil crisis and the Persian Gulf War, small-cap stocks beat large caps by a mile. When you add up the returns over all six periods, small caps were up 82.6%, versus just 35.1% for large caps. That’s a 47.5% margin of outperformance for small caps (page 4). During these same inflationary periods, mid-cap stocks ($3 billion to $10 billion) outperform large caps by a smaller but still significant 29.0%.

Besides the continued monetary stimulus coming from the Federal Reserve, one factor likely to keep the stock market afloat is the renewed enthusiasm of individual investors. Ever since the 2008 financial crisis, investors have been scared and continually pulled money out of the stock market and parked in bonds. During the first week of 2013, investor fear disappeared and equity mutual funds experienced the largest fund inflows in more than ten years! (since May 2001). If you combine equity mutual funds and equity ETFs, total fund inflows still showed the largest weekly increase since mid-2008.

Bank of America analysts are forecasting a “great rotation” into stocks and out of bonds in 2013 as interest rates finally start to rise as more than four years of extraordinary central bank stimulus comes to an end. Indeed, on January 28, 2013 10-year U.S. Treasury rates exceeded 2% for the first time since April 2012:

Break-even rates between 10-year Treasuries and 10-year TIPS – a measure of inflationary expectations — are at 2.53 percent, near six-year highs:

Minutes of the U.S. Federal Reserve’s December 12th policy meeting reflect increasing uneasiness of quantitative easing and several voting members expressed a desire to end the money printing “well before the end of 2013.” The release of the Fed’s December minutes on January 3rd caused bond prices to plunge because of inflationary fears, with U.S. Treasuries suffering their worst performance to start a new year since 2009. This is good news for stocks because stocks initially rise when bond prices fall and rates rise. Higher interest rates suggest stronger economic growth and higher corporate profits. Even better, small caps outperform large caps when interest rates are rising and when economic growth is accelerating: 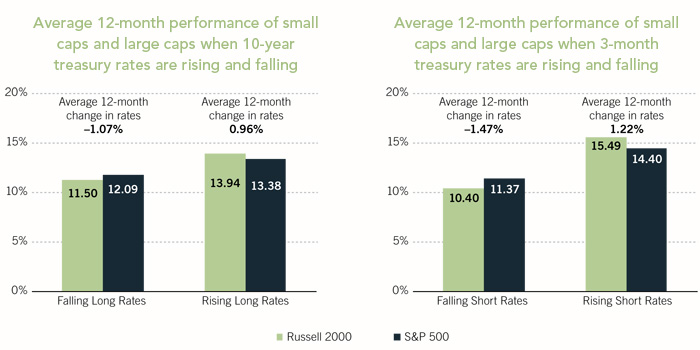 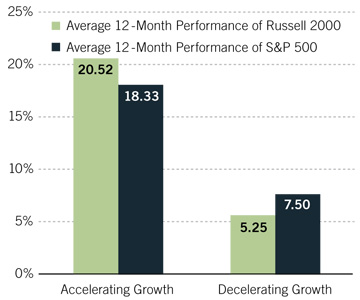 Evidence that U.S. economic growth is strengthening can be seen in the Economic Cycle Research Institute’s Weekly Leading Index, which rose to its highest level in 21 months. Technical evidence includes a bullish breakout in crude oil, as well as transportation stocks breaking to all-time highs. According to superstar hedge-fund manager David Tepper, U.S. economic growth is set to accelerate to as much as 3 percent in 2013, which means:

This country is on the verge of an explosion of greatness. The key is to be long equities this year.

Specifically, the equities to be long are small caps! According to money manager Legg Mason: “Valuations of the stocks in the Russell 2000 index are still below their long-term average values, even despite the index being at such a high point.” Similarly, the Royce Funds, a small-cap specialist, has pointed out that small-cap valuations are especially attractive among those companies with the highest-quality financials (the kind Roadrunner Stocks focuses on):

A Small-Cap “Sweet Spot” is Now

With Democrat Obama in the White House for four more years and the Federal Reserve’s “inflation concerns be damned” policy of printing money to reduce unemployment, the political and economic environment is perfect for a quality small-cap run of significant outperformance.