A Stock With Vertical Lift

“Aeronautics was neither an industry nor a science. It was a miracle.”

Aircraft engineer Igor Sikorsky designed, built and flew America’s first viable helicopter in 1939. The helicopter manufacturing company that he founded in 1925, Sikorsky Aircraft, is now a thriving subsidiary of the giant conglomerate United Technologies (NYSE: UTX) and generated more than $7 billion in annual revenue in 2012.

Igor’s greatest legacy is the emergency medical services (EMS) helicopter. First and foremost, he envisioned his newfangled flying machine as a lifesaving device.

Helicopter EMS represents a $2.5 billion-a-year business in the US and it continues to grow. The US Federal Aviation Administration counts the EMS helicopter fleet (both rotorcraft and fixed-wing) at approximately 1,000 aircraft; about 850 are private sector enterprises and about 150 are operated by governmental entities.

Every year, Air Methods’ fleet of 400-plus rotary and fixed-wing aircraft flies more than 106,000 missions, for about 140,000 total flight hours. It typically transports about 100,000 patients a year. Supporting these aircraft are 3,150 employees nationwide, including pilots, medical personnel, mechanics, flight controllers, and administrative staff.

Considered the “gold standard” in EMS care, Air Methods is positioned for significant growth in 2013 and beyond, as the nation’s health care system experiences a huge influx of 32 million Americans newly covered under the Patient Protection and Affordable Care Act (PPACA), commonly called Obamacare.

Helicopter EMS operators don’t make money for being on call; they get paid for each patient transport, which can cost the payer as much as $20,000. Air Methods’ current payer mix for program services is private insurance 35 percent; Medicare 31 percent; Medicaid 21 percent; and the uninsured 13 percent.

The US Department of Health and Human Services estimates that the number of persons worldwide aged 60 years or older will increase from about 605 million today to more than two billion by 2050.

This demographic shift is particularly pronounced in the US. The emergency medical needs of the country’s rapidly aging population is reflected in the growing rates of trauma and the increased occurrence of time-critical conditions such as heart attack and stroke. The first hour of treatment—known in the EMS industry as the “golden hour”—will take on greater importance.

As by far the largest for-profit helicopter EMS provider, Air Methods is best equipped to capitalize on this secular trend. The company is organized into three divisions: Hospital-Based Services (HBS), Community-Based Services (CBS) and the Products division.

Under an HBS contract with Air Methods, the health care facility hires EMS personnel and communications staff, to run its own air ambulance program. Air Methods leases its pilots, aircraft and mechanics, freeing the client to focus on medical care.

The Products division designs, builds and certifies air medical interiors for helicopters, providing an additional and steady revenue stream. Among the models it services are those made by Sikorsky.

As the chart below clearly shows, Air Methods boasts a robust income statement: 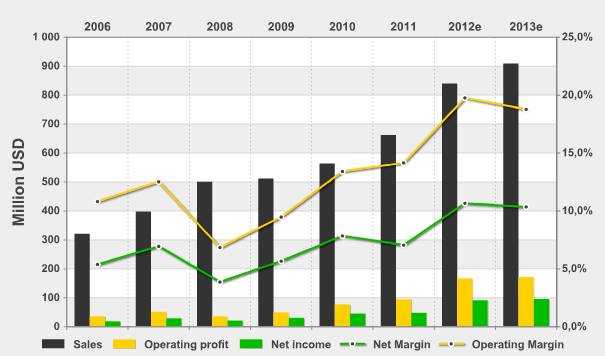 To sustain its steady annual growth, Air Methods has pursued an aggressive strategy of expansion through the acquisition of rival helicopter operators. The company acquired Mercy Air in 1997; ARCH in 2000; Rocky Mountain Holdings in 2002; and CJ Systems in 2007. The company has quickly absorbed these companies and leveraged their fleets for greater economies of scale.

In late 2012, Air Methods acquired Sundance Helicopters for $44 million in cash. Sundance operates a fleet of 22 helicopters based out of Las Vegas; it generated revenue of $52.3 million for the fiscal year ended March 31, 2012.

In December 2012, Air Methods unveiled plans to buy 42 new aircraft, 20 from Bell Helicopter, a division of Textron (NYSE: TXT), and 22 from Eurocopter, a division of European Aeronautic Defence & Space Co, or EADS (Paris: EAD). Delivery is slated to begin in 2013. The additional aircraft will allow Air Methods to fly more missions and support its expanding empire of bases.

Also in December, Air Methods declared a special cash dividend of $7.00 per share (on a pre-split basis) on the company’s common stock, payable on December 28, 2012 to stockholders of record, representing a 5.4 percent boost for its unitholders. In the same month, stockholders approved a three-for-one stock split.