The Oldsmobile came to considered stodgy and, well, old; this was the car your dad drove. The same goes for certain stocks that many investors now consider as has-beens.

But some of these old-timers are definitely worth a closer look. They’re the same companies that were sought after most of the 20th century for their reliable growth and dividend streams.

Having survived the 2008 financial crisis, some of these same names have reinstated their dividends or are building them back up to prior levels. And they have a renewed focus on growth.

Below are two iconic American names that are re-inventing themselves and are still relatively low priced, with solid and growing dividends.

The king of the hill when it comes to old-fashioned, dividend-paying stocks is probably General Electric (NYSE: GE). GE had been paying dividends for as long as anyone cared to remember.  But GE did not go unaffected during the financial crisis.

And they didn’t stop there.  The quarterly dividend is now $0.19 per share, up 90 percent overall.

And GE’s share price is back to pre-crisis levels.  After bottoming in March 2009 at less than $7 per share GE has more than tripled, trading today around $23.

GE stock was recently priced at 14 times the 2013 consensus earnings estimate of $1.68 per share, and yields 3.25 percent. Since GE currently has a dividend payout ratio of around 26 percent, this leaves the mega-cap stock plenty of room to keep that dividend growing.

In the past several years, GE has shed a host of underperforming businesses. It is an innovator with extensive operations in fast-growing emerging markets, and close to $200 billion in cash. And it’s now focused on expanding in the energy infrastructure sector, where we think it will emerge as one of the leaders, driving the firm’s growth into the next decade.

In the Driver’s Seat

While Ford (NYSE: F) did not get bailed out by the US government and fared a little bit better than GM during the financial crisis, shareholders found little comfort in that. Ford shares hit a low of $1 in 2009, although they have since rebounded to around $13.

Unlike GM, Ford had suspended its dividend back in 2006, long before the financial crisis hit. And not paying a dividend may have benefited the stock during the crisis years.  It wasn’t until 2012 that Ford reinstated its dividend, picking up right where it left off in 2006 with a 5-cent quarterly payout, which was doubled to 10 cents for 2013. 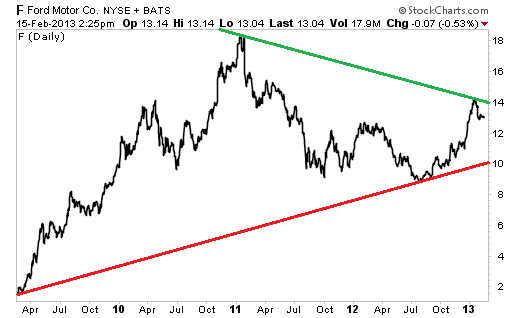 In 2013, Ford is likely to benefit from continued strong growth in US auto sales due to record age of the cars on the road, easy consumer credit, and high used-vehicle prices.  Earnings for 2013 are expected to be $1.40 per share, resulting in a price-earning ratio of 9.25 on forward earnings, and a dividend yield of just over 3 percent

Ford’s emphasis on quality is paying off as well. The company’s cars are now sought after instead of being pushed on consumers through heavy incentives. We expect continued improvement in Ford residual values thanks to dramatically better vehicles such as the Explorer, Taurus, and 2013 Fusion. The Ford brand came in fourth place in the ALG’s 2012 perceived quality study.

Another key change is restructuring. Ford will be building its relatively few models on common platforms, which will improve economies of scale save Ford billions of dollars in costs.

In 2008, Ford sold both Jaguar and Land Rover to India’s Tata Motors; in 2010, it sold Volvo to China’s Geely. With the Mercury brand shut down and Ford owning just 3.5 percent of Mazda, this means that the Ford and Lincoln brands will determine the company’s success.

So far, Ford has done well with its Ford line (Focus, Taurus, 2013 Fusion) and is now revamping Lincoln to make it into a brand consumers would want to trade up for.

What did you think of this article? Please post your comments below!

Steven Orlowski is a 20-year veteran of the investment business. He has worked for some of the most prestigious firms in the world in a variety of capacities, including portfolio manager, trader and high net worth financial planner.