The most valuable commodity in the business world today is information, and that’s especially true in the health care field, where success isn’t just measured in dollars and cents but also in human lives.

One of the hottest trends in the health sector is federally mandated electronic recordkeeping. As the use of Electronic Medical Records (EMR) proliferates and the technology behind it becomes more advanced, the federal government has come to the conclusion that it’s an inevitable trend of great benefit to society.

Consequently, the 2009 American Recovery and Reinvestment Act (known as “the Stimulus Bill”), includes a total of $19.2 billion that’s designated as financial incentives to physicians and hospitals to adopt EMR.

This portion of the bill is called the Health Information Technology for Economic and Clinical Health Act, or HITECH. Incentive payments are available to qualified physicians and hospitals, to assist them in the purchase, implementation and “meaningful use” of a federally certified EMR system.

These HITECH payments represent a huge pot of money for companies that specialize in the electronic records industry.

The company that’s best positioned to benefit from this regulatory landscape is Allscripts Healthcare Solutions (NASDAQ: MDRX). The Chicago-based technology company’s revenue has more than doubled from $548 million in 2009 to about $1.44 billion in 2012—and it faces even better days ahead.

Health care spending as a share of US gross domestic product reached an all-time high of 18.2 percent in 2011, up threefold since 1960. Advocates of EMR argue that the technology will not only reduce costs and eliminate administrative waste, but also enhance the quality of care. It’s a persuasive rationale, now backed by federal law.

Allscripts saw the writing on the wall sooner than its competitors. It lined up clients during the nascent stage of the EMR transition and lobbied hard on Capitol Hill for HITECH’s passage. Now, the company’s prescience is paying off.

Payments are made incrementally, with larger payments in the early years and lower payments over time, each totaling as much as $64,000 (for individual providers) and up to $11 million (for hospitals), according to formulas that take into account the amount of health services provided.

For example, payments for physicians are linked to 75 percent of the physician’s annual allowed charges from Medicare, up to the maximum annual bonus.

But behind the financial carrots are very big sticks. Adding further urgency to EMR adoption are the strict penalties for not doing so. If an EMR solution is not implemented by 2014, not only will health care providers be unable to collect reimbursement, but they also will be subject to onerous financial penalties.

For example, physicians who choose not to participate will receive a 1 percent reduction in their Medicare allowed charges, beginning in 2015. This reduction will increase by 1 percent each subsequent year, up to a maximum of 5 percent.

Moreover, to ensure that every dollar is used for the intended purpose of promulgating EMR, the government has attached a crucial proviso: physicians and hospitals seeking to qualify for incentive payments must demonstrate that they’re actually using the technology.

In other words, purchasing and even installing an EMR system is not sufficient. Health care providers must demonstrate that they’re beneficially and efficiently, or “meaningfully,” using the system in the real world. This prevents providers from buying a new EMR system, getting paid by the government, and then mismanaging or underutilizing the system.

Allscripts foresaw this all-important criterion. In addition to providing the integrated software packages necessary to digitize health records, the company also handles implementation and records management and helps providers prove meaningful use to the federal government.

The company will benefit from its entrenched position in the field and the fact that the sector is fast growing but still underpenetrated. As the chart below shows, US primary care physicians are woefully behind their counterparts around the developed world when it comes to the use of EMR.

Despite significant gains since 2009, the US still ranks near the bottom among industrialized nations in terms of adopting EMRs, laying the groundwork for an EMR “gold rush” for at least the next two years as stragglers race to catch up and beat the federal deadline: 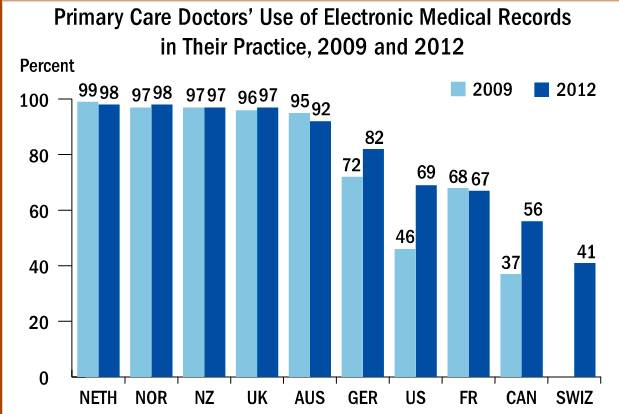 Electronic recordkeeping systems in the US are far more prevalent in other sectors, such as finance, transport and manufacturing, than in health care—which is counterintuitive, because health care providers and patients arguably benefit the most from the transition of paper-based to electronic records.

Despite its recent slowdown in growth, Allscripts still faces excellent long-term prospects. More than 160,000 physicians, 800 hospitals and nearly 8,000 post-acute and homecare organizations already use Allscripts’ data management solutions. This substantial referral base gives the company a leg-up on competitors vying for this vast pool of potential business.

With a forward price-to-earnings (P/E) ratio of only about 12, Allscripts boasts one of the lowest valuations in the booming health care technology industry, which sports an average P/E of about 30.

The adoption of EMRs is a secular trend that’s also buttressed by a multi-billion dollar federal incentive program. Allscripts is in the healthiest shape to reap the spoils.