Driving Into the Blend Wall

Last week the share prices for refiners were dinged as the cost of complying with US ethanol mandates skyrocketed. Several refining stocks were downgraded as a result. So is it time to turn cautious on the sector? And what exactly is this all about?The Energy Policy Act of 2005 created a Renewable Fuel Standard (RFS) requiring 7.5 billion gallons of renewable fuel — primarily corn ethanol — to be blended into the fuel supply by 2012. An ethanol gold rush ensued and producers quickly overbuilt ethanol capacity. Ethanol margins dropped, and producers suddenly found themselves in dire financial straits. The US government came to the rescue by expanding the ethanol mandate with the Energy Independence and Security Act (EISA) of 2007. The new Renewable Fuel Standard — the RFS2 — accelerated the renewable fuel adoption schedule. Instead of 7.5 billion gallons by 2012, the new law required 9 billion gallons by 2008, soaring to 36 billion gallons by 2022.

Peter Gross, a renewable fuels expert at the US Energy Information Administration (EIA) explained to me how RINs work in response to an email query:

All obligated parties (refiners and importers of refined fuel products) must satisfy their “renewable volume obligation” (RVO) which is essentially their share (based on how much fuel they produce or import) of the total renewable fuel that must be used [RR: For 2013 the proposed volume is 16.55 billion gallons.] Volumes of blended renewable fuel are assigned RINs (renewable identification numbers). If a particular party cannot blend their share, they may buy these RINs from parties that have over complied on their RVO (though some alternatives exist such as carrying a RIN deficit for one year or using one’s own excess RINs from the previous year). In any case, every year every obligated party is required to document its RINs and show that they have the same or more than their RVO to the EPA. If they don’t, they can carry a deficit as mentioned earlier or they will be penalized by the EPA.

The problem was (and is) that no commercial cellulosic ethanol production existed when the mandates were set. But Congress decided it could legislate that industry into existence. And even though the mandates failed to create the industry on schedule, the US Environmental Protection Agency (EPA) still requires gasoline blenders to use this cellulosic ethanol fuel that doesn’t commercially exist. Gasoline blenders felt that this was a tad bit unfair, and so they sued the EPA — and won. For more on this, see the recent What a Waste! The EPA’s Biofuel Boondoggle. (In fact, the only company that has produced approved cellulosic ethanol — a 20,069 gallon batch made in April 2012 — recently filed for Chapter 11.)


A second problem that the RFS2 set in motion was a future collision with the “blend wall.” This man-made hazard stems from the fact that Americans are burning less gasoline than we used to, so that meeting the EPA’s ethanol mandate would require a higher ethanol content than the current allowable maximum of 10 percent in regular unleaded.


But the ethanol consumption quotas assumed that gasoline demand, and therefore ethanol use, would continue to grow. Instead, the passage of the RFS2 coincided with a period of record fuel prices, so US demand for gasoline fell from 142 billion gallons in 2007 to 133 billion gallons by 2012. Accelerating ethanol mandates and falling gasoline demand meant that the blend wall was reached earlier than expected. According to the EIA, the 10% ethanol volume limit was reached in June 2011. 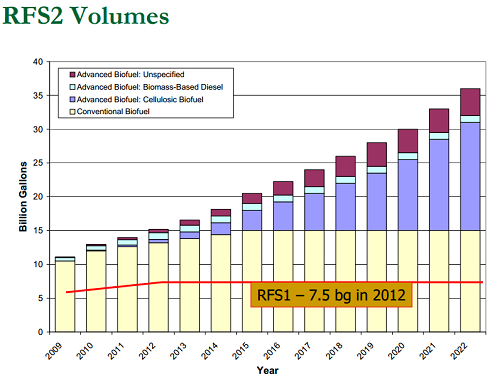 Ethanol producers still had two avenues for increasing sales. The first was the E85 fuel standard for flex-fuel vehicles, boosting ethanol content in such fuel to 85 percent. The potential market for E85 is huge. If just the vehicles in the Midwest — the area where almost all US ethanol is produced — used exclusively E85, then some 35 billion gallons could be used there alone. At those volumes of ethanol, there would be no blend wall issues in the foreseeable future.

However, because of a lack of fueling infrastructure, an insufficient fleet of flex fuel vehicles and, perhaps most importantly, uncompetitive pricing — the E85 market has been very slow to develop. Since flex fuel vehicles running on E85 suffer reduced fuel efficiency because of the 27 percent lower energy content of E85, the price of E85 must be sufficiently discounted relative to gasoline to make it worthwhile. The actual fuel efficiency loss on E85 varies with the automobile, but is typically greater than 20 percent. The E85 price discount, on the other hand, has been pretty consistently below 20 percent, eliminating the economic incentive to use E85 (beyond the tax credit for the purchase of flex fuel vehicles).


The second option available to ethanol producers wishing to hurdle the blend wall is to export. And, in fact, ethanol exports soared once the blend wall was reached. This practice was especially controversial because it was widely reported that US taxpayers were subsidizing this practice. I discussed the reasons for the controversy in a series of articles in 2011 and 2012.

But the ethanol lobby found a third way, by petitioning the EPA to raise the allowable limit on ethanol content in conventional gasoline to 15 percent. If this higher ethanol concentration were mandated, it would immediately increase ethanol’s market potential in the US by 50 percent.


The E15 push was opposed by automakers, oil companies, food producers and environmental groups. Each lobby opposed the higher limits on different grounds, with automakers concerned about vehicle damage from using E15 in automobiles that weren’t designed for that concentration of ethanol. (Ethanol is more corrosive than gasoline, and while these corrosion issues can be addressed, cars that weren’t designed for higher levels of ethanol can be damaged.)

Despite the protests, the EPA ultimately approved E15 for use, initially for model year 2007 and newer cars and light trucks, and later expanding that for use in 2001 and later models. However, since it was allowed and not mandated — and damage could still result from using E15 in boats, motorcycles, small engines, and older cars — I predicted that adoption of E15 would be close to zero.


In fact, that is exactly what has happened, which means that the blend wall has become a serious issue pitting government aspirations against economic realities. Gasoline blenders are now being asked to blend impossible volumes of ethanol into the fuel supply given the lack of wide acceptance for E15 or E85. Because they must purchase RIN credits if they don’t meet these obligations, the price of the credits has soared and the cost of compliance has risen sharply in recent weeks.

The Financial Times recently reported that the price of ethanol credits has risen 1400 percent — from pennies to more than a dollar each — since the beginning of 2013. This not only hits the refiners’ bottom line, but also encourages them to export fuel, since exports are exempt from the ethanol blending requirements. The increasingly untenable ethanol mandate has been recently cited as one of the factors behind the earlier-than-normal gasoline price rise thus far in 2013.


The issue of skyrocketing RIN prices has received a good deal of media attention recently and, like the controversial EPA penalties on refiners for failing to blend the nonexistent cellulosic ethanol, this one is likely to end up in court as well. The profit margins for refiners will take a small hit in the short term, but ultimately I expect a legal resolution in their favor.

It’s also worth pointing out that not all refiners are equally affected. For instance, Valero (NYSE: VLO) farsightedly acquired 10 ethanol plants in 2009-2010 after ethanol prices crashed, and can vived now run them to meet its blending needs,


Nevertheless, refiners have been on a tremendous run lately, and any signs of trouble are likely to result in a disproportionate correction. Conservative shareholders who don’t wish to endure a 15 percent correction would do well to put trailing stop losses in place. Longer-term investors are likely to continue to earn rewards on their refinery holdings, but in the near term your mileage may vary as the congressional attempt at central planning backfires.