A Safer Play on the Biotech Bonanza

An urgent need still exists for better treatments to combat the scourge of cancer. The statistics tell a stark story: The global odds of getting stricken with cancer are 44 percent for men and 38 percent for women.

Oncologists, the physicians who study, diagnose, and treat cancerous tumors, believe that the most powerful weapons now available in the War on Cancer are “biologic” drug therapies. Biologics are synthesized not from chemical compounds but from the cells of a living organism, such as a human, animal, plant, bacterium, or virus.

Founded in 1901, Teva is the largest manufacturer and seller of generic drugs in the world. It also produces patented biologic brands and it’s now aggressively targeting the market for “biosimilars,” which are generic, less expensive versions of biologics.

Teva (Hebrew for “nature”) is already in the vanguard of the biologics market. However, as the drug industry’s competition becomes fiercer, Teva is seeking new growth markets and biosimilars fit the bill.

The booming biosimilars market is expected to reach $15 billion in annual sales by 2020, up from only $380 million in 2010. Teva’s major competitors, notably Amgen (NSDQ: AMGN) and Novartis AG (NYSE: NVS), also are branching out into the biosimilars market. However, while Amgen and Novartis are solid biotech players in their own right, Teva enjoys greater diversification and global reach.

Over the next few years, Teva intends to bring to market several new biosimilars. Together with its existing stable of products, Teva should continue to generate outsized future growth but with downside protection.

The market for cancer vaccines grew from $48 billion a year in 2010 to $75 billion in 2012, with a similar growth trajectory expected for 2013. Biologics represent one of the hottest areas of cancer research today. However, an estimated $60 billion worth of biologics will lose patent protection by 2015, creating a significant market opportunity for biosimilars.

Budding biotechs are notorious for showing great promise and then crashing and burning, either because they couldn’t get their drugs through the regulatory gauntlet or they ran out of cash. However, Teva boasts a market capitalization of $34.2 billion and a track record of relatively rapid government approvals, making it one of the world’s largest and most durable biotech firms.

Teva maintains a direct presence in more than 60 countries. Teva certainly isn’t the only player in the crowded generic drug field, but it’s the biggest and reaps advantages from it sheer size and geographical breadth.

In particular, the company’s extensive direct presence in emerging nations positions it for growth over the long haul, as these markets experience a rise in middle class consumers who demand more and better drugs. The increasing incidence of cancer in developing nations, due to the adoption of Western habits, also ensures persistent demand for oncological treatment.

For years, sales in the generic drug industry have been driven by the US and Europe, but now countries such as China have implemented mandates for universal health coverage, opening up vast new markets for companies such as Teva.

As you can see from the graph below, Teva’s stock has been under pressure, in large part because of concern about expiration in 2014 of patent protection for its key therapeutics drug Copaxone, which represents 21 percent of the company’s total revenues. 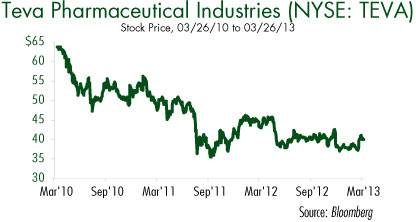 However, this fear is overblown and the stock’s price now represents a rare buying opportunity. Teva’s future prospects should more than compensate for the loss of Copaxone exclusivity.

Teva launched 23 generic products in the US in 2012, and expects a similar number of launches in 2013. In its latest strategic plan, Teva set a biosimilars sales target of $830 million a year by 2015.

Because of looming patent expirations, companies such as Teva are under constant pressure to generate a new pipeline of drugs. A recent study by research firm IMS Health estimates that the expiration of patent protection will result in $79 billion in lost sales for brand-name drugs over the next three years. The pursuit of biosimilars is a logical strategy for survival.

The biosimilars niche is vastly different from Teva’s core business of selling conventional generic drugs, which attracts brutal competition. Generics tend to be close copies of small-molecule drugs and are simpler and less costly to develop and manufacture.

However, with current cash flow of $4.5 billion from all operations, Teva has the deep pockets and research talent necessary for the successful pursuit of biosimilars, a market that poses a higher barrier to entry than the one for generics.

Teva held up well last year, despite the sluggish world economy, which bodes well for the company’s future as conditions improve in most regions. The company reported full-year 2012 revenue of $20.3 billion, up 11 percent from the previous year. Earnings per share (EPS) for the full year came in at $5.35, compared to $4.97 in EPS in 2011.

Teva is a rare combination of huge size and bold innovation. With a current dividend yield of 3.1 percent, this company represents the right balance of risk and reward.