The biggest knock on solar and wind power is their intermittency. In locations like Hawaii, where I live, solar power is already competitive on price (my fossil-fuel supplied electricity typically costs above 40 cents a kilowatt-hour). But since it can’t supply firm power (power that is available on demand) it has to be backed up by power sources that can provide power exactly when it is needed. After all, we all know that the sun doesn’t always shine and the wind doesn’t always blow.

This scenario could change dramatically if cost-effective energy storage solutions were developed. I consider this to be the most important unresolved problem in the energy business. A company that develops a way to efficiently store the sun’s energy when the sun isn’t shining, or wind power when the wind isn’t blowing, will be a game-changer.

The ideal power storage solution would be able to store energy densely, at a reasonable capital cost, and would be able to return that power at high efficiency. For instance, if we put 1 unit of power into the storage system and we actually got 1 unit back out when we needed it, the system would be 100-percent efficient. Real-life efficiencies will be less than 100 percent, but the higher the efficiency, the more desirable the storage option.

A new report on energy storage from Navigant Research predicts that the market for energy storage for the electric grid could surpass $30 billion annually by 2022. Some of the potential options include batteries, pumped hydropower, compressed air energy storage (CAES), flywheels, hydrogen, and fuel cells. And of course nature also has a built-in storage mechanism for solar power (albeit an inefficient one) called biomass. The following figure highlights the biggest problem with most energy storage options — the energy density is simply too low. Energy density measures the amount of energy stored per unit of volume or weight. What this means is that for a given volume or a given weight, the storage options can store only a tiny fraction of energy relative to liquid fuels. 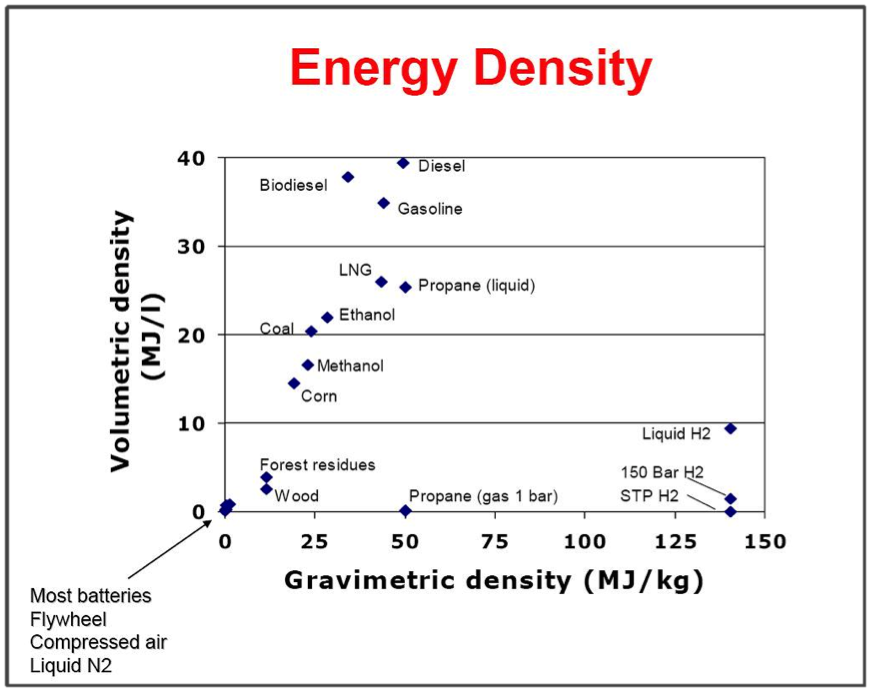 The most energy dense options possible would be those at the top and to the right of the graphic. Were Uranium-235 included, it would have appeared at the top right corner of the graphic. The least energy-dense options would be those at the bottom left of the graphic, which is where we find batteries, flywheels and compressed air. At this scale, the energy density of these storage options appears to be near zero. Relatively speaking, gasoline contains more than 50 times the energy than the same volume of a nickel-metal hydride battery.

Pumped hydropower storage (PHS) is a storage option that is already commercially used in some conventional power plants. The concept is that off-peak power is used to pump water up to reservoir at a higher elevation, and then returned through turbines to produce electricity. A March 2012 report by the Electric Power Research Institute (EPRI) indicated that PHS accounts for 99 percent of utility-scale storage capacity worldwide. PHS has a reported round-trip efficiency of about 75 percent, considerably higher than that of many other storage options.

There are around 50 PHS systems of at least 1 gigawatt (GW) installed around the world, with another 15 or so facilities of this size under construction. Operating facilities exist in the US, China, Japan, South Africa, Russia, Australia, South Korea and in a number of European countries. The largest facility in the world is a 3 GW system in Bath County, Virginia. The primary advantage of PHS is that very large amounts of power can be stored for long periods of time, but accessed quickly. The major disadvantages are that initial capital costs are high and the technology is limited by geography to locations that can host a large reservoir at a significantly higher elevation than the power station.

Compressed air energy storage (CAES) is the second largest category of energy storage. In a CAES system, off-peak power is used to compress air into a storage reservoir. This reservoir is typically an underground cavern, but some work is being done to develop these systems under water, in enclosed bags that expand against the outside water pressure. The first utility-scale CAES facility was built in Germany in 1978, utilizing a salt dome as the reservoir. The first system in the US was built in 1991 in Alabama. A salt cavern is also used in this system, which can compress air up to 1100 pounds per square inch (psi). Other projects are under development, with the US Department of Energy providing funding in some cases.


As with PHS, CAES is limited by geography. Further, the cycle efficiency of the systems currently operating is reportedly 40 percent or less — much lower than with PHS.

Hydrogen is one of the more energy-dense storage options by weight. One kilogram (kg) of hydrogen compressed to a pressure of 150 bar (2,175 psi) actually stores a lot more energy than one kg of gasoline (the horizontal axis is energy density by weight). As shown in the graphic, compressed hydrogen contains more than three times the energy of gasoline per kg (142 megajoules for hydrogen versus 46 megajoules for gasoline).

However, hydrogen falls short when it comes to volumetric storage (the vertical axis). One liter of gasoline contains over 20 times the energy of one liter of 150 bar hydrogen. Thus, one of the limitations of hydrogen as a fuel is that the range of a vehicle running on hydrogen will fall far short of a similar-sized gasoline tank. Nevertheless, the German utility E.ON (OTC: EONGY, Frankfurt: EOAA) is investing in a hydrogen-based storage system. In 2012 E.ON contracted with Canada’s Hydrogenics (NASDAQ:HYGS) to install a power-to-gas system in Falkenhagen, Germany. The idea is that off-peak power is used to make hydrogen from water by electrolysis, and then the hydrogen is injected into a natural gas pipeline. The hydrogen-natural gas mixture can then be used as needed for power production, or for heating.

The efficiency of electrolysis of water into hydrogen can be as high as 85 percent. Hydrogenics reports that the efficiency of its hydrogen fuel cells “is greater than 55 percent” in converting hydrogen into electricity. So we could expect the cycle of converting off-peak power into hydrogen and then back to electricity during peak demand would be (0.85) * (0.55) = 47 percent efficient. In other words, a little more than half of the power sent to storage is wasted. This also implies that the value of peak power would need to be more than twice the value of off-peak power to make such storage profitable. For example, if off-peak power is worth a nickel, and peak power is worth a dime, then a nickel’s worth of power sent to storage is only worth 4.7 cents (47% of a dime) at peak demand. On the other hand, if peak power is worth 15 cents in this scenario, a nickel’s worth of off-peak power can be turned into 7 cents of peak power (47% of 15 cents).

Batteries comprise an enormous global market, and are often used in personal solar systems to provide power at night. But batteries are seldom used to back up power plants because they have low energy density, are expensive and have a limited lifespan. However, a great deal of research is being devoted to the development of advanced batteries, which are projected to reach gigawatt levels of utility-scale storage over the next 10 years. Most of the other options for utility-scale storage are still in development. This is an area that promises to grow rapidly in the coming years given the number of countries implementing aggressive renewable electricity standards. Governments are investing heavily in the development of utility-scale storage.

Investments in energy storage have proven to be risky to date, and will likely continue to be highly speculative for some time. Nevertheless, this is an area that I monitor closely, so if a clear winner in the battle for cost-effective storage begins to emerge, you can expect to read about it in The Energy Strategist before it becomes mainstream news.