Game Over for OPEC?

For more than a decade, the biggest question in energy has been whether production could keep pace with the rapidly escalating demand from emerging markets.

It did, barely, thanks to crude prices that have quadrupled over that span.

The question now, though, is whether the still fast-growing Asian crude demand can keep pace with the even faster-growing production gains in North America, driven by the boom in US tight “shale” oil and increasing exploitation of the Canadian oil sands.

And according to the International Energy Agency, the correct answer over the next five years is a resounding No.

Last week, the IEA’s Medium-Term Oil Market Report projected that global demand will rise by 6.9 million barrels a day (mb/d) between 2012 and 2018. That would represent a 7.7 percent increase from the nearly 90 mb/d consumed at the end of 2012, which sounds like a lot but in fact assumes annual growth of just 1.2 percent.

China’s oil consumption is expected to rise 25 percent in six years, which would actually represent a slowdown from its recent pace. India’s crude demand is forecast to jump 19 percent and Saudi Arabia’s 25 percent, while consumption by developed economies is expected to continue declining gradually.

But those extra 6.9 million barrels in daily demand will be amply offset by 8.4 mb/d of added supply capacity, according to the EIA. Nearly half of that will come from North America and fully one-third from the US, mostly from the tight-oil formations conquered with new technologies of horizontal drilling and hydraulic fracturing.

“North America has set off a supply shock that is sending ripples throughout the world,” said IEA Executive Director Maria van der Hoeven. “The good news is that this is helping to ease a market that was relatively tight for several years. …But as countries rethink their strategies, and as emerging economies become the leading players in the refining and demand sectors, not everyone will be a winner.”

The list of the biggest potential losers starts with the Organization of Petroleum Exporting Countries (OPEC). Although the exporters’ cartel is expected to increase its own production capacity by 1.75 mb/d by 2018, the spike in North American production should dramatically curb OPEC’s market power. OPEC’s spare capacity is expected to rise from 5.4 percent of global demand in 2012 to 7.7 percent by the end of 2014. And this doesn’t even include the very real possibility that Iran and Venezuela will eventually change the policies that have constrained their exports, adding to the prospective glut of crude. 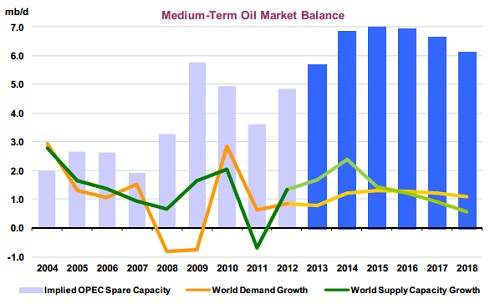 
Refineries in Europe and even the US will also face challenges, as China and the Middle East ramp up domestic fuel production. Global refining capacity is expected to grow even faster than crude production, expanding by a vast 9.5 mb/d by 2018, according to the IEA. In the near term, US refineries should continue to thrive, taking advantage of insufficient capacity in Latin America and the Caribbean as well as refinery closures in Europe to boost exports. But they will ultimately need to reckon with growing competition for exports from the east, as well as major changes in the quality of their domestic slate, as tight oil plays gush light, sweet crude and condensate.

On the other hand, the advanced drilling techniques pioneered in the US will be eventually applied to rock formations from Poland to China to Argentina, adding to the torrent of crude and gas. They will also help countries like Russia, Saudi Arabia and Mexico slow production declines in mature conventional fields.

The US economy should be an even bigger beneficiary, as domestic production curbs crude imports by a third over six years, while boosting exports of value-added fuel.

Africa, whose light sweet crude will be displaced by the similar and cheaper grades from the American interior, will have to find new markets in Asia and forge closer bonds with China, its largest customer and readiest investor.

And US transporters of crude and refined fuels with significant storage capacity and most flexible processing equipment are likely to be major beneficiaries as well, best-placed to capitalize on the inefficiencies of a rapidly changing marketplace. This promises to be a very long gravy train for the largest midstream master limited partnerships, which can deploy extremely cheap capital to reap vast economies of scale and diversification benefits. 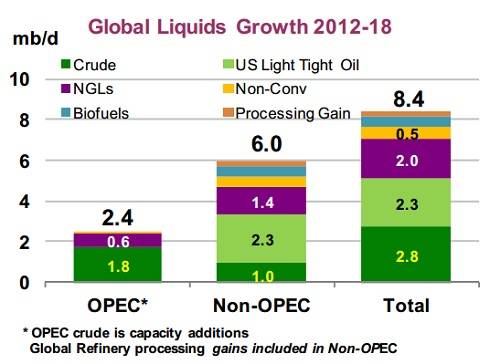 Of course, none of this was exactly news to Mr. Market, which may be why, after briefly testing the downside last week, expensive crude quickly erased May’s losses.

US production is increasing in spurts, and is just coming out of a seasonal lull. Meanwhile, higher OPEC supplies are merely keeping up with growth in global demand rather than providing an increased safety margin against potential disruptions in the Persian Gulf as the Iran’s rogue nuclear program grinds on and the Syrian civil war threatens to draw in Iran as well as Israel.

Closer to home, there are doubts that the US tight oil boom will prove as long-lasting or as lucrative as drillers claim. For example, at the same London energy conference at which the IEA released its report, a panel discussion on US shale drilling focused on the tendency of such wells to deplete much more rapidly than conventional ones, requiring continuing high levels of capital spending on new wells just to maintain output after the early bonanza.

How profitable such drilling will be depends on the extent to which results in the most promising spots already drilled can be extrapolated to other locations in the basins. And despite extremely promising recent results from tight-oil leaders like The Energy Strategist holding EOG Resources (NYSE: EOG), the geology is too treacherous and the track record too short to assume that the US will be able to maintain the upcoming production gains over the long run.

Which isn’t going to stop companies from enthusiastically drilling rocks or building out the pipelines to transport the bounty from the latest shale play for processing and possibly for export.

To stop that, oil would have to drop perhaps 30 percent from current levels, to $70 a barrel or less. And while China’s growth has slowed, it hasn’t slowed nearly enough to make that happen.

It’s always nice when an investment pick gets an endorsement from an investor one respects, and nicer still when that vote of confidence comes in the form of buying by Warren Buffett.  Berkshire Hathaway (NYSE: BRK.B), the financial giant run by the Oracle of Omaha, released its quarterly portfolio holdings last week, and energy infrastructure builder CBI was one of only two new buys.

Berkshire bought 6.5 million shares last quarter, which are worth $420 million now that the stock has run 12 percent on Buffett’s say-so. Actually Buffett (or whoever at Berkshire made the call) can’t claim all of the credit for the recent surge. There was also Friday’s news that the US Department of Energy has authorized a second major liquefied natural gas (LNG) export project. An analyst for BB&T has just estimated that the newly authorized Freeport LNG project could mean $3 billion to $4 billion in new orders for CBI, which specializes in natural gas storage and processing facilities.

The stock has had an eventful ride since we added it to the Growth Portfolio in March, generating a 14 percent loss at its mid-March lows on concerns about lower energy prices and cancellation of an LNG project in Australia. But energy prices have since rebounded while the long line of other US LNG projects awaiting approval now looks more likely to be approved, more than offsetting the Australian disappointment.

And although the stock has rallied 27 percent from the recent lows, Berkshire’s involvement strongly suggests that it’s not done yet, for all the reasons we listed two months ago.

If we had a dollar for every time someone has asked us whether the oil-rig supplier and Aggressive Portfolio holding has missed a dividend payment, we’d have enough to buy an extra share or two by now.

In fact, like many companies, Seadrill prepaid its fourth-quarter dividend in December when it  also made the third-quarter payment, out of concern that the fiscal cliff would result in a big tax increase on such distributions. In the event, taxes on dividends went up modestly, from 15 to 20 percent, and only for individuals making more than $400,000 and couples with more than $450,000 of income.

But the early dividend payment from Seadrill, apparently unnoticed in December, was certainly missed in March by some of the investors clearly in the stock for its attractive 8.4 percent dividend yield.

The stock hasn’t performed too badly either, rallying 17 percent in the last month as buoyant crude prices allayed concerns about demand for deep-water rigs.

There’s little doubt that Seadrill will maintain its dividend when it announces first-quarter earnings next week. The trick here will be to maintain the recent levels of vigilance as the dividends continue to roll in from what remains a heavily leveraged entity subject to cyclical booms and busts in commodity prices.

If you’re waiting for a missing dividend to weed out bad investments, you’re doing it wrong. Fortunately, there remains plenty of value in Seadrill. The company is generating sufficient cash flow to finance the investments in new rigs necessary to maintain its double-digit growth. But no 8-percent yield comes without risk at a time when the 10-year Treasury yield less than 2 percent, as worries about the missing dividend remind us.