Master limited partnerships (MLPs) are a popular investment these days, and now some in Congress want to use them to encourage investment in renewable energy projects. Less has been said about how such new-fangled MLPs might work out for investors. And therein lies the problem.

The first master limited partnership in the US was formed by Apache Oil Company in 1981. But it wasn’t until 1987 that Congress legislated the rules for publicly traded partnerships as laid out in Internal Revenue Code Section 7704.The rules state that at least 90 percent of an MLP’s income must come from qualified sources, such as real estate or natural resources. Section 613 of the tax code requires qualifying energy sources to be depletable resources or their derivatives such as crude oil, petroleum products, natural gas and coal. The range of activities qualifying for MLP treatment has been significantly expanded by the Internal Revenue Service in a series of recent case-by-case rulings.

The main attraction of an MLP from an investor’s point of view is that MLPs don’t pay corporate income tax. Profits are passed directly to unitholders via (usually) quarterly distributions. This is different than the tax liability faced by shareholders in a corporation. Their profits are taxed first at the corporate level, and then a second time as personal income tax on dividends. In contrast, MLP distributions are taxed just once, at the individual level.But MLP distributions aren’t immediately fully taxed either. In fact most of the distribution — typically 80 to 90 percent — is classified as a return of capital under the depreciation allowance, which subtracts capital depreciation from net income to account for the fact that assets like pipelines and wells lose value over time.

The depreciation allowance lowers the immediate tax bill but also the cost basis of the MLP investment, resulting in a larger capital gain when the MLP is sold.Over time the tax-deferred income can be invested elsewhere, allowing investors to compound returns that would have otherwise been taxed, while also earning a steady stream of income. This has made MLPs an extremely popular income investment.

The partnerships, in turn, gain access to a broader pool of stable (and as of late cheaper) capital to finance projects.There are currently more than 100 publicly traded MLPs representing some $445 billion in capital. Approximately $400 billion has gone into qualifying energy and natural resource projects, and the vast majority of that — perhaps 80 percent — into midstream projects such as oil and gas pipelines.

But current MLP rules exclude ventures in renewable energy, and many renewables advocates have long complained that MLPs give fossil fuels an unfair advantage. US Sen. Chris Coons, D-DE) aims to rectify that with the introduction of a Senate bill called MLP Parity Act.

Unlike a previous proposal by Sen. Bernard Sanders (I-VT) and US Rep. Keith Ellison (D-MN) to eliminate the MLP option for fossil-fuel projects, the legislation proposed by Sen. Coons would not affect current or future fossil-fuel MLPs. They would continue to receive the same tax benefits. 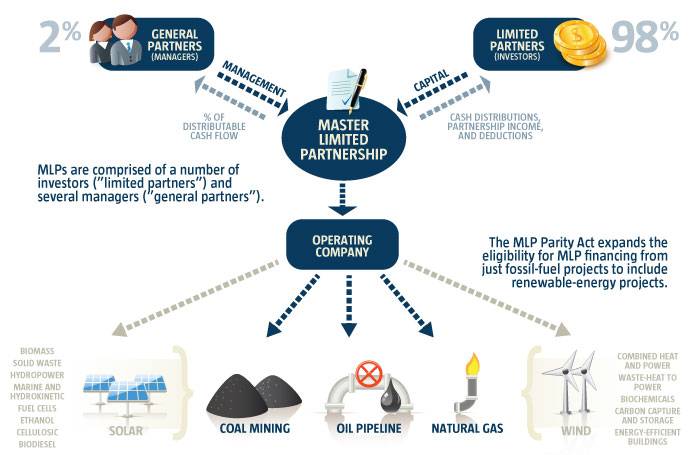 The main reason so many MLPs have been successful is their concentration on energy infrastructure, a booming industry with a long history of strong profitability.  This has attracted conservative investors, and MLP tax rules have given them an incentive to stick around for the long run.

Most renewable energy investments are in a very different business. The vast majority of renewable energy companies exist as a result of mandates at the federal or state level. I don’t mean to suggest that we shouldn’t support renewable energy, merely to note that if certain tax credits and mandates were eliminated, the industry would be decimated because for the most part it isn’t competitive with fossil fuels. Pipeline MLPs have a steady source of income from which to pay distributions. Where are advanced biofuel companies going to come up with the money for distributions? From added debt? From issuing more units?


The fact is that unless they can come up with long-term supply agreements that will see them through even if government support disappears, renewable energy MLPs could prove very risky investments.

Imagine if most advanced biofuel companies could have organized themselves as MLPs three years ago. Would that have prevented the 90 percent decline experienced across the sector? No, and this is volatility that traditional MLP investors will not accept.


The MLP Parity Act enjoys bipartisan support in both houses of Congress, and so has a good chance of becoming law.

And despite my skepticism that it will be a game-changer, I support passage of the bill: all forms of energy, whether fossil-based or renewable — and arguably all business activities in general — deserve a level playing field on taxes. It’s just that I won’t be recommending renewable MLPs until they demonstrate that they can consistently do what pipeline MLPs have done for their investors.