His most significant initiative was to instruct the Environmental Protection Agency to devise carbon-pollution standards for power plants old and new under the authority of the the Clean Air Act, the latest piece of bad news for the already battered US coal industry.

But the president was a lot less clear about another cause dear to the heart of climate change activists: their campaign to stop TransCanada’s (TSX: TRP, NYSE: TRP) proposed Keystone XL pipeline project.

Here is what Obama said on that topic:


Now, I know there’s been, for example, a lot of controversy surrounding the proposal to build a pipeline, the Keystone pipeline, that would carry oil from Canadian tar sands down to refineries in the Gulf.  And the State Department is going through the final stages of evaluating the proposal.  That’s how it’s always been done.  But I do want to be clear:  Allowing the Keystone pipeline to be built requires a finding that doing so would be in our nation’s interest.  And our national interest will be served only if this project does not significantly exacerbate the problem of carbon pollution. The net effects of the pipeline’s impact on our climate will be absolutely critical to determining whether this project is allowed to go forward.  It’s relevant.

Some pundits seized on the bottom-line requirement that “this project does not significantly exacerbate the problem of carbon pollution” as a signal that the pipeline will proceed. Forbes energy reporter Christopher Helman went so far as to conclude that “Obama Declares Keystone XL Will Be Approved.”

As Helman points out, the State Department’s Draft Supplementary Environmental Impact Statement (SEIS) for the Keystone XL Pipeline project has already concluded that approval of the project would have little impact on global carbon dioxide emissions or on the development of the oil sands, because the oil will get to market one way or another.

This is one of the contentious issues in the debate over the Keystone XL pipeline — whether the oil from the Alberta oil sands will get to market even if the pipeline isn’t built.

Keystone opponents like to claim that the rail system isn’t capable of moving Keystone XL volumes. When I ask why they believe this, I get anecdotes attributed to oil companies and pipeline companies suggesting that the pipeline is an absolute necessity in ramping up oil sands production. Or else they assert that rail is simply too expensive to be an alternative method of transport. But these theories are directly contradicted by data.

In the US and Canada we have already seen oil transport by rail increase by about one million barrels per day (bpd) over the past five years. This scale-up is greater than the 830,000 bpd the Keystone XL would transport at full capacity. Bakken oil is now being shipped by rail to refineries on the East Coast, West Coast, and Gulf Coast — and if you listen to the earnings calls or read investor presentations from various refiners, they plan to continue expanding this practice. 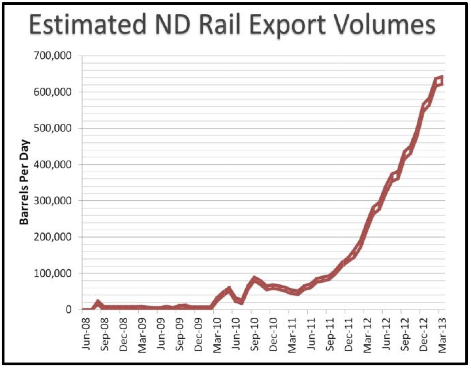 There is nothing special about the US rail system that enabled it to ramp up the transport of crude oil so rapidly. It simply responded to demand as Bakken production exploded and the producers sought access to lucrative and distant markets.

Five years ago, the arguments now deployed against the Keystone XL could have been just as easily applied to the Bakken: production would be constrained because there was simply no way rail could ramp up fast enough to move the Bakken crude out of North Dakota. And of course shipment by rail would be too expensive. Yet it did ramp up, because the explosion in production depressed the price of Bakken crude relative to more widely traded waterborne crudes like Brent, and this created a tremendous incentive for refiners to move that product to coastal refineries one way or another.

As pipeline routes reach capacity, the decision to move by rail comes down to three factors: 1). The cost of rail shipping; 2). The price of crude oil at the destination, and; 3). The differential in the price of crude at the origin and the destination. The Bakken-Brent differential averaged about $20/bbl in 2012. According to a recent investor presentation from Valero, the company can ship Bakken crude by rail to the West Cost for $9/bbl, to the East Coast for $15/bbl, or to the Gulf Coast for $12/bbl. This is the reason crude transport by rail in the US has exploded. Yes, shipping by pipeline is less expensive, but shipping by rail is still economical at such a wide Bakken-Brent differential.

The future of oil sands development depends not on whether Keystone XL is approved. It depends on a sustained high price for waterborne crudes. With heavy Canadian oils trading at a greater than $40/bbl discount to Brent in 2012, it’s no wonder that rail transport of oil in western Canada is also skyrocketing. Over the past two years — from the April 2011 through April 2013 — the volume of oil shipped by rail in western Canada nearly quadrupled, rising from less than 46,000 bpd to more than 177,000 bpd. 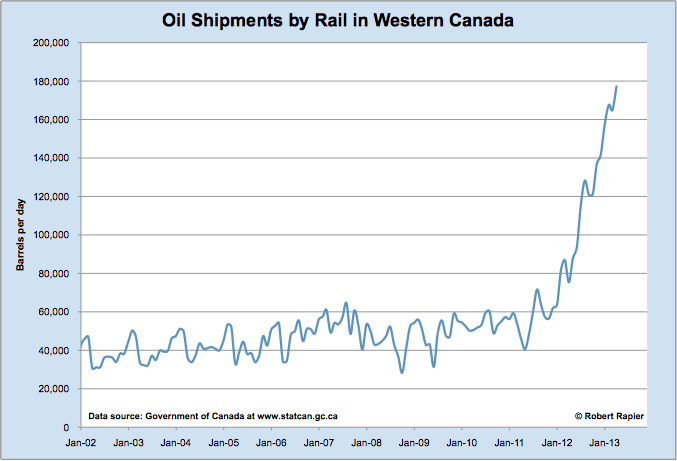 As a result, Canadian rail companies like Canadian Pacific Railway (TSX: CP, NYSE: CP) and Canadian National Railway (TSX: CNR, NYSE: CNI) are turning in the best quarterly results in their histories. Analysts expect this trend of oil via rail to continue, with estimates that 10% of Canada’s oil production will be transported by rail by 2015.

To date, logistical constraints haven’t prevented oil sands production from growing exponentially for the past two decades. In just the past 10 years, Canadian oil sands production has grown by 1 million bpd. As we have already seen in the development of the Bakken in the US — and in the rapid rise in rail transport of oil in Western Canada over the past two years — if the price is right the oil will find its way to market. Logistical problems get solved when the price of oil is high enough. I believe this is the single biggest oversight of environmentalists who believe that shutting down Keystone XL will stall development of oil sands. 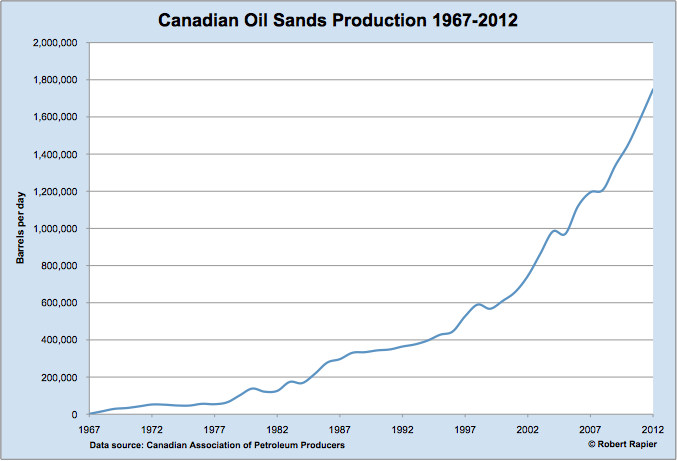 Price will be the determining factor here, and specifically the difference in price between what producers can get for their crude oil locally in Alberta versus what they can get if they can transport it to a port. If that differential is high enough, you will see continued explosive growth in rail traffic, and you may even see convoys of 200-barrel tanker trucks headed from Alberta to Canada’s West Coast.

If, on the other hand, the global price of crude oil falls and remains depressed for years, that would put the brakes on the growth of the oil sands industry as well as the recent surge of oil shipments by rail. I believe that even though we may see some oil price weakness  in the short term, there won’t likely be a sustained collapse in the price of oil. Thus, I believe that the rapidly growing business of oil by rail will continue to expand.