The Hydroelectric Dam in the Room

In debates about renewable energy hydropower is the elephant in the room, the work beast unjustly starved of attention. This week we’ll rectify that oversight with a global snapshot of the industry along with geothermal power, another often overlooked renewable energy source.

Like last week’s report on trends in solar PV and wind power, this analysis is based on two recently released energy annuals, The BP Statistical Review of World Energy 2013 and REN21’s 2013 Renewables Global Status Report (GSR). (Disclosure: I have been a reviewer for the GSR for the past three years).

Hydropower accounts for more electricity production than solar PV, wind, and geothermal combined. It gets far less press because it is a more mature technology with a much lower growth rate than most renewables. While solar PV increased capacity by an average of 60 percent per year over the past 5 years, new hydropower capacity increased at a much more modest annual rate of 3.3 percent. 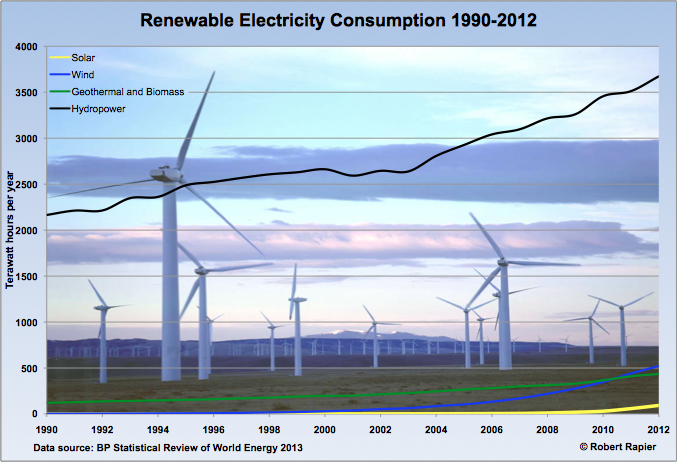 The top countries for hydropower — accounting for 52 percent of global capacity — are China, Brazil, the US, Canada, and Russia. Global hydropower capacity at the end of 2012 was estimated to be 990 GW, which is about 2.5 times the combined global capacity of wind and solar power. (Capacity refers to peak generating capacity at a point in time, while the terawatt hour consumption statistics multiply that instantaneous capacity by the number of hours it was deployed.) 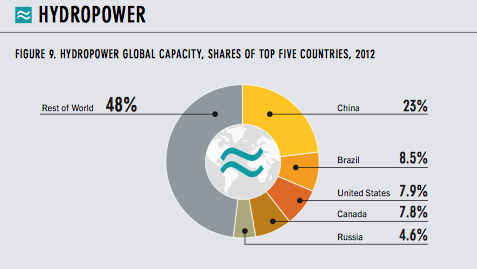 Investors seeking to diversify into hydropower don’t have a lot of options in the US. Idaho Power (NYSE: IDA) and Portland General Electric (NYSE: POR) are two US-based public utilities with a substantial base of hydropower generating resources. However, neither is a pure hydropower play. Investors looking for purer hydropower plays will have to look abroad at companies like Brazil’s Cia Energetica De Minas Gerais (NYSE: CIG), Austria’s Verbund AG (OTC: OEZVF), or China Yangtze Power, which operates the Three Gorges Dam and trades on the Shanghai stock exchange.

Geothermal energy is energy obtained from the earth’s internal heat. It is one of the most environmentally benign sources of energy, producing little to no emissions during normal  operation. Geothermal also has the advantage of being a firm renewable power source, which simply means that is designed to be available as needed, as opposed to intermittent power which may only be available when the sun shines or the wind blows. Like hydropower, producing electricity from geothermal resources is a relatively mature renewable technology, which is reflected by its modest 4 percent annual growth rate over the past five years.

Geothermal electricity is produced when the heat from the earth is used to produce steam, which is then passed through a turbine. Electricity produced in this way generally requires fairly shallow geothermal reservoirs (less than 2 miles deep). Geothermal electricity has a high capacity factor, and the cost of generation is comparable to that of coal-fired generation. Its usage, however, is geographically limited.

In addition to electricity production, geothermal energy can be also be used for heating or cooling. Hot springs or water circulating in hot zones can be used to heat buildings. Geothermal heat pumps take advantage of the earth’s temperature a few feet below the ground—consistently 50° to 60°F—to heat buildings in the winter and cool them in the summer.

Ormat Technologies (NYSE: ORA) offers a purer play as a builder and operator of geothermal plants and supplier of related equipment, but its earnings have fallen steadily in recent years. While the company did beat expectations during the most recent quarter, it will need to string together several quarters of outstanding performance to earn back investors’ trust.