On my recent trip to the Athabasca oil sands near Fort McMurray, Alberta, the logistical issues of getting the crude extracted here to market were a major topic of discussion. The issue has received widespread attention in recent years as a result of the high-profile battle over the Keystone XL pipeline extension.

To review, the Keystone Pipeline is owned by TransCanada (TSX, NYSE: TRP). The pipeline already has the capacity to move 590,000 barrels per day (bpd) of crude oil from the Athabasca oil sands to hubs and refineries in the US. The first phase of the pipeline began operating in 2010 and connects Alberta to refineries in Illinois. In 2011, the second phase of Keystone connected Steele City, Nebraska to the major oil hub in Cushing, Oklahoma.

There are two proposed expansions of the Keystone Pipeline that are collectively called Keystone XL (“XL” stands for export limited.) The southern leg of the pipeline has been built and is due to start transporting oil by year end. This Keystone-Cushing extension will have an initial capacity to transport 700,000 barrels of oil per day from the Cushing hub to Gulf Coast refineries — and did not require federal approval.

The northern leg, however, would cross the US-Canadian border. Therefore the State Department is required to determine that the project is in the national interest in order to grant a permit. This proposed 1,180-mile addition would extend from Hardisty, Alberta to Steele City, Nebraska, carrying up to 830,000 bpd of crude from the oil sands in Alberta and the Bakken oil fields in North Dakota to refineries on the US Gulf Coast.

The Keystone XL pipeline project has probably been the most discussed pipeline project in US history since the Trans-Alaska pipeline of the mid-1970s. Opponents of the Keystone pipeline generally hold the view that the Keystone XL is the key to the expansion of Alberta’s oil sands, and that stopping the pipeline will slow the rate of oil sands development. Such views are exceedingly naive, and demonstrate a general lack of knowledge about logistics projects.

Most people are entirely unaware of the extent to which pipelines already crisscross North America, but it’s akin to an invisible interstate highway system. Below is a partial map of the North American oil pipeline system. There are pipelines crossing through national parks and above critical aquifers, and pipelines crossing our border to the north and south. Yet I constantly encounter people who insist that preventing the Keystone XL pipeline will prevent heavy oil from Canada from making its way into the US. It’s as if this would be an unprecedented development. 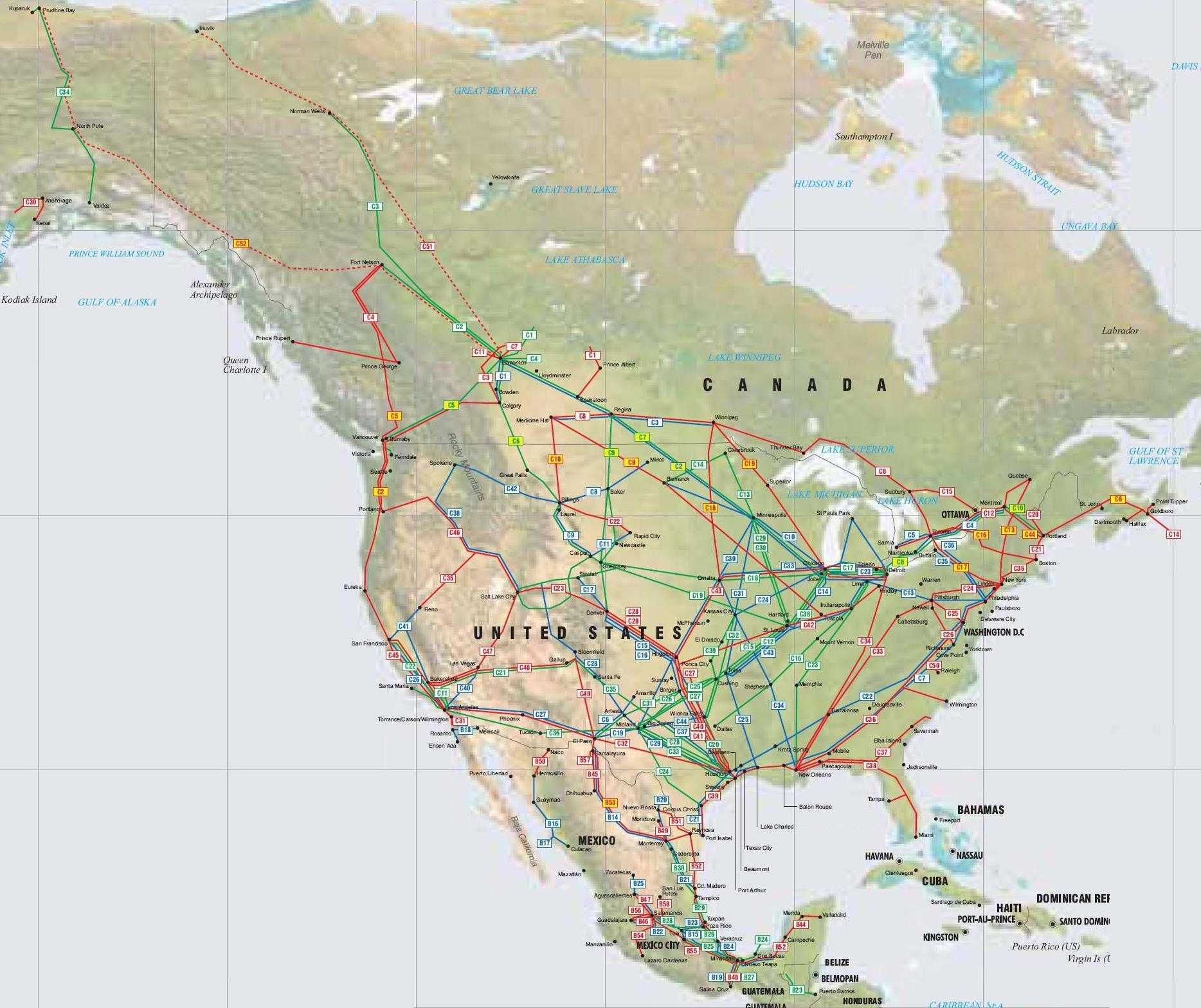 Many are then surprised to learn that the Keystone XL would not be the first, or the 10th, or even the 50th oil or gas pipeline crossing the US-Canadian border. According to the Canadian Embassy in Washington, D.C.,  there are 74 operating oil and gas pipelines that cross the border between the US and Canada. Keystone XL would be the 75th.

Even if Keystone XL opponents are aware that many pipelines already cross the border, they often insist that this one is special, and that this one holds the key to the expansion of oil sands production. Stop Keystone XL, they insist, and oil sands development will stall.

They might even offer up that there is another pipeline proposal called the Enbridge Gateway (also called the Northern Gateway) that would provide an outlet for oil sands bitumen to the Pacific Ocean, but they will insist that there is so much opposition in British Columbia and from First Nations groups that this pipeline is unlikely to be built. They are probably right about that. And that just about sums of the knowledge of 95 percent of the people opposing the Keystone XL pipeline.

But there is so much they don’t know. For example, there were many pipeline proposals being floated before Keystone XL that would have moved Alberta bitumen, but the Keystone XL got a lot of commitments from industry because it made the most sense to ship the heavy oil to US Gulf Coast refineries that were configured to refine heavy oil. This would have backed out heavy Venezuelan crude, essentially trading it for a more reliable Canadian supply. So shippers lined up behind the project that made the most sense — Keystone XL — and the other pipeline proposals were shelved. Now that Keystone XL is facing formidable opposition, TransCanada’s competitors are dusting off old proposals, and coming up with new ones.

The following graphic summarizes a number of the pipeline projects that are currently being planned or built in the US and Canada. 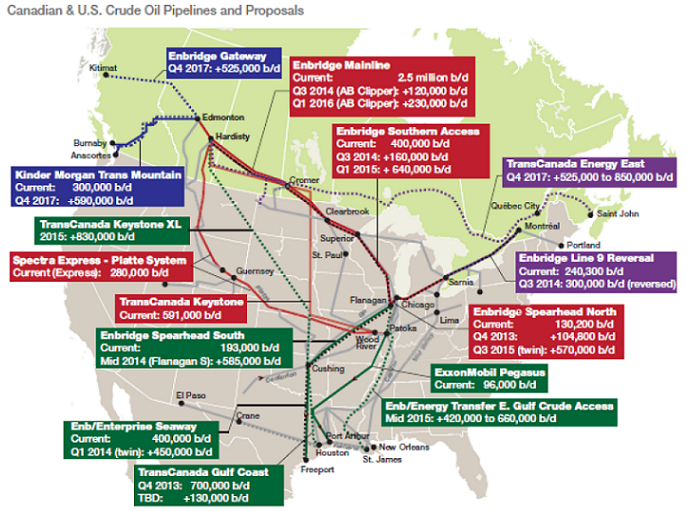 I want to talk about two proposals, which became much more important to the Canadian government once Keystone XL project delays began, and it became uncertain as to whether the project would get US approval. One of the pipeline projects would carry bitumen east from Alberta, and the other would carry it west. TransCanada’s Energy East pipeline would be a 4,500-kilometer pipeline that would carry 1.1-million barrels of crude oil per day from Alberta and Saskatchewan to refineries in Eastern Canada.

The Energy East pipeline project involves converting an existing natural gas pipeline to an oil transportation pipeline, constructing new pipelines in Alberta, Saskatchewan, Manitoba, Eastern Ontario, Quebec and New Brunswick to link up with the converted pipeline, and then constructing the associated facilities, pump stations and tank terminals required to move crude oil from Alberta to Quebec and New Brunswick, including marine facilities that enable access to other markets by ship.

This project alone would be nearly 50 percent larger than Keystone XL, and would still give Alberta’s bitumen access to Gulf Coast refineries by allowing the oil to be loaded on ships on Canada’s East Coast and transported down. The pipeline is expected to be in service to Quebec by 2017 and to New Brunswick by 2018. A recent open season for the project received over 900,000 bpd in shipping commitments for 20 years.

Kinder Morgan Energy Partners’ (NYSE: KMP) Trans Mountain pipeline expansion project would increase the current capacity of the 300,000 bpd Trans Mountain pipeline that connects Alberta to Canada’s west coast. The expansion of the current pipeline would be along the existing right-of-way, greatly simplifying the environmental permitting for the project. The project would nearly triple the existing pipeline capacity to 890,000 bpd, and would terminate in Burnaby, British Columbia. To date 710,000 bpd in shipping commitments have already been obtained. The pipeline is scheduled to begin construction in 2016 with incremental product online in 2017. This project would greatly increase the access of Alberta’s oil sands producers to the lucrative and growing markets of Asia.

Neither pipeline requires US approval, both pipelines face far fewer obstacles than the Northern Gateway pipeline, and they give Alberta’s oil access to both coasts. Mark my words, while there will be opposition, these pipelines will get built. After all, if you put yourself in the shoes of the Canadian government, they certainly don’t want fickle US politics to threaten one of Canada’s highest priorities: development of the country’s 183 billion barrels of bitumen reserves.

Then of course there is the rail option. As I have pointed out many times, railroads essentially built a Keystone XL on rails in about 3 years to transport oil from the Bakken oil fields in North Dakota. Why? Because there was insufficient pipeline capacity to get growing oil supplies from the Bakken to world markets where the crude commanded premium prices. It wasn’t that there was anything special about Bakken crude that allowed it be transported by rail. It’s just that the price differentials were high, the railroads saw an opportunity, and oil producers were more than willing to pay the price to get their crude to distant markets. 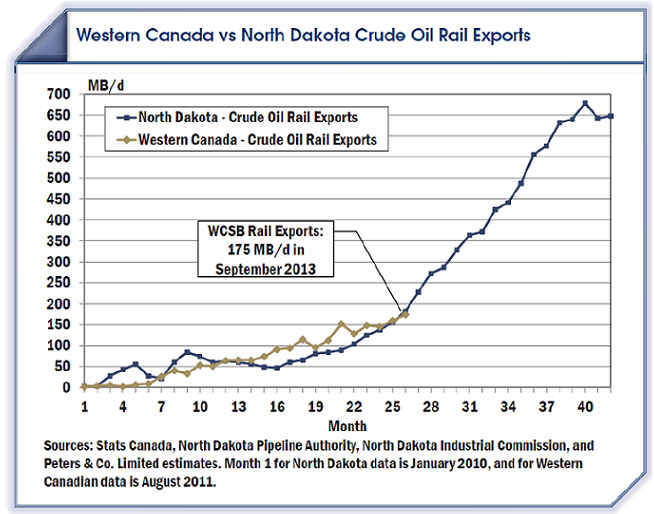 The same thing is beginning to happen with Alberta bitumen. This crude is significantly discounted from global markets, and as a result there is a lot of incentive for shippers to get the oil to market. Whether oil-by-rail continues to ramp up at the same pace as in the Bakken — which has been the case thus far — will be a simple function of whether the price differentials remain high and the pipeline options insufficient.

Recently, 175,000 bpd of Western Canada’s crude was being exported by rail, out of the current maximum operational capacity of 224,000 bpd. 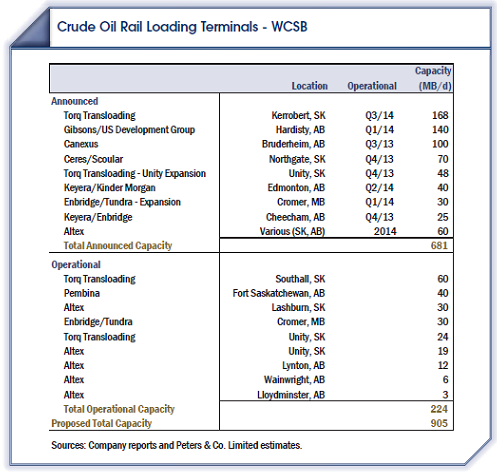 But the rail projects on the drawing board would push the rail capacity up to over 900,000 bpd. Along with the announced pipeline projects, the total capacity would cover expected oil sands production increases for several more years — even without Keystone XL. In fact, it is safe to say that not all of the projects will be built because that would create too much capacity to the ultimate cost of pipeline companies and rail operators.

One thing is certain, though. The future of the oil sands doesn’t hinge on whether Keystone XL is approved. Environmental organizations that argue otherwise are fooling themselves and their supporters.