Down and Dirty With Fossil Fuels

When it comes to our supply of energy, there is truly no such thing as a free lunch. But just what is the real price we pay, and how does the cost compare with the value we receive? Today, I provide a rundown of the world’s top three sources of energy, looking at some of the pros and cons of each. I will also list some of the major publicly traded companies that provide each energy source. Next week I will look at the energy options beyond the top three, including nuclear power and renewables.

Because fossil fuels exist in large, energy-dense deposits, the world has become highly reliant on them as primary sources of energy. In 2013, fossil fuels accounted for 87% of the world’s primary energy consumption, according to the  2014 BP Statistical Review of World Energy. The three most widely consumed energy sources in the world were all fossil fuels; petroleum, coal, and natural gas, in that order.

Petroleum is the world’s first choice for energy with good reason. It is unmatched by any other commercially available liquid fuel at large scale, offering unparalleled value and convenience to motorists. Because of its high energy density, petroleum powers more than 90% of the global transportation system. Oil is also a primary feedstock for the plastics and petrochemicals industry. We are surrounded by articles produced from oil and transported by oil.

Second, while US oil production is booming and US oil imports are declining, the US has not been self-sufficient in oil production since the 1940s. This has resulted in enormous transfers of wealth to countries that, in many cases, have interests directly opposed to those of the US. When oil prices spike, so does the cash flowing out of the country to pay for oil exports. It’s possible to see US dependence on foreign crude as a risk to national security.

Globally, the national oil companies of major oil-exporting nations make up six of the top 10 largest oil companies by volume produced. Saudi Aramco is by far the largest of them all, followed by Russian firm Gazprom and the National Iranian Oil Company. ExxonMobil (NYSE: XOM) is the fourth largest integrated oil company in the world, while ConocoPhillips (NYSE: COP) is the world’s largest independent pure-play exploration & production company.

Starting in the second half of the 18th century, cheap and abundant supplies of coal ushered in the Industrial Revolution, which resulted in large-scale industrial production and a huge expansion of employment. Today, more than 40% of the world’s electricity is generated from burning coal, by far the largest share of any fuel for electricity production. By providing affordable electricity for a large proportion of the world’s population, coal has improved the living standard for billions around the globe.

But coal is even dirtier than oil. Per ton of oil equivalent consumed, coal emits about 30% more carbon dioxide, as well as sulfur dioxide, nitrogen oxides and mercury compounds. Increased coal consumption — particularly in the Asia Pacific region — is the single largest driver of rising global carbon dioxide emissions. 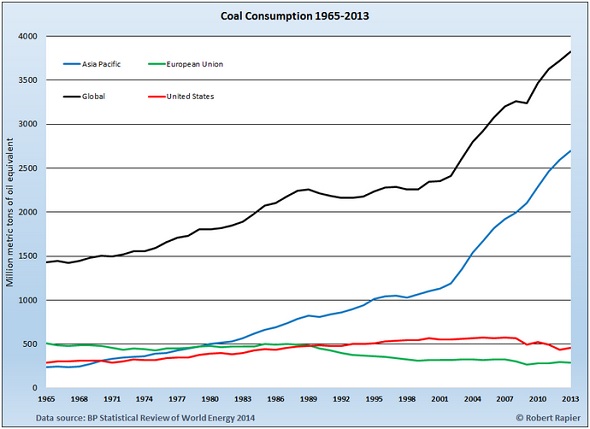 Environmental impacts of coal consumption became readily apparent in the 18th century as the air quality in England’s cities diminished. Even in the modern era, coal pollution is cited as a cause of premature deaths in major cities in developed countries. While stricter laws have greatly reduced air pollution from coal in much of the developed world, many cities in China are still plagued by air pollution from coal-fired power plants.

Coal mining is also a highly dangerous occupation in certain countries. In the US, more than 100,000 coal miners were killed in accidents during the 20th century, while many others suffered from long-term illnesses as a result of breathing coal dust. The fatality rate in the US has fallen dramatically in recent years as a result of improvements in technology and stricter safety standards, but globally the number of annual fatalities remains high. In China, for example, thousands of miners are killed on the job each year.

Coal mining also scars the landscape. In recent years, the practice of mountaintop removal has come under criticism. This practice sometimes involves dumping the mountaintop overlying a coal seam into neighboring valleys, which can bury streams and change the hydrology of the area. Studies have documented that this practice can lead to increased flooding of downstream areas and a degradation of downstream water quality.

China dominates global coal production, producing 47% of the world’s coal in 2013 and consuming just over 50%. Even so, Chinese coal companies have not managed to escape the market carnage experienced by major US coal producers like Peabody Energy (NYSE: BTU) and Arch Coal (NYSE: ACI), which have seen their share prices decline by 80% and 90% respectively since early 2011. For instance, the stock of major Chinese coal producer Yanzhou Coal Mining (NYSE: YZC), has also dropped nearly 80% since 2011.

Natural gas is the cleanest of fossil fuels when burned, because it contains a much higher percentage of hydrogen than coal or oil. The hydrogen portion of the molecule ends up as water when it is burned. As a result, natural gas produces only about half as much carbon dioxide as coal per unit of electricity produced.

Natural gas is used for power production, heating homes, cooking and water heating, as transportation fuel, and as a feedstock for the petrochemical industry. Most of the hydrogen produced in the world is made from natural gas, which is also the main input in the production of fertilizer.

But even though the emissions from burning natural gas are lower than those for oil or coal, it is still a fossil fuel and does produce carbon dioxide when burned. Further, methane — the predominant component of natural gas — is a much stronger greenhouse gas than is carbon dioxide. This means that natural gas that leaks to the atmosphere during production or in transit to customers worsens the greenhouse gas impact. In fact, some studies have suggested that natural gas is actually worse overall than coal because of these leaks. (Most studies conclude that the leaks are relatively small, and therefore there is in fact a net greenhouse gas benefit in switching from coal to natural gas.)

The practice of hydraulic fracturing (fracking) has also raised questions about the effect of natural gas production on its immediate environment. Fracking involves pumping water, chemicals, and a proppant (typically sand) down an oil or gas well under high pressure to break open channels in the reservoir rock.

The 2010 documentary Gasland fanned the flames of fear regarding the risk from fracking to water supplies. However, fracking has been applied more than 1 million times in the US, and is carried out on some 60% of all oil and gas wells drilled in the world. The thousands of layers of solid rock that generally separate aquifers from production zones where fracking takes place present a formidable barrier against migration of fracking fluids. The US Environmental Protection Agency (EPA) administrator has testified that the agency is unaware of any incidents of water contamination caused by fracking.

There have been some cases of water contamination in which fracking had been suspected as the cause, but last week a two-year federal study concluded that fracking was not responsible for the water contamination. Instead, defects in well integrity were in some cases to blame. Nevertheless, whether contamination was caused by the actual act of fracking or by leakage from a well passing through an aquifer, the study acknowledges that natural gas production poses some risk to water supplies.

There are also strong indications that the reinjection of wastewater into the ground following the fracking process can cause earthquakes. Several studies have pointed to a direct link between an increase in fracking in an area and the rise in the prevalence of earthquakes. Prior to the fracking boom, Oklahoma averaged one earthquake a year with a magnitude of at least 3 on the Richter scale. During the first half of 2014, Oklahoma had 258 earthquakes in that range, nearly twice as many as California.

Fossil fuels continue to dominate the global energy trade, but their convenience comes at a cost that isn’t always reflected in the price consumers pay. But this is true even for renewable energy. There are always trade-offs between price, convenience and external costs. Next week I will examine the benefits and drawbacks of nuclear power and renewable energy.