Yet another reminder of the sad state of affairs of the nation’s infrastructure: The collapse Monday of a section of the Interstate 75 bridge in Cincinnati that killed one construction worker.

Though crumbling roads, pipes and power grids is a global problem, the U.S. is the best place to invest in infrastructure. This according to two men who should know: Karl Kuchel, chief operating officer, Macquarie Infrastructure Partners, and Mark Weisdorf, founder of Weisdorf Associates and former CEO of J.P. Morgan Infrastructure Investments Group.

These two top bankers laid out the case for the U.S. as the best place for infrastructure investment in a webinar hosted by Privcap Media, which serves private capital investors.

Readers of Global Income Edge know one of our top long-term income investment themes is profits from the huge, rising demand for income-producing infrastructure investments.

There’s a trillion dollars needed for infrastructure investment in the U.S. over the next seven to 10 years, and $400 billion alone will go to regulated utilities, where a large portion will be used for replacing aging coal plants with natural gas power plants, and adding renewable energy sources such as solar and wind. The American Society of Civil Engineers grades the country’s infrastructure a D+.

The need for infrastructure investment has become more pressing in recent years. Weisdorf explained that though he has been speaking to investors around the world about infrastructure for 15 years, the problem has become particularly acute because investment in it stopped as a result of the global financial crisis. I’ve known firsthand about aging infrastructure, having been an adviser on multi-billion dollar energy projects.

The bankers said private investment in infrastructure is surging because many governments don’t have the means to pay for it, and are turning to public/private arrangements with investors. Weisdorf said that over the last two years demand by private investors has increased dramatically because those investors are interested in the income such arrangements generate.

And infrastructure investments have two more things going for them. First, the pool of high-yield investments is shrinking worldwide. And second, infrastructure investments tend not to be linked to the fortunes of the stock and bond markets. This independence means adding them to your portfolio will decrease volatility. These investments are stable because they’re guaranteed by the “public” half of the public/private partnerships, just as muni bonds are backed by the faith and credit of the municipality that issues them.

Weisdorf said stable infrastructure investments have become more attractive to investors given swings in stock markets and low rates on government debt around the world. 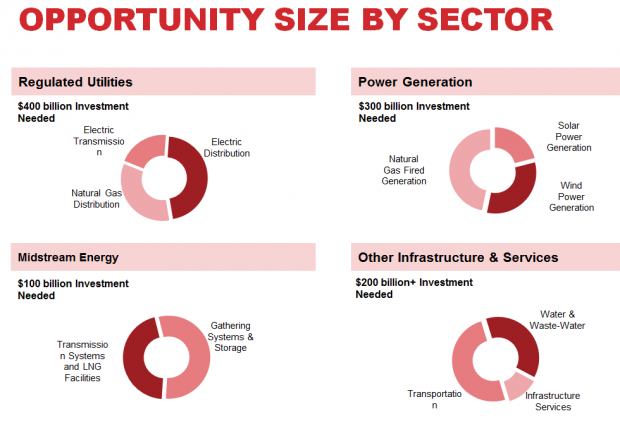 The Case for America

Kuchel noted that U.S. infrastructure is attracting not only U.S. investors, but global investors as well.

That’s why Global Income Edge has developed portfolios that have stakes in the top energy utilities, telecoms and other infrastructure companies around the world.

For subscribers of Global Income Edge, in the next section we profile two new picks that will benefit from the increased investment in U.S. and global infrastructure.