The public certainly does like to gobble up stories about producing fuel from water and/or air. Such stories make the rounds on a regular basis. In fact, I addressed one here in 2012, in Investors Beware of Fuel from Thin Air. But this time around the claim is coming from a very well-known and reputable company.

Last week German car manufacturer Audi (Frankfurt: NSU) announced production of the first batch of synthetic fuel from ingredients found in the atmosphere. I have received a great number of queries about this development, some from investors asking if they should invest in Audi, or whether this is really a game-changer that could be a threat to oil’s dominance in our transportation system. It’s not surprising that investors might suspect that this is a really big deal, given this sampling of headlines:

Audi conjures fuel out of thin air (and water)

Audi invents new fuel that has no carbon foot print

Audi just invented fuel made from CO2 and water

What a gas: Using water and air to run a car

That last two are from Time and CNN Money, respectively; this story is getting a lot of mainstream media attention. So it’s not surprising that investors would be intrigued. Fuel from air and water? That’s sounds like a revolutionary development. An investor may have visions of getting in on something like Google (NASDAQ: GOOG) at the ground floor, with huge upside.

Here is the critical point that nearly all of these articles have failed to note. Carbon dioxide and water are actually the products of combustion, and they exist at a very low energy state. Thus, there is an ingredient in the process that is even more important than carbon dioxide and water. That ingredient is energy, and it’s a very big deal. Why? Because it takes more energy to produce the fuel than you can get back from burning it. That truism comes from one of the fundamental laws of thermodynamics. I worked in Germany for two years and can attest that German engineers are among the best in the world, but they can’t engineer around the laws of thermodynamics.

The press release accompanying the story contained the following graphic, and with that it becomes easy to illustrate what all of the gushing stories have missed: 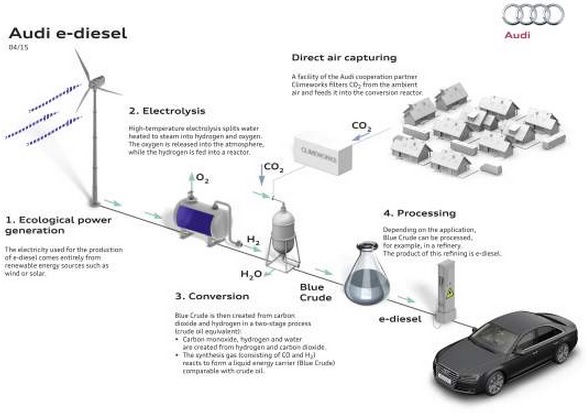 It is certainly true that you can extract carbon from the atmosphere (at great energy expense) and split water into hydrogen and oxygen (again, at great energy expense) and then react them to produce fuel (also at a huge capital cost). But I can also use nothing more than air and water as the raw materials to produce fertilizer, pharmaceuticals, plastics, and even synthetic diamonds. The chemistry is well-understood. I can produce something like ibuprofen out of thin air — but it’s going to be costly because of the cost of the energy inputs.

Here is a way to visualize what the media reports have mostly overlooked. Think of fuel as a rock at the top of a hill. It has a lot of potential energy. Roll the rock down the hill and that potential energy is released. This is similar to burning fuel to create carbon dioxide and water. Now, if you want to turn that carbon dioxide and water back into fuel, you have to carry the rock back up the hill. That takes energy. How much? According to the laws of thermodynamics, it always takes more energy to carry that rock up the hill than you get from rolling it back down. In other words, the process is necessarily an energy sink. It is a dead certainty that more energy is required to produce this fuel than can be released by burning it.

But there are certain cases in which it could make sense to consume more energy to produce a fuel than can be obtained from its combustion. Imagine for a moment that there is a process that takes 10 units of solar energy input to crack water into 1 equivalent unit of hydrogen, which can then be burned for fuel (and which converts the hydrogen back into water in the process). Yes, this would be an energy sink, but one using a nearly limitless source of energy.

This is essentially the claim being made by Audi. By invoking “ecological power generation”, Audi is suggesting it can produce the fuel in a way that is cost effective and carbon neutral. But because the process is an energy sink (another way to say this is that the process produces net negative energy) if fossil fuels are used to generate the required energy their emissions are multiplied. In other words, using fossil fuel inputs in this process would produce more carbon dioxide emissions than just burning the inputs directly for energy.

The press release states that Audi will sell this clean fuel to the public for between 1 and 1.50 euros per liter, “dependent on the cost of renewable electricity.” Diesel in Europe is currently priced at about 1.50 euros per liter, which works out to be $6.37 per gallon at the current exchange rate. I have actually worked through the economics of the process, and even using generous assumptions the true cost of this miracle fuel is going to be at least four times the current spot price of diesel in the U.S. The phrase “dependent on the cost of renewable electricity” appears to mean “if renewable energy were really, really cheap, then we could produce cost-competitive fuel.”

So, while this is interesting research, as is often the case the hype has become disconnected from reality. For investors, it’s always important to be able to distinguish between what’s real and what’s not. Failing to do so can separate you from your hard-earned cash or, far less likely, cause you to miss out on a once-in-a-lifetime investment opportunity. In this particular case, don’t rush out to buy Audi on the basis of this research. This process won’t be displacing a drop of oil any time soon.