My Little MLP: Why Pipelines Are Magic

What can one talk about in Denver at 4:20 on a Friday afternoon after a solid two days of insightful presentations from colleagues? Many things, I’m sure, but I only brought one set of slides to share with the audience at Investing Daily’s annual Wealth Summit. 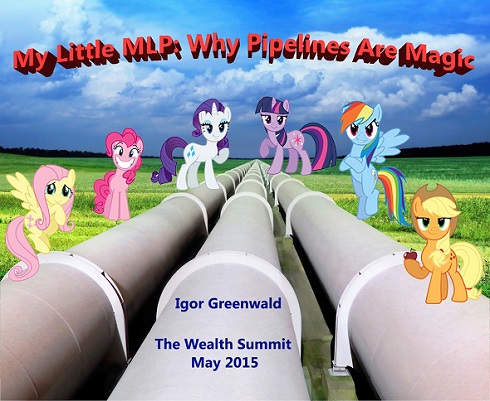 Anyone who’s ever googled the letters MLP knows that they’ve been conclusively claimed by My Little Pony, Hasbro’s hit TV show about young equines with special powers. Master limited partnerships, the tamer focus of MLP Profits, are strictly also-rans in the Internet popularity stakes. 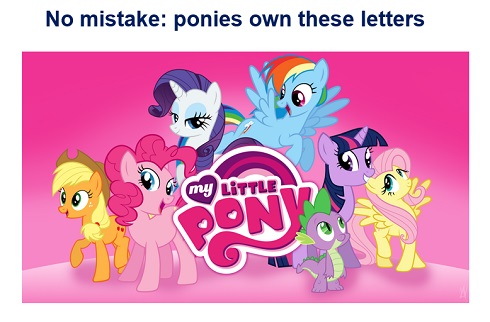 Each pony, pegasus and unicorn represents a different girlhood archtype and a particular virtue. In the course of their adventures in the magic land of Equestria they learn about challenges of friendship and the importance of maintaining harmony. 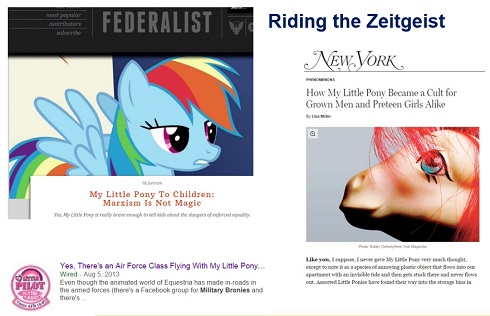 As you can see, the MLP ponies have galloped into the mainstream. Magazines marvel at their broad appeal beyond the targeted preteens, while bloggers ride them into tilts against Marxism. The military now has enough Bronies, as male MLP fans call themselves. to hold conventions and design pony-themed flight patches. 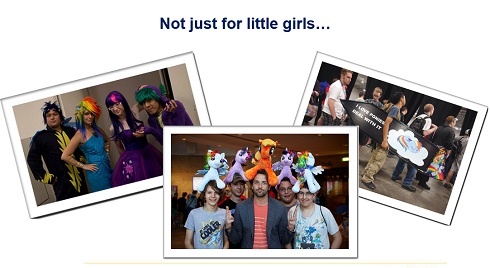 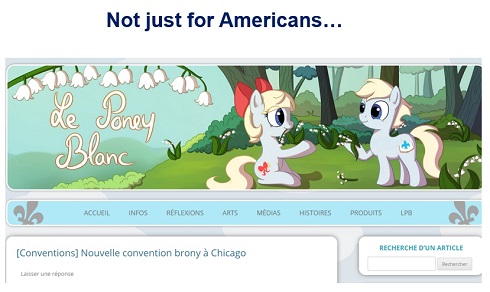 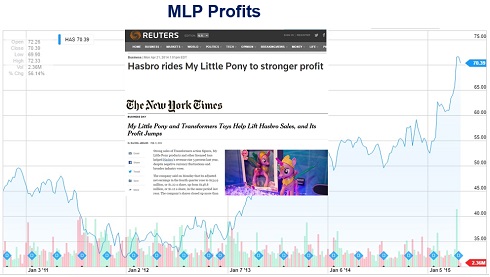 Hasbro has marketed its hit in more than 140 countries and has the sixth season in development. Its share price has almost doubled since the franchise was revived four years ago, with the show getting top billing in media reviews of blockbuster earnings. There’s now a movie in the works. 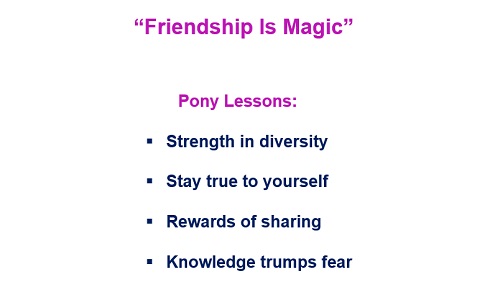 These pony postulates are broadly applicable. 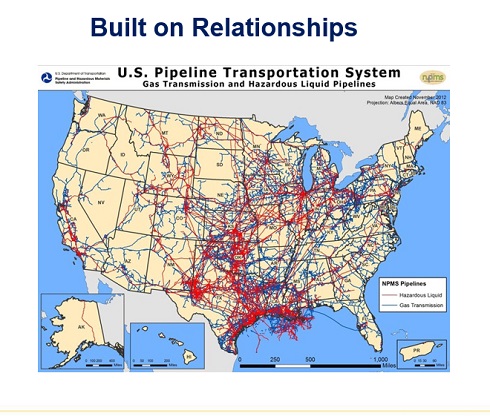 They certainly apply to a U.S. midstream industry built on relationships. Processing and shipping energy for the world’s top producer nation (and an even bigger consumer) is a complicated, messy and interconnected business dependent on diverse groups of shippers and customers at opposite ends of each pipe. 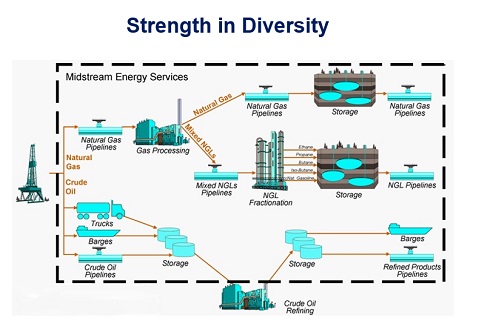 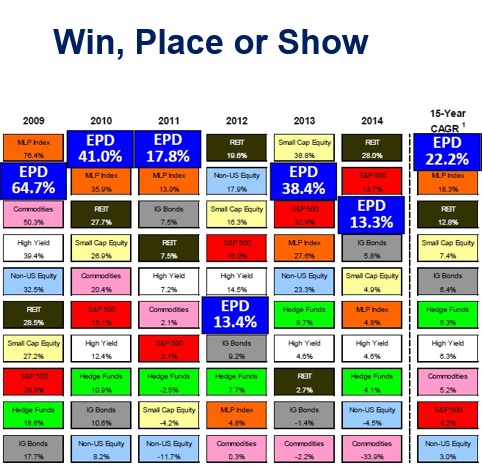 It’s been a rewarding business model: the Alerian MLP Index has produced a compounded annual return of more than 18% since 1999, vs. 4.2% for the S&P 500 over the same span, despite underperforming stocks the last three years. Our top pick Enterprise Products Partners (NYSE: EPD) has done even better than the Alerian. 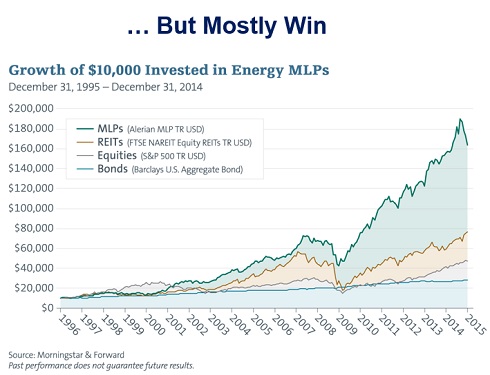 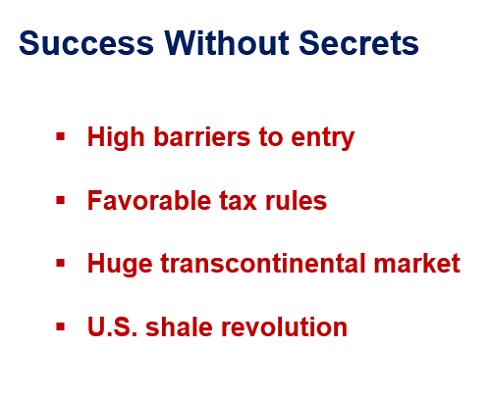 Returns are high because competition is limited, the advantages of incumbents large and the tax benefits generous. Transcontinental shippers can often arbitrage regional differentials in commodity prices. And while pipelines have been hugely profitable since long before shale became a household word, the recent boom in domestic energy production turned midstream into a growth industry. 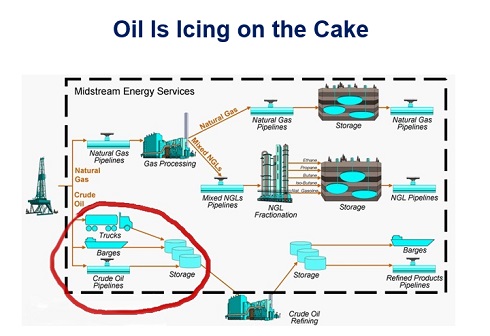 That excitement has worn off fast as oil prices plunged over the last nine months. In fact, crude gathering, transport and storage (circled in red on the schematic above) is a relatively small part of the midstream space, which is dominated by the shipping and processing of natural gas. And while the crude slump has already dragged down the price of natural gas liquids, it’s also strengthened fuel demand, boosting the MLPs involved in refinery logistics and fuel distribution. 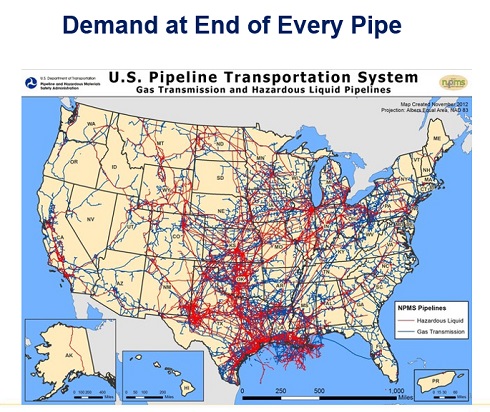 At one end of every pipeline in North America are customers who need the energy whether it’s expensive or cheap, and who were relying on MLPs to deliver it when domestic drilling was still a sunset industry. As indispensable middlemen between producers and consumers, the pipeline operators get their cut so long as the hydrocarbons are flowing, and their fees are subject to regular increases that have tended to outpace inflation. 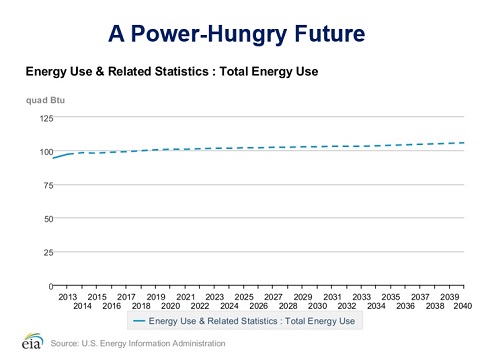 U.S. energy consumption is forecast to increase 9% by 2040, which implies an annual growth rate of just 0.3%. This estimate assumes that transportation fuel demand will actually decline as a result of rising fuel efficiency, and that households will continue to form at a significantly slower rate than was typical before the last recession. Even so, someone will have to deliver some 106 quadrillion British thermal units of energy to end users by then. U.S. energy demand may be growing slowly but it has proven very resilient to economic shocks. The sheer size of the market as well as its rapid technological evolution will continue to create opportunities for shippers and processors. 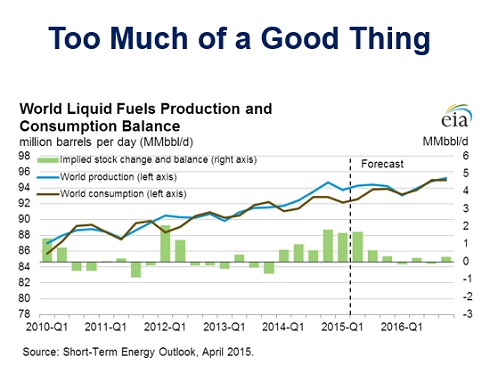 The current crude slump is the result of a supply glut of as much as 2 million barrels per day in excess of demand. Government forecasters expect this imbalance to evaporate over the next year as supply growth falters and demand catches up. 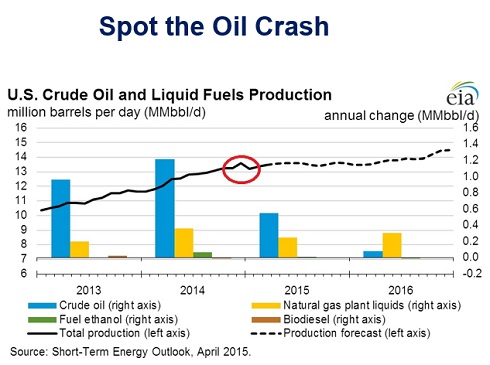 Over a slightly longer timeframe, the U.S. output of oil and liquid fuels is expected to keep growing, sustained by relatively low – and still falling – production costs. That’s great news for the midstream processors who will be counted on to gather, process, ship, refine and distribute the increased volumes for domestic consumption and, increasingly, for export. 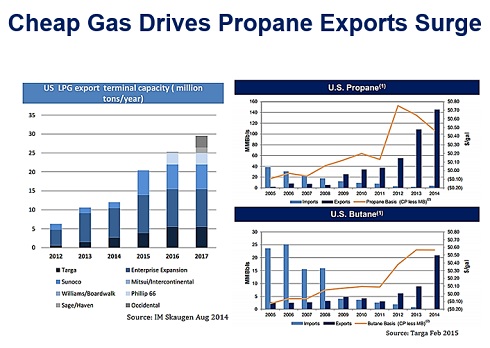 The rising cost advantage of U.S. propane and butane over the benchmark pricing overseas (shown in red above) has tripled U.S. exports of liquefied petroleum gas since 2012, and export volumes are projected to grow another 50% over the next two years. 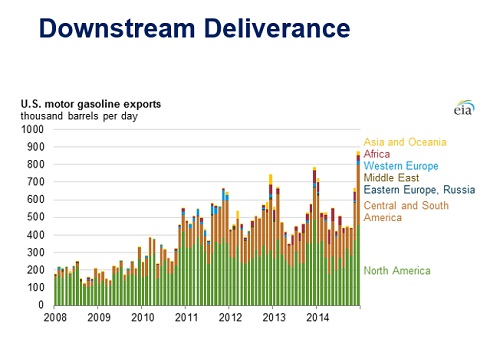 The story has been much the same for booming exports of diesel and gasoline, as U.S. refiners capitalize on heavily discounted crude, cheap natural gas and numerous recent infrastructure upgrades. 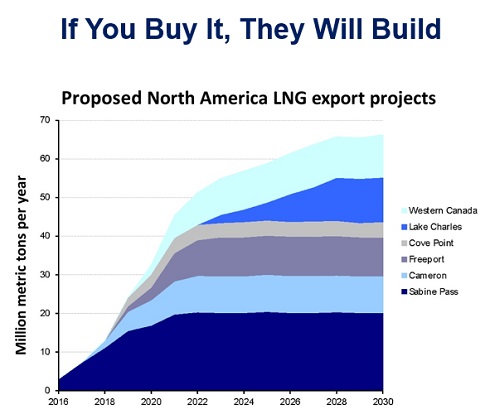 As has already happened with LPG and gasoline, liquefied natural gas exports will be ramping up soon, aided by heavily discounted natural gas from the Marcellus shale. Midstream operators are key logistics players in all these booms, which are encouraging domestic energy producers to keep pumping. 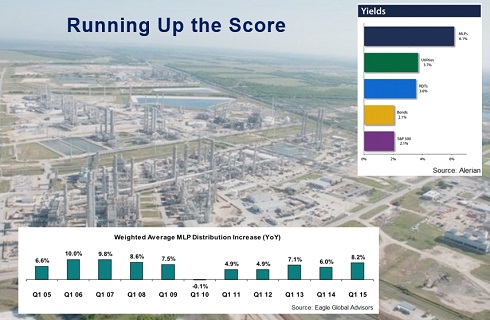 As a result of high domestic production and global demand as well as the recent market weakness, MLP yields are now 65% richer than those on offer from the sector’s nearest competitors among income securities. The MLP Alerian Index has a composite yield above 6%, while utilities and REITs are still well short of 4%. And while a few MLPs have slowed distribution growth others have picked up the pace, so that overall first quarter distribution increases showed the largest year-over-year gain since 2008, by one estimate.

Of course there are plenty of pitfalls in MLP investing as well, and the MLP Profits team gets the most satisfaction from helping subscribers avoid the biggest losers. Last year that meant removing all but one of the upstream partnerships from the portfolio long before they tanked; the year before we recommended selling Boardwalk Pipeline Partners (NYSE: BWP) months before a dramatic distribution cut halved its price.

Our faith in midstream general partners and downstream distributors has been rewarded with dramatic outperformance by our Best Buys so far this year. We’ve also unearthed gains well off the beaten path in recommending partnerships specializing in private equity investments and amusement parks. 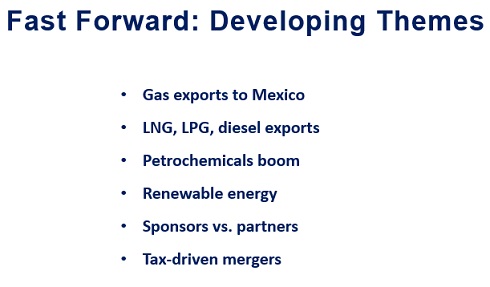 The main themes in MLP investing over the next year will continue to stem from efforts to profitably deploy additional U.S. energy production, whether by exporting more natural gas overseas or by building new petrochemical plants here to take advantage of the glut. Valuations are not slam-dunk cheap despite the prolonged market weakness, but the combination of relatively high tax-deferred yields and exciting growth opportunities remains unmatched. This is a sector that will ride again. 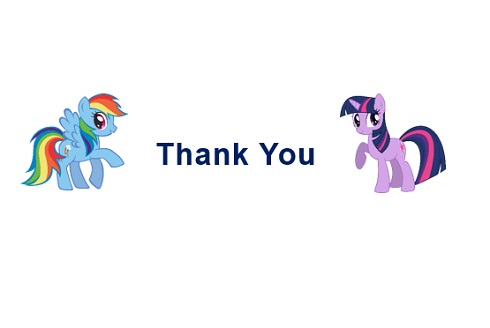