Are We In A Bubble?

A pivotal scene in “The Big Short” has a skeptic scoffing at a quirky money manager who wants to short the housing market. The manager, Dr. Michael Burry (played by Christian Bale), has found portfolios of mortgages rotten with toxic subprime paper.

The U.S. economy is sitting on a massive housing bubble, Burry says. The skeptic, one of his investors, replies, “Actually no one can see a bubble. That’s what makes it a bubble.”

The truth is some people can see bubbles. “The Big Short,” based on the Michael Lewis book, follows a group of managers smart enough to realize how greed, willful ignorance and outright fraud had inflated the U.S. housing market to a ridiculous degree. Of course, when the bubble burst starting in 2007, it crashed the economy in 2008 and nearly sent the world into a depression.

Watching “The Big Short” last weekend reminded me to do one of my periodic bubble checks. Having been burned in the dot.com crash and affected by the real estate crash (though I made it through that one pretty well), it’s become a habit.

Bottom line: There is a bubble, and it’s in corporate bonds.

Before the real estate crash, total corporate debt was around $5.7 trillion (that doesn’t include bank-held debt). Today, thanks mainly to the artificially low interest rates imposed by the Federal Reserve, corporate debt has grown almost 30% to $7.4 trillion.

This chart from Goldman Sachs neatly shows how lower interest rates since the 2008 crash have spurred a rise in debt. 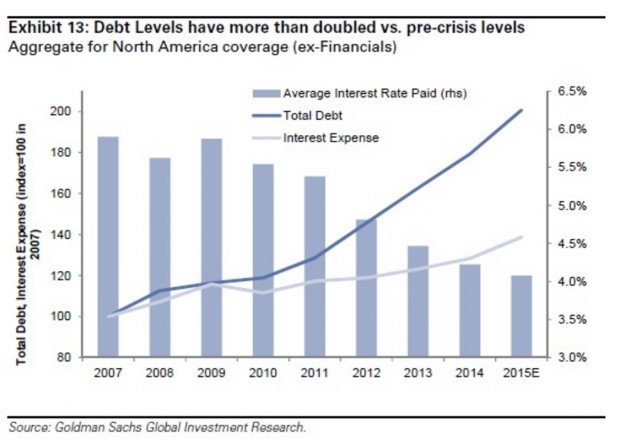 Of course, corporations will borrow like crazy when money is on sale. They can use bonds to finance everything from acquisitions to stock buybacks, and in the process CEOs build their empires and bolster their stock prices. The first fuels CEOs’ egos and the second CEOs’ personal wealth, and the wealth of their stockholders, of course.

An example of bond mania is the Actavis acquisition of Allergan, which closed about a year ago. Actavis helped win its battle with Valeant to buy Allergan by issuing $21 billion of pretty junky bonds (rated BBB-) to help fund the $70 billion deal. The headlines said the acquisition was made with cash and stock, which is technically true, but most of that cash came from the bonds.

So corporate debt is abnormally high, but as long as companies can service that debt, the bubble won’t burst. The question is how likely are mass defaults? Unlike with the housing bubble, the corporate bond situation is relatively transparent. In the housing bubble, murky mortgages were granted to people who couldn’t possibly pay them back, and then that sin was multiplied through derivatives (bets placed on bets, as “The Big Short” illustrated in a memorable casino scene).

So the cracks in the bond bubble would be apparent, and we do see some cracks.

Scary, but not as scary as it sounds given the downgrades were concentrated in the energy and commodities sectors, which you would expect to be in trouble because of weak prices for oil and other raw materials.

If bonds are going to crash, junk bonds will go before investment-grade corporates. The market for junk bonds continues to boom, though. Last year more than $150 billion in junk bonds were sold, twice the amount in 2006. However, economic jitters caused junk bond prices to drop last year for the first time since 2008.

Morningstar reports that on average junk bond funds were down 3.7% last year, and have edged down 0.36% year-to-date. Some analysts say it’s the beginning of a bond implosion, but as long as the economy keeps growing, that’s unlikely. Junk bonds are more sensitive to the economy than high-grade bonds, and with the Federal Reserve seemingly intent on extending our fragile recovery, junk still looks abnormally risky, but not in immediate danger.

What the Bubble Guru Says

When investigating bubbles, I always check with the best prognosticator of bubbles alive today: Robert Shiller, Yale University professor and Nobel Laureate in economics. Shiller called both the dot.com and real estate bubbles, and is the author of many must-read books, including Irrational Exuberance. He’s the reason I kept my real estate exposure low before the crash.

But he was careful to say that high asset prices these days are not a classic bubble. With a classic bubble, people have an “extravagant expectation” about the future. In past bubbles that meant people believing everything from real estate prices rising double digits annually ad infinitum to tulip bulb prices rising exponentially made perfect sense. Shiller says the current market seems more driven by “a tinge of anxiety and insecurity.”

Still, here’s what I read that caused me to breathe a sigh of relief: Shiller says that the bond market “doesn’t seem to crash like the stock market.” Even going back to 1929 when the stock market crashed, contributing to the Great Depression, corporate bonds held up pretty well.

But here’s what’s scary about our bond bubble: When rates eventually rise, bond prices will fall, perhaps precipitously, depending on how high interest rates go. If the economy tanks and bond defaults rise—especially junk defaults—you’ll want to be nowhere near either the junk bond market or the stocks of companies burdened with junk debt.

A healthy fear of the bond bubble is already baked into Personal Finance. You’ll only find the words “high yield” in our mutual fund portfolio with the Vanguard High-Yield Tax Exempt fund (VWAHX). And that’s government high yield, not corporate high yield.

We continue to think that the best way to collect income now is through dividends of strong companies. That’s a strategy we’ll stick to until interest rates return to normal, the bond market shakes out and the bond bubble deflates.