Technical Nuggets: Worries and Portfolio Gains are not Mutually Exclusive

Bull markets climb a wall of worry. And there is plenty to worry about these days, which suggests that stocks could continue to move higher over the next few weeks and perhaps even months.  Yet, there are valid reasons to worry both inside and outside the market, which suggests that the best strategy is to remain invested while keeping an eye on the exit, just in case.

In the July 2, 2016 issue of Technical Nuggets I wrote: “What would be the straw that breaks the bearish case’s back? A huge rally above the 2132 level on the S&P 500 with big volume to the upside, extremely positive money flows, and a show of no doubt in momentum. It could happen.”  And it did happen as the S&P 500 broke out to a new high, but the breakout came on fairly low volume.

So the big question is what’s next? Well, this week’s analysis suggests that what lies ahead is more market volatility as earnings season, two nearby political conventions featuring unpopular and highly polarizing candidates, an upcoming European Central Bank meeting, rising threats of terrorist attacks and a controversial coup attempt in Turkey provide the background for who knows what?  The truth is that none of these things may have an immediate impact on any particular stock, given the low interest rate environment and the lack of investment alternatives, which is not to say that things can’t and won’t eventually change.

I want to follow up on the action in the S&P 500 (SPX) and the Nasdaq 100 Index (NDX), and go over the key points in my requisite list to see if the recent breakout passes muster by focusing on volume and money flows which are the two components of momentum.  A proper breakout to new highs should occur on rising volume with positive On Balance Volume (OBV) and positive Money Flow Index (MFI). 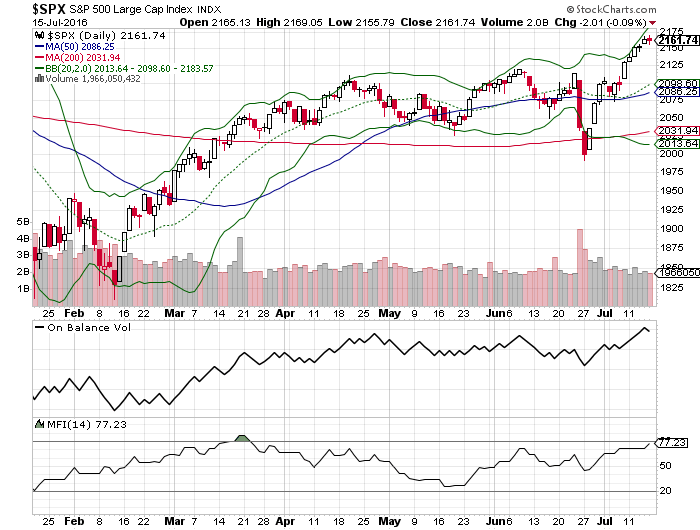 Figure 1 shows the recent action in the S&P 500 which finally broke out above 2132.  And while OBV and MFI are positive (bottom panels), a closer look at the chart shows that after the initial launch of the rally in late June, overall volume fell off as the rally gained steam.  This is usually an indication that the rally is a result of short sellers being forced to buy stock to cover their short positions.  If there was real buying then volume would more likely be surging as the rally gathered steam.  Also notice that on Friday, July 15, the OBV line topped out, which suggests that the buyers were starting to move away from the market. If this is a short covering rally, this type of volume activity would indicate that it’s close to running its course. 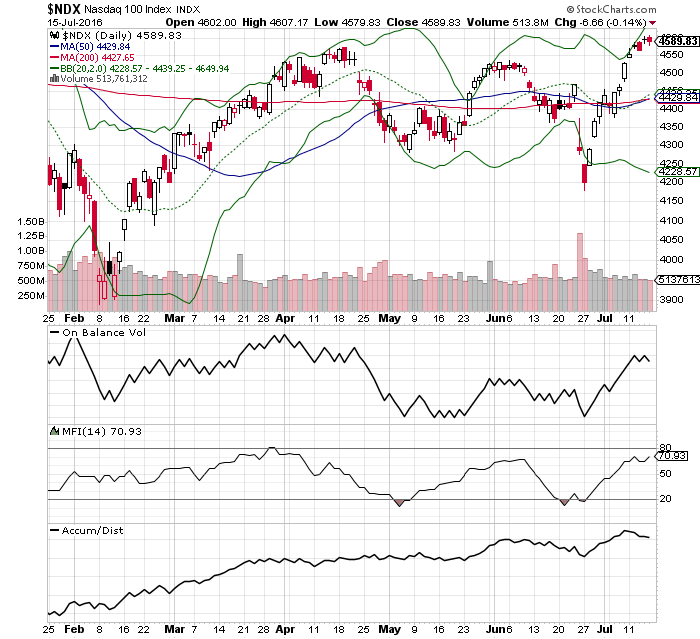 In the second chart the Nasdaq 100 shows a similar pattern to the first chart, but also shows some important differences.  First, the volume analysis is nearly identical to that of the S&P 500, again suggesting that short covering was a significant part of the rally.  Here is where things get interesting, though. The NDX made a new high, but it wasn’t as robust as the new high in the S&P 500.  Second, the OBV line for NDX was much weaker than the OBV line for the S&P 500.  And third, the MFI line is pretty impressive.  Even more interesting is the picture illustrated by the Accumulation-Distribution Line Indicator (ADI), the lowermost panel on the chart, which is falling.  Rallies fueled by money moving into the market that are not confirmed by higher volume or robust OBV tend to be weak.  Furthermore, if the ADI is heading in the opposite direction, something is clearly not right about the situation.  Another way to look at this is that the money moving into the Nasdaq 100 may not be enough to raise the volume needed to make the rally last longer, and this is very cautionary.

I’m not convinced about the viability of this rally but the fact that prices continue to rise is hard to refute.  So here is what I’m worried about and what I believe will eventually bring prices down at some point in the future, if it continues:  The volume and momentum indicators are not showing that this is a new bull market.  Instead, this rally and this breakout looks as if it’s short sellers getting out because they got burned in the last move to the downside.   But that does not mean that investors in winning positions should not continue to follow the uptrend.  In my opinion this is still a market of stocks and not a stock market, and while some stocks may fall others will continue to move higher so the trick is to pick well.  More specifically, investors that are putting their money in broad indexes are more likely to get burned than those who carefully pick out individual stocks.  To be sure, this could change at any time. And if momentum and volume improve, I will turn more positive.

Does this mean that investors should avoid all stocks? No. It just means that careful stock-by-stock fundamental analysis and patience is a better way to go than just looking for the next hot index or sector.    The bottom line is that this market is likely to lurch from crisis to crisis and there are too many external influences that could make for higher levels of volatility than we’ve seen even of late.  The most significant variable is interest rates, which are not likely to rise significantly at any point in the near future barring something pretty extraordinary.   So, it’s a good time to be cautious and to stick to long term investment goals and stock by stock analysis.