RIN and Bear It

Last week I discussed the current woes of the oil refiners (see Swimming in Gasoline.) Very high gasoline inventories and oil prices that rose throughout the spring are the primary culprits behind the sector’s falling margins, but there is one more factor that was alluded to in Valero’s (NYSE: VLO) most recent earnings release. Valero noted that it “incurred $173 million of costs to meet our biofuel blending obligations (primarily for the purchase of Renewable Identification Numbers (“RINs”) in the U.S.)”

What exactly does this mean? And if it was a cost to Valero, who benefited? Let’s do a quick review.

Although ethanol has been in the U.S. fuel supply for decades, Congress gave the additive a huge boost in the Energy Policy Act of 2005. One of the key provisions of the law was the Renewable Fuel Standard (RFS). The RFS required the blending of escalating ethanol volumes into the gasoline supply each year, reaching a minimum of 7.5 billion gallons by 2012.

Ethanol production skyrocketed, so Congress accelerated ethanol adoption with the Energy Independence and Security Act of 2007. The new law required the use of 12 billion gallons of ethanol in the US fuel supply by 2010, rising to 15 billion gallons by 2015.

To track compliance, a renewable identification number – or RIN, system was implemented. Each qualifying volume of biofuel (e.g., 1 gallon of corn ethanol, or its energy equivalent) is tracked by a unique 38-digit serial number as it passes through the supply chain. Ultimately, “obligated parties” – which means those who introduce fuel into the US fuel supply – are required to submit their quota of RINs to the EPA to demonstrate compliance.

There are RINs for several different categories of biofuel, and they are bought and sold to ensure compliance with the RFS. The value of the RIN differs depending on the category of biofuel and its blending mandate. If less fuel is being produced than the mandate, it drives up the price of the RIN and in theory increases the incentive to produce the fuel (which is the intent of the system.)

Here is an example. The D6 RIN covers corn ethanol. At present the value of this RIN is about $0.70, which equates to $0.70 per gallon of corn ethanol produced. That means an obligated party (typically a refiner) can either purchase a gallon of ethanol for ~$1.40 (the current spot price) and receive the RIN, or it could simply purchase the RIN.

One of the features we offer subscribers of The Energy Strategist is a regular update on commodity prices. Here is the table from the most recent issue: 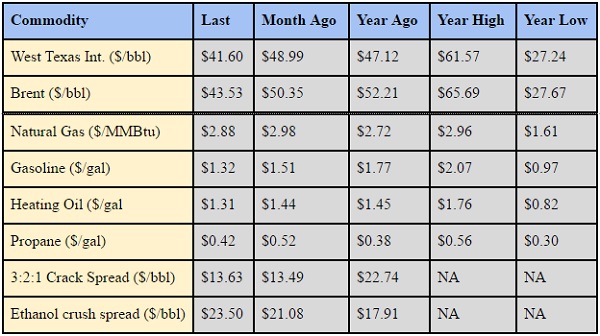 It provides a clear picture of deteriorating refiner margins, represented by the 3:2:1 Crack Spread. At the same time, the table shows that conditions for ethanol producers have been improving, based on the ethanol crush spread. Similar to the crack spread for refiners, this is a margin measure for ethanol producers, calculated on the basis of the input of corn and the output of ethanol and a byproduct called distiller’s dried grains with solubles (DDGS).

I am leery of investing in the ethanol sector given its dependence on government mandates. Investors should also be aware that ethanol industry profits are affected by two commodities, corn and gasoline. Nevertheless, the outlook has been improving for the sector even as it dims for refiners, offering energy investors an additional option provided they understand the unique risks and opportunities.