The Hole in Your Portfolio

But first, a moment of silence; the last issue of our Global Income Edge (GIE) was sent to subscribers earlier today. GIE was a good idea that was well-executed, with index-beating returns and great analysis—it recently was named the top newsletter for financial/investing analytical reporting by our trade group. The idea behind GIE came from its chief strategist, Richard Stavros. Richard had a brilliant, best-of-both-worlds idea: If you want strong, stable income, look to multinational companies that have both the stability of developed markets and the growth of emerging ones.

Our Own Living Legend

As I said, Richard’s returns, especially when you consider the safety of his picks, were strong. Unfortunately, the idea never caught on because I suspect our timing was lousy: When we launched GIE two years ago, we had no idea that so many countries would compete for the title Sick Man of Europe, and that China would turn from global growth engine to a temperamental V-8 that keeps blowing pistons. GIE subscribers will start receiving our excellent Canadian Edge letter, which itself is a rich source of dividends and features a portfolio up 20% so far this year.

Richard will assume a more key role at Investing Daily and take over managing the Income Portfolio of our flagship publication, Personal Finance, starting in September. He’ll bring his award-winning strategy of great returns with high safety to PF, only with a domestic-stock spin.

Richard is a bit of a legend around here for selling master limited partnerships out of the Personal Finance Income Portfolio just before the energy sector collapsed, thereby saving subscribers who followed his advice untold thousands of dollars.  He similarly foresaw and dodged other pitfalls with Global Income Edge holdings. He’s putting the finishing touches on his Income Portfolio strategy now, and I would urge anyone looking for high dividend income and safety to get a PF subscription right now.

But back to emerging markets. In the map below you’ll see the relative growth rates of different world regions, and you’ll note the developed world is at a distinct disadvantage. Over time, stock returns loosely follow economic growth rates. Lately, a number of studies have predicted we can forget 8% to 11% average annual increases in U.S. stocks and should manage our expectations down to a 4% to 6% range. 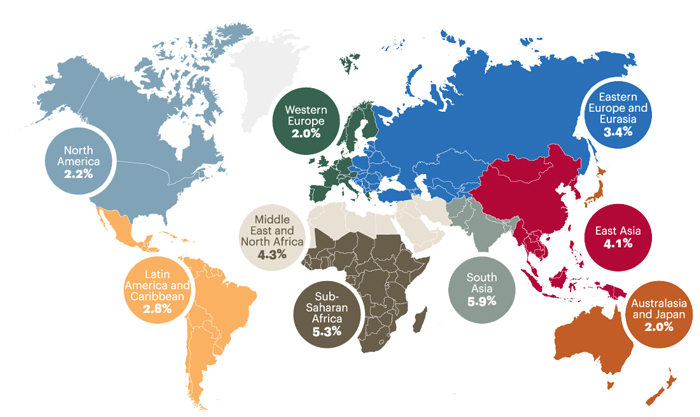 Those somber predictions, though, don’t apply to emerging markets. I know, you may have gotten sick of waiting for them to take off or have been turned off by their volatility. Emerging markets in general, as measured by the MSCI Emerging Markets Index, have been unimpressive over time, with average annualized returns of 3%, 1% and 3.4% in the last one-, five- and 10-year periods, respectively.

But if you invested in emerging markets via a fund that tracks that index, you’ve missed out on much better results that come from funds that pick more selectively from emerging markets. A year ago in Personal Finance we recommended the iShares Edge MSCI Minimum Volatility Emerging Markets ETF (EEMV), which is based on an index that has beaten MSCI Emerging Markets by 4% annually over the trailing 10- and 15-year periods. Year to date it’s up almost 13%.

The fund’s filters end up virtually ignoring holdings in poor-performing countries, such as Russia. It’s a great way to play emerging market growth with less risk.

In GIE we picked some international funds for income, one of which I was so impressed with I ended up investing in it for my own portfolio: Henderson Global Equity Income (HFQAX). Currently, it yields 6.25%, and its five-year average annualized return is almost 9%, according to Morningstar, which awards the fund its maximum five stars. Henderson Global does have a developed-market bias but also takes advantage of growth in emerging markets, just as GIE did. (If you’re interested in the fund, know that it comes with a 5.75% front end load, though it’s often waved depending on which brokerage you use.)

The world is starting to see the advantage of emerging markets again. Recently, the Institute of International Finance reported that money flowing into emerging markets—both debt and equity—reached $24.8 billion in July, up $13.3 billion in June. That’s a huge increase by historical standards. There’s still time to hop aboard for big gains, I believe.

So while we have you covered in blue chip growth and income in Personal Finance, with top analysts Jim Pearce and now Richard Stavros captaining our Growth and Income portfolios, please reserve a portion of your portfolio for emerging markets.