Regardless of what you might think about Cuba’s politics, thawing U.S.-Cuban relations are creating the potential for big profits from the island.

For the first time since 1961, JetBlue flew a scheduled flight between the U.S. and Cuba this week. The last time that happened, passenger planes still had propellers, people still dressed their best to fly and you could smoke on planes. That’s just the latest development in thawing U.S.-Cuba relations, which have included a state visit from President Obama and a reopened U.S. embassy in Washington.

Cuba may seem economically inconsequential, but with 11 million citizens it is the most populous country in the Caribbean. It also has a literacy rate higher than our own and its economy has been growing at a rapid clip, posting GDP growth of 4.7% in the last half of 2015. And despite tales of grinding poverty, with GDP per capita of better than $10,000 it is wealthier than many other developing countries, including India and Vietnam, despite decades of American sanctions.

American investors are anxious to salsa in the streets of Havana. Unfortunately, thanks to its communist government and the state-ownership of most enterprises, Cuba doesn’t have a stock market. Still, there are ways to profit from Cuba once again opening its doors to Americans.

One of the easiest would be to buy shares of Copa Holdings (NYSE: CPA), a leading Latin American airlines. Based in Panama, it’s hardly a fly-by-night operation with a market capitalization of more than $3 billion. It also already operates regularly scheduled service to Cuba and will definitely benefit from the surge in Cuban growth that American investment should create. The shares also yield about 2.7%, so you can get paid as you wait for things to really take off.

If your broker allows you to trade on Canadian exchanges, Sherritt International (TSX: S) is a miner which already has extensive operations on the island. Through a partnership with the General Nickel Company of Cuba, Sherritt mines and refines nickel in Cuba and is also exploring for and developing local oil and gas reserves. Like Copa it’s not a pure play on Cuba though, with operations in Canada, Madagascar, Spain and Pakistan, but nearly 60% of its revenue comes from the island.  It’s a risky bet though, with a market cap of just $235 million and it has been hard hit by the decline in commodity prices.

Probably the easiest way to bet on Cuba is the Herzfeld Caribbean Basin Fund (NSDQ: CUBA). A closed-end fund, it holds a basket of 56 stocks likely to benefit from a resurgence of American investment in Cuba, ranging from cruise lines and airlines to banks and infrastructure companies. Keep in mind that the fund is small and it typically 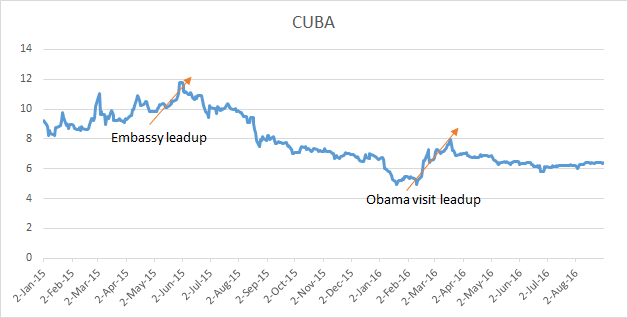 only trades about 20,000 shares a day. That said, it tends to make big moves on any news about U.S.-Cuban relations. And right now it’s trading at a 7.7% discount to its net asset value, meaning its share price is lower than the value of the stocks the fund holds. It has typically traded at a nearly 3% premium over the past three years, so this looks like a terrific entry point.

Granted, something might yet derail our increasingly cozy relationship with our island neighbor and that would certainly ding all three of these stocks. But if things keep moving in the right direction, I expect they’ll all move up as Cuba benefits from growing U.S. investment.

Benjamin Shepherd is a recognized exchange-traded fund (ETF), mutual fund and stock expert with an extensive background analyzing time-tested funds, including their managers and strategies. Ben looks for investments that have proven themselves in both bull and bear markets. Ben also specializes in covering emerging markets, pinpointing the most dynamic investments in developing nations for market-beating growth.