How the Ethanol Sausage Gets Made

Permit me to engage in a bit of shameless self-promotion. If you are interested in U.S. ethanol policy, consider watching a new PBS documentary called The Ethanol Effect. It debuted just this week on PBS World, but should be distributed to local PBS channels shortly. The video is currently available online, here.

The documentary is hosted by former Scientific American energy and environment editor David Biello, who came to my office in Arizona to interview me for the program last April. I come on just before the 48-minute mark, discussing progress in cellulosic ethanol. Here is a screen capture from the program: 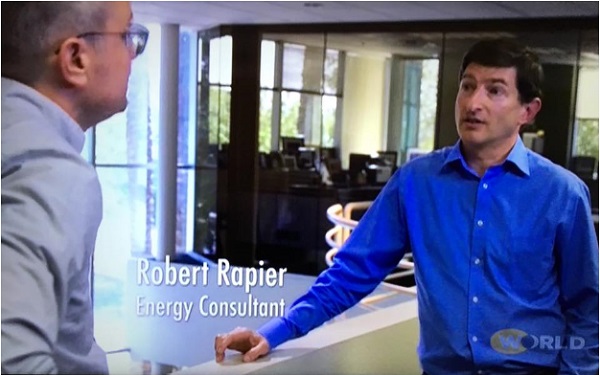 The video is very well done. It traces the history of U.S. ethanol policy, and does a good job of covering the political and environmental issues involved. There are some issues that readers outside of the corn belt may not even be aware of, such as the heavy fertilizer, pesticide, and herbicide runoff from industrial corn farming that is making it a challenge to provide clean drinking water for some parts of the Midwest.

The program describes the rationale for the enactment of the Renewable Fuel Standard, which mandates that ethanol make up about 10% of the U.S. gasoline supply. This controversial policy was always highly politicised, and if you follow the lobbying strategies of the ethanol lobby as shown in the film, you will understand why I rarely recommend ethanol stocks. While there are certainly plenty of entrepreneurs within the industry, the policy framework is anything but  entrepreneurial. Rather, you will see time and again attempts to force ethanol onto consumers, rather than to organically grow market share.

Indeed, the ethanol industry blames its current stagnation on government’s failure to further increase ethanol mandates. That’s easier than growing their own markets for E85 (a blend of 85% ethanol and 15% gasoline), for which the potential demand is far beyond what ethanol producers could currently satisfy.

On another topic, if you happen to be in the Dallas area next week, I will be giving a short talk at the The MoneyShow Dallas on Oct. 19. I will be providing a broad overview of the world oil markets, detail some of this year’s big winners in our portfolios at The Energy Strategist and MLP Profits, and then talk a little about what I do in my day job as an energy engineer. I will be there from the evening of the 18th through midday on the 20th, so if you happen to be nearby please stop in and say hello.