3 Funds to Own, When There’s Blood in the Streets

“The time to buy is when there’s blood in the streets.” Attributed to the 18th century financier Baron Rothschild, this often repeated phrase means that investors in the midst of a market panic should seek inherently strong stocks that have been unfairly driven down in price by the irrational fear of the crowd.

As we face a new year, signs are emerging that a stock market bloodbath lies ahead. If carnage suddenly hit Wall Street, would you be prepared? Below, I pinpoint three exchange-traded funds (ETFs) that you can buy now, to protect your wealth in case of a market crash.

I’ll examine these funds in a minute. But first, let’s look at the risks ahead.

A day of reckoning…

“According to LPL Financial, it has been nearly three years since the end of a period culminating in a double-digit drop for the S&P 500. Since 1980, only three periods have gone longer without such a decline.”

The broader indexes in recent days have hit new highs, but as this ancient bull market approaches its eighth year, stocks are a bubble in search of a pin.

The Federal Reserve could be on the verge of supplying this pin. The Fed meets today and it’s likely to announce a hike in interest rates.

And consider this: The last time the Fed raised rates, on December 15, 2015, the markets plunged by 8% over the next month.

It’s not just higher interest rates that pose a risk. Rising geopolitical tensions, an emboldened Russia, overly indebted banks, a disintegrating European Union — several challenges now threaten to usher in a bear market (a downturn of 20% or more over at least a two-month period). That spells doom for over-hyped stocks.

Meanwhile, America is bracing for the inauguration on January 20 of a mercurial and inexperienced new president who lost the popular vote by more than 2.8 million ballots.

Whether you love or hate Donald Trump, you can’t deny that his presidency will put the world on edge. The conservative and widely influential magazine The Economist this year listed a Trump presidency as one of its “Top 10” global risks.

In the context of this uncertainty, you either can flee to safety (and receive dismal returns), do nothing (and get slaughtered), or be proactive and take decisive measures to simultaneously hedge your portfolio and profit. 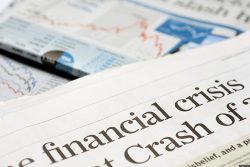 Below are three aggressive ways to prepare for a financial crisis:

This ETF focuses on U.S. based, mid- and large-cap stocks with low earnings quality, regardless of their brand name or favor on Wall Street. To find these dangerous stocks, HDGE managers scrutinize the income statements to uncover hidden vulnerabilities.

After pinpointing equities with particularly weak fundamentals, the fund shorts them. With net assets of $184.52 million, HDGE loads up on the very stocks that tend to fall the hardest in a bear market. A top holding is Deutsche Bank (NYSE: DB), which has been grappling with high debt. Caveat: The fund’s expense ratio is a bit high, at 1.63%.

With $2 billion in assets, the ProShares Short S&P500 follows a simpler but still effective game plan: it seeks to match the inverse of the daily performance of the S&P 500. As such, it’s a broad method for shorting the U.S. stock market as a whole.

If you’re pessimistic about the prospects of overseas stocks and their respective regions or markets, this ETF lets you bet against the MSCI EAFE index, one of the most common international equity indexes.

As armed strife and unsustainable sovereign debt continue to bedevil markets in the Middle East, Russia and the euro zone, EFZ allows you to profit by seeking a daily performance that’s the inverse of the MSCI EAFE.

With net assets of $84.51 million, the ProShares Short MSCI EAFE ETF is a bet that mounting international crises won’t get better anytime soon. The index has over 60% exposure to stocks in Europe, which was rattled this month when a referendum for constitutional reform in Italy was voted down. Expense ratio: 0.95%.

Got a question or a topic you’d like covered? Send me an email: mailbag@investingdaily.com — John Persinos

In these perilous times, with a bear market possibly looming, it’s hard to say if the same old investing methods will work. They may work fine in a bull market, but they often let you down when the market crashes.

Our analysts have looked at the performance data and discovered that this system, called the Rapid Profits Matrix, has beaten a buy-and-hold strategy by up to 4.9 times in head-to-head competition. Best of all, it does it buying and selling normal stocks. There’s also no need to deal with more complex instruments like options. Learn more about Jim’s new program here.