My strongest convictions each year generally manifest themselves in the predictions I make each January. This year I made five (see “Hot Year in Store for Energy”), including two calls I felt particularly strongly about.

The first was that the Dakota Access Pipeline would be completed this year, and oil would flow through the line. During the last week of January, President Trump signed a directive instructing the Secretary of the Army to expedite the project, which had been stalled in the waning days of the Obama Administration. On Feb. 7. the Army canceled plans to conduct a lengthy environmental review that had been announced in December and notified Congress it would grant an easement to Dakota Access for the Lake Oahe crossing — the last approval needed to complete the pipeline.

Energy Transfer Partners (NYSE: ETP), the partnership building the $3.8 billion pipeline on behalf of a consortium of energy companies, immediately began work on its final, controversial segment. The company now expects oil to flow through the pipeline before summer.

Energy Transfer has taken a public relations beating over this project, so it recently released a couple of graphics seeking to correct the frequently misstated record. The first of these shows that the pipeline will be laid under the lake far below other pipelines that cross it. This is meant to alleviate concerns that the pipeline will leak and contaminate the water.

Not pictured here is the BNSF rail bridge just a few miles upstream used by crude-laden rail cars, a far riskier proposition than the pipeline.

The second graphic addresses a common misconception among many people I speak with, and that is that Energy Transfer is trying to build this pipeline across the reservation of the Standing Rock Sioux, the tribe that’s led the opposition to the pipeline. Not true. In fact Dakota Access has been built almost exclusively on private property, and follows existing right-of-ways through the contested area: 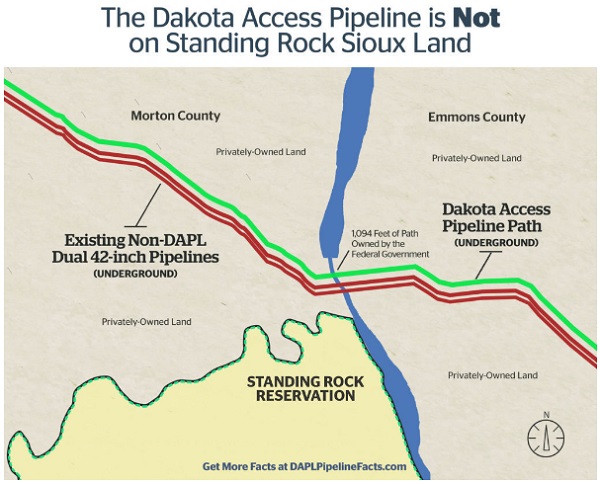 Energy Transfer investors have mostly shrugged off the recent progress on the pipeline. While the stock has rallied nearly 9% so far this year, that’s just barely ahead of the benchmark midstream energy index. Which brings me to my second strong conviction.

Energy stocks surged in 2015, but the master limited partnerships (MLPs) still common in the midstream sector mostly lagged that surge. I expect them to make up ground this year. This conviction produced a pretty aggressive prediction of a 20% total return in 2017 for the Alerian MLP Index.

How are we doing so far? Six weeks into the year, the AMZ has returned 6.9%. More impressively, there are now 37 MLPs that have returned double digits on the year, led by Southcross Energy Partners (NYSE: SXE) and its 67% year-to-date return. Over the past 12 months, this small midstream that currently makes no distributions is up an astounding 359%.

But that’s not even good enough for for first place over the past 12 months. That distinction belongs to hydraulic fracturing sand producer Emerge Energy Services (NYSE: EMES), with a 12-month return of 464%. A year ago the outlook was bleak after Emerge twice slashed and ultimately suspended its distribution in response to weaker demand.

But those are only 2 of the 40 MLPs that are up by triple digits over the past year. In fact, the “laggards” at this point are some of the larger MLPs that happen to make up the bulk of the  Alerian MLP Index. For example, Enterprise Products Partners (NYSE: EPD), the largest Alerian component, is up “only” 40% in the past 12 months.

This is shaping up as another good year in the MLP sector. Make sure you profit from it. Join us at MLP Profits, where we have a portfolio to suit every investment style.

I would also like to invite subscribers to join me, my colleague Igor Greenwald and the rest of the Investing Daily team at our exclusive Investing Summit on April 6-7 in Old Town Alexandria, Virginia. We will discuss our best investment ideas for 2017, so reserve your seat now.