With the rise of renewables, batteries are crucial to overcoming the intermittency of wind and sunlight. And as utility investors, we’d love to get a piece of the action.

But for risk-averse income investors, betting on new technologies is best left to those who can afford to be wrong—venture capitalists and other deep-pocketed investors. That’s because at the outset of any technological revolution, it’s nearly impossible to know which technology will end up becoming the industry standard.

Naturally, the successes get all the attention, while the dozens of failures and also-rans (cough … A123 Systems … cough) are largely forgotten. Such triumphant narratives make it seem easy to pick winners and losers in nascent industries, even though many investors end up getting burned.

At this point, most investors are likely familiar with billionaire Elon Musk’s Tesla Inc. (NSDQ: TSLA), which adapted the battery it developed for its electric cars for use in residential and utility-scale applications.

Certainly, Tesla looks like it could be a long-term winner. And it probably helps that the media’s fascination with Musk—and his savvy at exploiting it—gives Tesla an air of inevitability.

Tesla’s vaunted Gigafactory, which recently commenced operations, is expected to double the world’s production capacity for lithium-ion batteries by 2018.

However, the $45.3 billion company’s primary focus is still electric cars, which accounted for about 90% of sales last year. Initially, Tesla’s new factory will be working toward creating enough batteries to meet ambitious production targets for its launch of the Model 3, a more affordable car that it hopes will make electric vehicles go mainstream.

Meanwhile, Tesla is still in heavy investment mode, and analysts don’t expect the firm to become profitable until 2019. Though it’s not all that unusual for relatively young firms at the vanguard of a new technology to have such ugly finances, that doesn’t mean we should overlook the situation either.

Of course, Tesla isn’t the only major player in the battery industry. Until recently, in fact, the incumbents were Asian tech and chemical giants such as Samsung Electronics Co. Ltd. and LG Chem Ltd. Unfortunately for investors hoping to find a pure-play, batteries are just one of a number of potential profit drivers at these diversified companies.

So let’s take the picks-and-shovels approach one step further by focusing on the makers of one of the key ingredients for utility-scale batteries: lithium, the light metal that’s a heavyweight when it comes to energy storage.

Lithium-ion batteries aren’t just used for electric cars and energy storage. They’re perhaps best known for powering a wide array of portable consumer electronics, such as smartphones and laptops. Lithium, itself, is also used to make less glamorous products, such as grease and glass.

As electric vehicles and renewables go mainstream, global demand for lithium is expected to soar. Indeed, investment banks from Deutsche to Goldman have been trying to outdo each other with forecasts of demand growth ranging from 60% to 250% over the next several years.

Unlike the wildcatters, Lithium’s Big Three already own and operate productive resources and boast commanding market shares to go along with them. 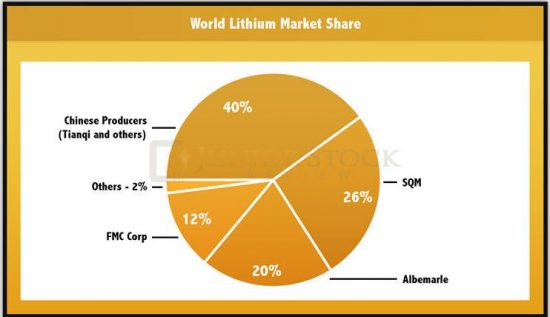 Like many of the battery makers, the three lithium giants have other businesses as well, ranging from agricultural products to nutrition.

Among the three, SQM’s lithium segment made the biggest contribution to profits, at around 55.5% for full-year 2016, while Albemarle’s lithium business had a respectable second-place showing, at 40.1%. FMC’s lithium division accounted for just 11.0% of profits last year.

In terms of dividends, SQM offers more for income investors. Its ADR currently yields 4.2%, while shares of Albemarle yield just 1.2%.

But while both firms are forecast to enjoy strong earnings growth trajectories, Wall Street analysts are much more bullish on Albemarle at present.

This is likely due to the possibility that the Chilean government could terminate SQM’s lease for its premier lithium resource in Salar de Atacama. Even if the odds of that happening are low, that’s a serious overhang for the stock, especially given that it currently trades at an ultra-premium valuation.

Of course, with a forward price-to-earnings ratio of 25.4, Albemarle is hardly cheap either. But its earnings visibility is far less cloudy.