The Mixed Bag of Investor Activism

Retail investors are generally passive investors. Their ownership of shares in a public company usually amounts to little more than checking the stock price and company news, and perhaps occasionally submitting votes by proxy. Rarely do they ever have the power to effect changes in the company. If a retail investor doesn’t like what management is doing, his recourse is usually to sell his shares in the company.

Some institutional investors, such as hedge funds and private-equity fund, however, have the combination of buying power to purchase enough shares and the influence to sway shareholder votes to put public pressure on a company’s management to make meaningful changes. Activist investors will pounce if they believe that a company has been, in their opinion, ineptly managed and shareholder value can be created (i.e., cause the share price to go up) if certain reforms are made internally. They usually start by seeking changes on the board of directors, which then may lead to personnel changes at the exec level and business strategic adjustments.

The incumbent management, the targets of investor activism, of course, is usually not very receptive of the challenge to its power. This can lead to a protracted—and heated—proxy fight to rally support from other shareholders.

Of course, activist investors don’t go through the trouble out of altruism. If they succeed in boosting a company’s stock price, they stand to make a lot of money. This doesn’t stop other shareholders from benefiting from a higher stock price, however. Indeed, successful investor activism could be a rising tide that lifts other boats.

An example of success investor activism is a story we’ve followed in our premium publication Brain Trust Profits. Dan Loeb (of the hedge fund Third Point) targeted Sotheby’s (BID). After a protracted fight, he managed to settle with the company and installed himself and two allies on the board. This eventually led to the ousting of then CEO William Ruprecht and the hiring of Tad Smith in early 2015. With a successful run as CEO and President at The Madison Square Garden Company (NYSE: MSG) under his belt prior to his transition to Sotheby’s, Smith overhauled his new company’s marketing plan and brought Sotheby’s into the modern digital age. Two years later, the stock price tells the story. 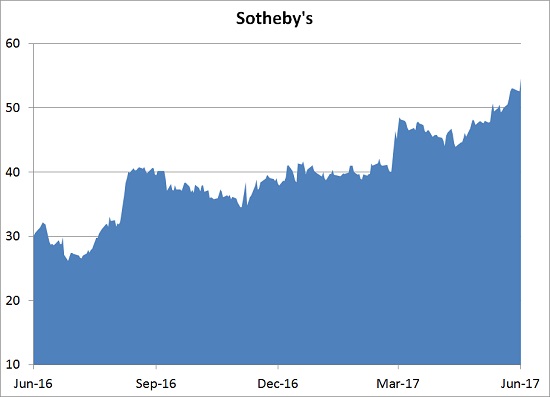 Not all investor activism results in successful turnarounds however. For instance, Bill Ackman’s (Pershing Square) high-profile intervention at JC Penney (NYSE: JCP) failed to stop the company’s downward spiral. JCP now trades at around $5 a share; it was above $30 when Ackman took a huge position in the stock.

Sometimes, the activist fails and the share price suffers. Earlier this year, activist hedge fund Sarissa Capital put drug royalty company Innoviva’s (INVA) management in its crosshairs. Chief among Sarissa’s criticism of those at the helm at Innoviva were allegedly excessive executive compensation and wasteful allocation of capital.

As Sarissa’s efforts to place three of its handpicked candidates on Innoviva’s board gathered steam, INVA rallied in anticipation of management change, but in the end company-backed incumbent board members won a close proxy vote in April. The share price immediately fell steeply as shareholders hoping for changes bailed. Investors should also beware that activist investors who lose the proxy fight could give up and sell all of their stake, which would put downward pressure on the share price.

More recently, one of our favorite hedge funds, Marcato Capital Management, is seeking a management and strategic overhaul at Buffalo Wild Wings (Nasdaq: BWLD). Marcato founder Mick McGuire, who bought the stock at around $140 a share, says that the share price could triple if the company refranchised most of its stores—selling company-operated stores to franchisees. He proposes changing from Buffalo’s 50-50 split to a 90-10 split. Franchise stores yield lower revenues but much higher operating margins for restaurant chains due to greatly reduced costs. He nominated himself and three others for the nine-member board and called for CEO Sally Smith—at the helm for more than 20 years—to resign.

While refranchising theoretically should improve Buffalo’s profit margins, there are disruption risks associated with refranchising a large number of store units in a relative short amount of time. Moreover, Buffalo—as well as other restaurants—face structural headwinds including the tendency for the younger generation to more frequently cook at home and order delivery, weaker foot travel to malls and a fall in sports viewership.

After back-and-forth volleys against one another between Marcato and Buffalo management, the vote finally occurred three days ago last Friday. As evident by BWLD’s Friday intraday price swings, it was quite a roller coaster ride. First came unsubstantiated rumors that Marcato was negotiating to sell its shares, which caused a swift $6 dip in price, then came the announcement that Sally Smith will retire at the end of the year, a sign that the Marcato camp may have won, which caused the price spike before tapering off in late trading.

By the afternoon, Marcato released a statement declaring that McGuire and two of his three nominees had won election. Now that shareholders have voiced their support for Marcato, changes will be afoot. A 90 percent refranchise model, as McGuires wants, may be too aggressive to implement in practice in anything less than five years. A target refranchise ratio in the neighborhood of 70-30 is probably more realistic over the next few years. Whether the changes will result in a doubling or tripling as McGuire predicted remains to be seen.