Conventional wisdom held that the election of Donald Trump was going to be bad news for renewable energy. It seemed likely that if his campaign promises turned into policy, then those decisions would likely slow growth in the sector. But as I wrote just before the election, even if Trump did win, “renewables have momentum and will continue to grow…”

Of course, he did win, and his picks for EPA Administrator, Secretary of Energy and Secretary of the Interior all signaled his intent to roll back environmental regulations (which were beneficial to the renewable sector) that the Obama Administration had passed. President Trump has spent his time in office so far doing just that; undoing regulations and trying to fulfill his campaign promise to revive the coal industry. The latest development in that area is President Trump’s announcement that the U.S. will pull out of the Paris Accord on climate change.

The intricacies around the Paris Accord are too extensive for a brief post. For now, suffice to say that pulling out of the agreement is not apocalyptic, as some have portrayed. The treaty was non-binding, and analysis by the International Energy Agency concluded that the agreed upon measures fell far short of what was needed to achieve the treaty’s goals.

Further, U.S. emissions are not going to be the primary driver of global emissions in the years ahead. At present, carbon dioxide emissions in the Asia Pacific region are nearly double the combined emissions of the U.S. and the European Union, and they are rising rapidly: 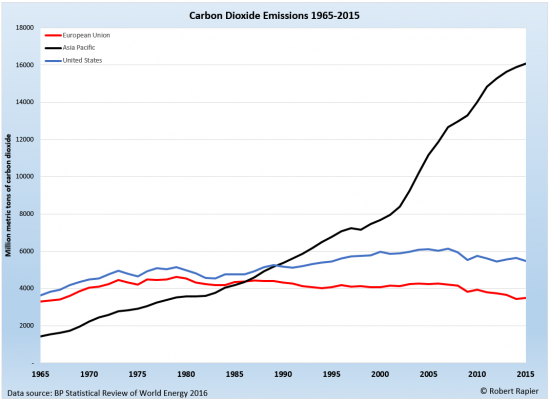 On the other hand, it may not have cost the U.S. a lot to stay in the treaty, because it is nonbinding. We could have stayed in with little downside, but instead, we have ceded leadership on this issue to others. That could be a problem down the road, as some countries may opt not to trade with a country that isn’t a participant. We could also lose our advantage in the cleantech industry to other nations. It wouldn’t be the first such industry the U.S. has lost.

In any case, today I want to look at how the solar power industry has fared since Donald Trump was elected. The Guggenheim Solar ETF (NYSE: TAN) proportionally invests in all of the securities comprising the MAC Global Solar Energy Index. This global index is designed to track companies within several business segments of the solar power industry. At present, the Guggenheim Solar ETF’s Top 10 holdings, along with the percentage weighting, are:

The Guggenheim Solar ETF declined leading up to the election and fell a bit further after Trump was elected. But this year it has bounced back despite the moves made by the Trump Administration. Year-to-date, TAN shares have risen by 11%, pulling back only slightly in the wake of the Paris Accord exit. The yield, based on the most recent December, is 4.5% on an annualized basis.

My colleague John Persinos, who is the managing editor of our flagship publication Personal Finance, noted that investors overreacted by punishing good solar companies following the President’s decision to withdraw from the Paris Accord. As John correctly noted:

“For years, the dynamic was simple: solar energy’s attractiveness was tied to the cost of oil, with cheaper oil undermining the economic case for solar. That’s no longer the case. Solar marches to its own tune, regardless of oil price fluctuations. The same goes for government incentives. Solar has matured; favorable regulatory policy such as the Paris accord is nice, but not a must.“

It’s hard to argue that President Trump’s decisions help renewables like solar power, but I agree that the industry has momentum and has reached the point of no return. The solar revolution is now unstoppable.

We have long recognized the growth potential of solar at The Energy Strategist. Consider subscribing to see which of the solar stocks mentioned above are currently in our portfolios.