A Record Year For Renewables

The Renewable Energy Policy Network for the 21st Century (REN21) connects a wide variety of stakeholders to advance renewable energy. REN21 also publishes what I believe to be the world’s most comprehensive publicly available report on global renewable energy developments.

For the past eight years, I have had the pleasure of serving as a contributor and reviewer for REN21’s annual report. This gives me an early look at renewable energy developments that are released to the rest of the world each June — which is when I can finally share results with readers.

The Renewables 2017 Global Status Report (GSR) was finally released last week, so today I want to share a few highlights from this year’s report.

New investment in renewable energy fell from $312 billion in 2015 to $242 billion in 2016, but because of declining costs, this was still enough to result in a new record installation of renewable power capacity worldwide.

Among all countries, China invested the most money in renewable energy, and made the most capacity additions of any country in solar photovoltaics (PV), hydropower, wind power and solar water heating. The U.S. was in second place for total renewable energy investments and made the largest capacity additions among all countries for ethanol and biodiesel capacity.

At year-end 2016, China had the most overall renewable energy capacity (including hydropower), followed by the U.S., Brazil, Germany and Canada. China was first in installed capacity for solar PV, wind power, and hydropower. The U.S. was first in biopower, geothermal and renewable fuels. On a per capita basis, Germany was first in solar PV capacity, and Denmark was first in wind power capacity.

Solar PV capacity continued along its exponential growth trajectory of the past decade, and has now risen by a factor of 50 since 2006: 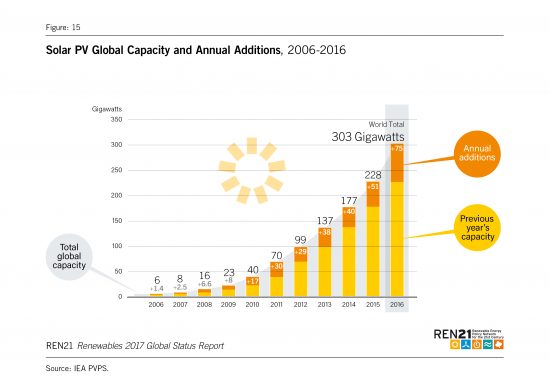 Wind power also grew briskly, and despite the blistering growth pace of solar PV, it will likely be at least five more years before global solar PV capacity exceeds that of wind capacity: 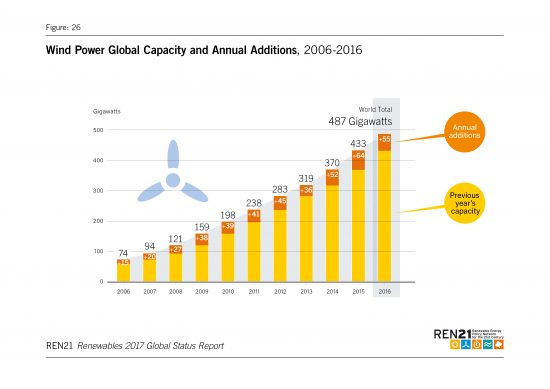 But now let me bring it all into perspective. Fossil fuels and nuclear power still supply 80.7% (full-year 2015 numbers) of the world’s primary energy consumption. Over the past three years, the fossil fuel/nuclear share declined by only 0.3%. The main reason renewables aren’t taking a bigger bite from our traditional energy sources is that overall global energy consumption is growing, and renewables can hardly keep pace with growing demand.

These numbers reiterate the thesis I have stated here many times. It is possible for renewables and electric vehicles to grow explosively, but because they are starting from such a low level, and because overall demand is growing, they are not reducing fossil fuel demand as many pundits have predicted.

As a result, I remain bullish on long-term demand for oil and natural gas, while favoring certain renewable energy companies. In fact, despite the bear market in the energy sector, one of the solar companies in The Energy Strategist portfolio is our top performer overall with a year-to-date increase of 54%. Consider subscribing for more information on our portfolio holdings.