A Tale of Two Offshore Drillers

It is difficult to find a more hated industry on Wall Street than offshore drilling right now. One of the ugliest stocks in the space, Seadrill (NYSE: SDRL), closed trading on Friday at $0.44 a share. Exactly three years ago, it was at $39.43 a share, or almost 90-times higher. Put another way, in just three years, SDRL has lost 99 percent of its market value.

What happened? The oil market crash.

Drilling hundreds and thousands of meters beneath the ocean floor is an expensive and risky endeavor. When oil was trading in triple digits, the potential payoff made the risk taking worthwhile. But when oil prices cratered and oil and gas companies had to tighten their belts, the costly deepwater projects were usually the first to get axed.

To make matters worse, during the good times, the offshore drillers had become too aggressive and overbuilt, increasing the supply of rigs and ships, throwing the market even more off balance.

The charts below, courtesy of IHS Markit, tell the story. With lower demand and an oversupply, dayrates and utilization rates headed south. Drillers had more trouble finding and keeping customers, and they made less money per customer. The net result is fading revenues and earnings plus shrinking backlogs, which point to continued revenue decline. 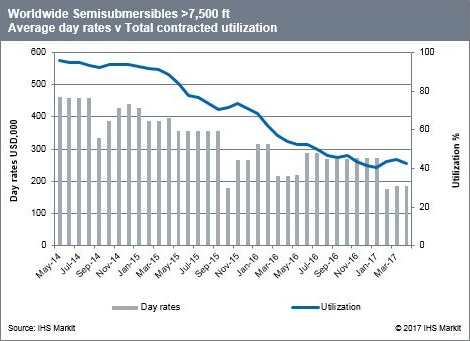 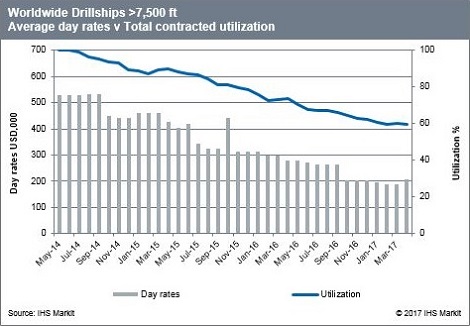 Seadrill was the most aggressive offshore rig owner in the industry in expanding its fleet, including committing to 7th-generation ultra-deepwater ships, fancy but expensive units that cost more than half a billion dollars each to build. It spent more money on capital expenditures than it generated from operations, and had to close the gap with debt—plenty of it. This aggressive strategy works if the industry stays strong, but the fall in oil prices sapped demand. And so, today, even after some maneuvering, it has more than $14 billion in debt and liabilities and sits on the cusp of potential bankruptcy.

Seadrill’s CEO will be out at the end of June and the company is now involved in debt restructuring negotiations with creditors. Filing for bankruptcy protection is a likely option if negotiations fail. Either way, it looks inevitable that creditors will convert their debt into equity in the company. Common shareholders will be left with heavy dilution, and ownership of but a tiny sliver of the company.

Diamond Offshore (NYSE: DO), on the other hand, remained more financially conservative and abstained from the go-for-broke strategy that left Seadrill in its current position.

Revenues and earnings have eroded, as you may expect, but Diamond Offshore has remained profitable through out the current extreme industry downturn even as its fleet’s utilization rate has fallen below 50 percent. 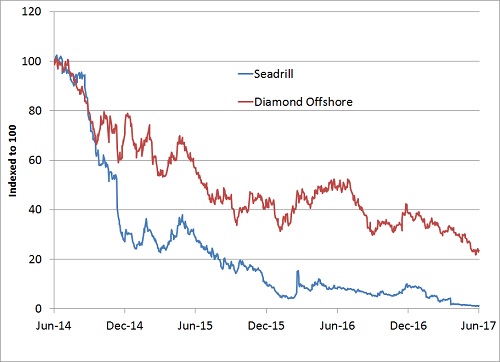 Of course, as you can see from the chart above, its share price has been devastated as well, but unlike Seadrill, the company is not facing any existential crisis. It’s a matter of weathering through the downturn. It has one of the larger backlogs and younger fleets in the industry, so it’s well positioned for the eventual rebound.

Despite the ugliness, the offshore drilling industry isn’t dead. Offshore exploration, particularly deepwater, remains the last frontier for potential major oil discoveries. The lack of new significant discoveries, plus the reduction in capital investment due to the oil price decline, has dropped the oil industry’s reserve-replacement ratio has fallen to 32 percent. This means that oil companies are adding proved reserves at a rate less than one third of the production rate. Depletion of reserves are accelerating and sooner or later, oil companies will have to look offshore again, especially as the cost profile of some deepwater projects now can compete on a financial return basis with that of shale operations.

Indeed, Diamond Offshore and other offshore operators have reported that they are beginning to see more international oil companies (their customers) consider restarting offshore projects and they are seeing more tender activity. However, it will likely take multiple quarters for revenues to significantly rebound. And even if demand picks up, the oversupply is still a major problem to work through, so a quick bottom and recovery is unlikely.

Still, for the long-sighted investor, it would be prudent to keep Diamond Offshore, and other deepwater operators, on the radar. Even Seadrill could enjoy a share price jolt if it reaches a restructuring deal, depending on the terms. However, between the two, DO is clearly the less risky to make right now, even if SDRL’s upside could eventually turn out to be higher in the long run.