Will These Wings Fly?

Several weeks ago as we discussed the mixed success of investor activism, we noted that Marcato Capital had just won a proxy fight against the incumbent Buffalo Wild Wings (Nasdaq: BWLD) leadership. Marcato chief Mick McGuire successfully installed himself and two allies on the board, and forced CEO Sally Smith to announce that she will retire before the end of the year. It has been four weeks since BWLD shareholders threw their support behind Marcato. Let’s see how the stock has fared since.

While the initial market reaction was positive, the euphoria over the board shakeup was quickly replaced by the reality of a company battling sluggish same-store sales trends. Revenue data alone doesn’t tell the whole story because new restaurant openings contribute revenue growth that can mask underlying problems. Same-store-sales figures, however, only compares a restaurant unit to itself and thus give a clearer picture of how the overall chain is performing. 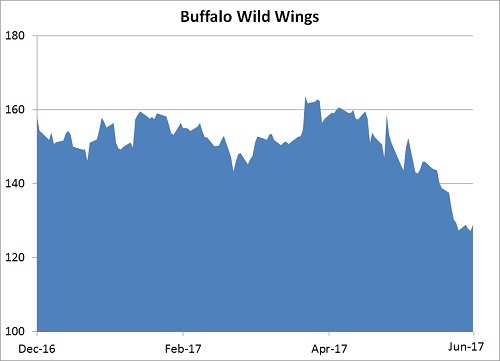 In the first quarter this year, same-stores sales for company-owned restaurants rebounded to grow 0.5 percent. For franchisee-owned restaurants, the improvement was slightly bigger, at 0.6 percent. It’s a marked improvement over the prior quarter, which saw an ugly 4 percent fall for company-owned units, and a 3.9 percent decline at franchisee-operated restaurants. The rebound came with a jump in cost of sales, partly explained by increased promotions and higher traditional wing costs.

Mick McGuire’s plan to refranchise company-owned restaurants to a target split of 90:10 can indeed free up capital and improve margins, but to refranchise some 500 restaurants—since the proxy vote, the company has announced putting up 83 locations for sale—is no simple task and will probably take a long time to gradually execute. Buffalo has about 1,250 restaurants, split about half and half between company owned and franchised—the industry average is about 80 percent franchised. In reality, McGuire’s refranchise vision will likely only be partially implemented, which actually may not be a bad thing.

Moreover, the refranchise plan on its own it doesn’t directly address what appear to be unfavorable structure trends. Costs may be cyclical and come down on their own, but the younger generations are increasingly unlikely to eat out. Rather, the proliferation of on-demand entertainment allows them to view sporting and other events and hang out with friends from the comfort of their homes.

With foot traffic slowing, the company last year began to strategically shift focus on takeouts—a growing trend—as a ways to supplement its dine-in business. It’s also relying on promotions to entice customers. This month, the company announced national rollout of its Blazin’ Royalty reward program after adequate success in select test markets. Basically, customers can earn points and redeem them for credit (i.e., discount), thereby incentivizing them to return to “B-Dubs” to earn more points. For a company that’s already experienced declining margins, heavily relying on promotions could reduce them further. But if the company can free up capital through refranchising, it would at least give Buffalo more financial flexibility to try new tactics.

Perhaps as a tactic to fight off Marcato and to make an argument that it’s creating shareholder value, the company had aggressively expanded its share repurchase program. After spending about $233 million for this purpose in 2016, at the beginning of this year the board voted to expand the program by $400 million to $900 million (including money already spent on repurchases). It has since spent another $212 million in the first quarter and a yet-to-be-determined amount in the second quarter. Some of this money may be better off strategically investing to restore growth, especially since the shares were repurchased at a significantly higher price at the current market price.

BWLD is currently valued at about 21-times projected forward (12 months) earnings. The multiple is at around a four-year low but it’s still higher than that of the overall market. Thus, even after a significant dip the stock isn’t yet a value play. McGuire is a very smart guy, and chances are the company will be able to make at least some improvements and the share price offers some potential upside. But as noted before, it can sometimes take years after an activist investor makes his move for a turnaround to take effect and sometimes a turnaround never happens. There’s no rush to jump into the stock now. Wait for indications of improvement or a further price dip.